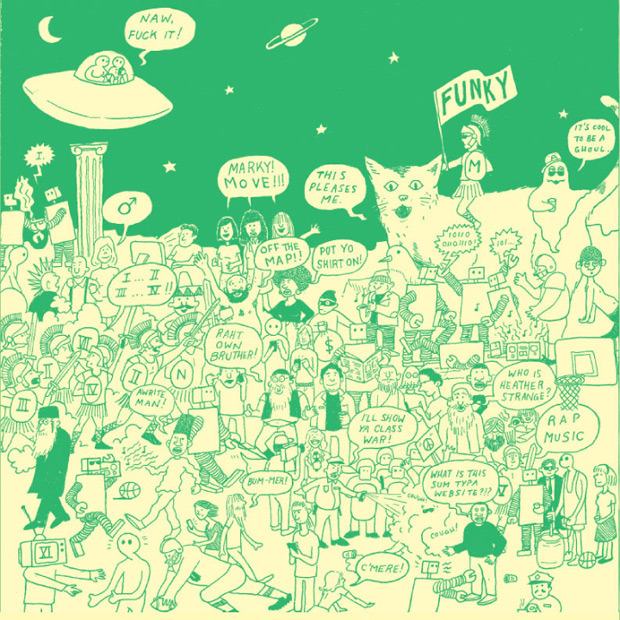 Andrew Savage of Fergus & Geronimo has moved into one of the quiet blocks of Halsey Street in Bed-Stuy. I visited him on Sunday and he seemed content about the amount of space he has, including the basement where he can practice, unlike his old Williamsburg apartment. Stacked with coloring pens and little 3.5 by 5.5 brown-covered moleskins, his desk and iMac take up one of the corners of the living room. On the other side are his couch and coffee table, and his record collection and player. Above the records is a work of art that his mom made. He says it’s been with him ever since she gave it to him, and moves with him everywhere he moves to.

When I got there, Savage had been listening to Tyvek and drawing some Huckleberry hounds on a piece of paper that he said was bigger than his usual canvas. He writes and draws in his journals all the time, and it’s where he pulls out images from when it’s time to create art for his musical ventures; same goes for the cover of their new LP, Funky Was The State Of Affairs, a concept album revolving around an alien invasion, which is out today for grabs. Talking about the cover, he showed me to his bedroom and kitchen. It just so happens that the color scheme is a subconscious coincidence.

You started out in Denton, and you always had music projects going on, but it seems like primarily, you used to be a visual artist? Did you go to art school? Was it just something you always did on the side? How was life?

Yes, that's true, I was born in Denton, TX, which means I hold open doors for women, and I measure distance in its approximation to “yonder”. I don't really remember a time when I wasn't drawing, it's just something I've always enjoyed. Yes, I did go to art school, though it's not something I advertise. I have a BFA in Watercolor, which is initially impressive when you tell people, because it sounds like such a novelty. Actually I just chose that major because it was something like six credit hours shorter than a regular painting BFA. But I've never stopped doing art. I've played in bands since I was 13, and music and art have always been these forces that I never spent much time distinguishing. To me it was always like “Hey I'm an artist, I make sound and pictures.” It's all about creating things, leaving your mark, whether it's in the soundscape or the visual world. Sometimes, if I have a dominant project, one that is taking up most of my creative energy, the others start to settle in the periphery so that I can finish an album or an artwork. For the most part, I enjoy multitasking and having a lot of stuff going on in my head.

You write all of the lyrics for your music?

Yeah, I do. Writing is kind of the third side of the creative triangle for me. I've been interested in it for a long time. A lot of the times it's the funnest part. A lot of my art has become heavily text based, which I think is just the result of my interests bleeding into one another. Pettibon, Rauschenberg, Basquiat, and Crumb all use text in their art, and they are all people I admire. I think there is an element of vulnerability when an artist uses his own handwriting in their work. Writing is just another vehicle for expression, and the fact that it can be both a sound and visual experience appeals to me greatly. I've done a few tattoos for people, and I actually recently had a friend who just got some of my handwriting inked on her, which I was pretty honored by.

The drawings in the inner sleeve seem pretty self-explanatory especially after hearing the record, but is there something you want to say about the cat?

Well he is supposed to be looking at the bird, like he is gonna eat it. Hence “this pleases me”. It's funny because I think the crew at Hardly Art appreciated the cat a lot. I just got our copies of the LP in the mail and, it comes with a digital download card, which is a zoom in on the cat, mounted by the funky Roman. I got a good laugh out of that. Doing a “Where's Waldo” style drawing is hard! That cat filled up a lot of space that saved me from drawing about 8 humans/aliens.

What about the guy on the cover?

Seriously funky, which I hope is the goal of anybody that is going listen to that album. Ultimately, I wanted it to be the type of LP cover that people would see and become interested in. Like “Hey, I wanna listen to THAT one!” I mean they say you can't judge a book by it's cover, but I realize that people are going to do that anyway. Hey, why not? The way I see it, if I'm gonna spend all this time working on an album, I want it to look nice. The same goes for the cover of the Parquet Courts LP. I really admire musicians who have a very realized visual narrative. Like in the way Funkadelic used Pedro Bell, or SST used Raymond Pettibon. But to get back to your questions about the guy on the cover of FWTSOA… I guess one could sort of interpret the record as being that guys' experience.

His other band, Parquet Courts, also has a record coming out Aug 18th, the release party is at DBA:

For artists I'll say Dave Bay, Adam Cahoon and Bradley Kerl. All of those guys are from Denton, and they are relatively unknown. Dave actually introduced me to the joys of black ink and brush, and he has a great hand. He does a pretty excellent drawing blog. I just Googled Adam Cahoon and it turns out there is another artist with the same name, but I'm pretty sure my friend Adam has no web presence as an artist. He did the LP cover for the Wax Museums LP Eye Times, which is pretty killer. Bradley is a painter and photographer that lives in Houston and is getting an MFA, he and I have collaborated pretty frequently in both art and music.

My favorite lyricists would probably be Mark E. Smith, David Berman, Kevin Boyer from Tyvek writes some great stuff… Josh Macero from Thomas Function. You could probably figure out my favorite bands from there. I really like the visual aesthetic that the French band Cheveu has. As far as writing I like Dostoyevsky, Wallace, Pynchon, DeLillo. The usual suspects I'm sure.