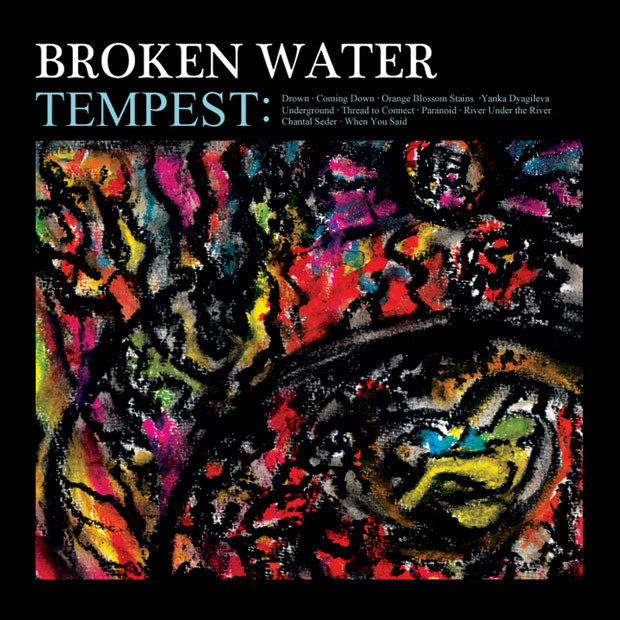 Broken Water has been working on two records, Tempest, which will come out May 29th on Hardly Art, and Seaside and Sedmikrasky, which they hope to release on May 1st.

Guitarist Jon Hanna, who painted the cover for Tempest, says the art is a loose impression of a picture of an LSD tripping room from Life Magazine, 1966. I saw the specks of a rainbow but I wouldn't have thought. The imploding, burgeoning color-repitition fits the band's noisy drone. “It had been about 5 years or so since I did any real painting and we needed to come up with some artwork for this record so I took a stab at it,” says Hanna, “Abby [Ingram] and Kanako [Pooknyw] did most of the artwork for all our previous records and it seemed as good a time as any to get back into visual art.” The LP also holds collaborative hand-written lyric-inserts and drawings by the band.

The choice of inserting hand-written things:

Kanako: We tend to focus on the instrumentation of the compositions and a majority of our songs do not have lyrics the first few days we step into the studio. Wild, huh? Stan Wright, audio engineer for Tempest (as well as Peripheral Star and Seaside and Sedmikrasy), laughed at us because the three of us were arguing over who has to write lyrics and sing on the songs. Stan shared a story about 36 Mafia recording down the hall from his back in Memphis, their engineer demanding that they leave their guns with the receptionist because they kept drawing them on each other fighting who got to rap to what song. I guess we have the opposite issue.

Anyway, my whole point with this tangent is that all these slips of random paper we scrounged up in the studio or out of Abby’s bag to scribble lyrics down on very last min…I collected them because I thought it would be cool to see them all together. When our label encouraged us to include lyrics it seemed like our pile of scribbles best represented where we were in the process while we recorded these songs. When Abby was laying out the lyrics insert she included the drawings that Jon, Abby and I made after we finished the record while brainstorming record cover ideas for Tempest. My drawing is the self portrait, Jon's is the hand petting a cat.

The closing track, When You Said (you can listen to the opening, Drown, below):

Jon: I wrote the music for “When You Said” sometime last summer (2011) wanting to catch the heavy mid-tempo vibe of some of the songs off our first record, Whet. The words I didn't write until the day of the NUTS! #8 zine release show in September where we performed it. They're based on some stuff that was going on for me at the time, but like most of my lyrics I tried to make them just ambiguous enough so anyone could have their own personal interpretation.

The billion-dollar question: Are the songs in the record the same thing without the album art?

Jon: I think the songs definitely stand on their own without the artwork, but that's not to say that I'd be happy just slapping some random picture on the cover and saying, 'Done!' The painting is more of a complimentary piece to songs and I think it works pretty well conveying a 'tempest.' Actually, I think the songs on the record are what really give the artwork itself meaning.

Tempest comes from thoughts on “Russian punk-rock poets, the ocean, drowning, the Occupy movement, touring, nightmares, dreams, memories, and so on.

Abby: I hope people like it, but part of what's really special about sharing music that you make with other people is the variety of response and personal associations. I don't have a rigid view on how I want this to be seen or heard, just like I don't want to be told how to feel/hear/see things. I feel like a lot of the content (for my part at least) was personally fueled by nightmares/dreams, and the disintegration of reality and the questioning of memories as fictional and archetypal. That is where I’m coming from. So it's very loose. I do hope you hear an expression that sounds new. I don't like to think about being boring or redundant. But that's part of my human ego, too. Be bored if you are!

As for Seaside & Sedmikrasky, the band wants you to help them release it. Seaside is based on the book “In The Realm of the Hungry Ghost” by Dr. Gabor Mate and Sedmikrasky is a tribute to Vera Chytilová’s badass Czech New Wave from the sixties; a psychedelic explosion in itself with a series of surreal episodes of two young girls, and keleidoscope colors and cuts. You can watch the movie here.

“We were riding a magical wave to Psychodelia (that is a real place) when we recorded this. It was fun! We were bad! I play upright piano and drums, Abby plays guitar and Jon stumbled into the room at one point and picked up a bass. That music will never happen again… I don't think we could pull it off if we tried. I'm glad I managed to record it and that it will be released into the world,” says Pooknyw.