Derek Erdman: On the Doofy Side of Eccentric 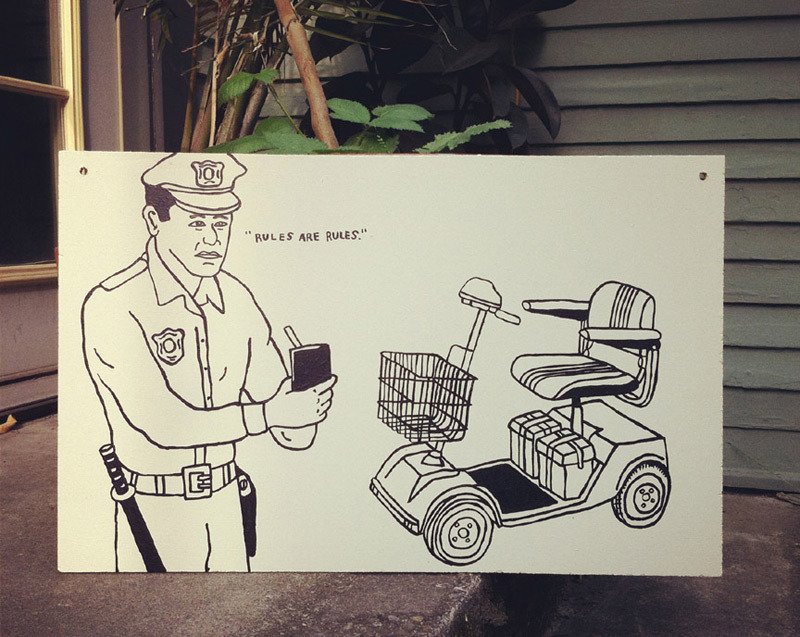 Derek Erdman is a doofy man with a Black Flag tattoo and an Etsy shop. He makes and sells paintings but ICYMI, he was on Craigslist recently, trying to sell Kurt Cobain’s skis, telephone, and broken video game set. A lot of “serious collectors” were intrigued, as was CBC radio and Seattle’s local TV news crew but Erdman was never Cobain’s roommate, nor is he the bass player of 90s band Gruntruck. He doesn’t own any of the things up for sale either because they are pictures from the Internet. In an interview with Revolt, he says he created the ad as a diversion after being unable to attend to his errand at Sub Pop, where he is the receptionist, but it is suspected that he just needed to express his feelings.

“I used to live with Kurt Cobain back in the 90s and I have been holding on to a bunch of his stuff that he left in a box when he moved out. He owed us rent and said he would get the box when he came back and gave us money but he never came back, then when he was famous he never really talked to any of us again because Courtney [Love] never liked us but she’s a dick so no hard feelings.“

You've been making art for a long time—any comments?

Do I have comments on making art for a long time? I guess not really. I don't even understand what that means.

What does being a receptionist at Sub Pop mean? Do you get to answer a lot of phone calls? How long have you been working there?

It mostly means that I answer and direct emails and phone calls. I also order office supplies and unload the dishwasher. I do get to answer a lot of phone calls. I've been working here for a year.

Did you grow up with guinea pigs in the house?

If this is your only round of questions, this was a really good interview. Thanks for writing!

PrevPreviousReservoir Sound Showcase at The Paper Box
NextShows to Watch: SXSW 2014Next