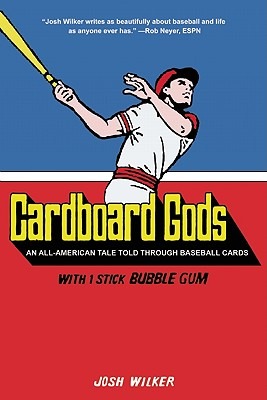 Josh Wilker and I almost have the same name–but different, like when you buy Creme-Os instead of Oreos.

Josh Wilker wrote this book about old baseball cards called Cardboard Gods. Here is the Cardboard Gods blog. Also, Josh made an appearance over at GQ.com. In case you're wondering, he's the Oreos, I'm the Creme-Os.

1. Novelization of
The Bad News Bears in Breaking Training by Richard Woodley.

I’m currently working on
a book about the cinematic masterpiece that this novel is based on,
and though the novel fails to convey the film-carrying charisma of
Jackie
Earle Haley’s Kelly Leak, the coolest kid who ever lived, its periodic
expansions upon and diversions from the storylines of the
underappreciated
sequel suggest that there are multiple Breaking Training
universes.
Surely in one of these universes the boys never get out of the
customized
van and are still roaming the land to this day.

2.
April, May, and So On by François Camoin.

François Camoin’s stories
always put a hand on my shoulder and make me feel calm, even though,
or perhaps because, they are always about people with the same gnawing
ache in their stomach as I have when I reach for these stories like
medicine. Though the finely ironic tales of people adrift in an absurd
world bear some resemblance to the better-known stories of Frederick
Barthleme, there’s more mess and tenderness in them.

3.
Raise High the Roofbeams, Carpenters and
Seymour An Introduction by J.D. Salinger.

I went on a Salinger jag after
the author’s recent death, reading everything except for The Catcher
in the Rye, which is already and forever in my yearly rotation.
Raise High is a perfectly executed comic yarn that somehow points
with more clarity than Salinger ever managed anywhere else toward the
ineffable bliss of the crucified savior of his fictional universe,
Seymour
Glass. The second, later title shows the author in a compelling but
ultimately futile wrestling match with that ineffability. He is getting
farther away from being able to say who Seymour is. (I know how he
feels.
In the book about my life, I try and fail to explain the Seymour Glass
of 1970s baseball, Mark Fidrych.)

This is a 4/22/09 post on the
Topps Archives blog that details and shares artifacts from the 1975
Joe Garagiola/Bazooka Big League Bubble Gum Blowing Championship, a
contest that culminated in a special 1976 baseball card featuring
champion
bubble-blower Kurt Bevacqua producing from his lips a rubbery extrusion
the size of a second head. This card has fascinated me almost my whole
life, and the Topps Archives post provides a glimpse behind the scenes.
I can’t think of any event I’d rather have a behind-the-scenes peek
at.

The leisurely narration of
this novel about the adolescent protagonist’s summer in a black resort
community in Long Island snuck up on me. It reads at first more like
a reminiscence journal than a heavily plotted novel, but this is only
because the subject of the book is the remembering mind and not some
hyperreal “plotted” idealization of a memory. The author’s remembering
mind keeps reaching for the past, and as the book neared its end, the
end of that last teenage summer, I was reaching right along with it,
and I could feel my heart breaking. September is coming and the town
is thinning out and everyone is returning to their regular lives and
I don’t want to go.