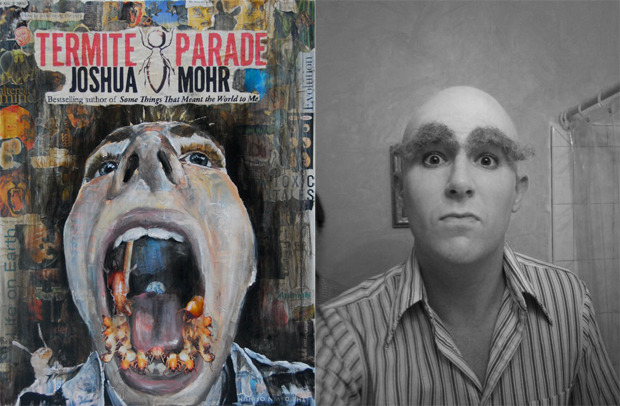 Joshua Mohr's first novel, Some Things That Meant The World To Me, was a San Francisco Chronicle best-seller and his new one, Termite Parade just came out from Two Dollar Radio.

Termite Parade is about a woman named Mired, who describes herself as the “bastard daughter of a menage a trois between Fyodor Dostoyevsky, Sylvia Plath, and Eeyore.” Mired has a Mt. Rushmore of Male Failures and her newest possible entry is Derek, an auto mechanic who may or may not be infested with termites.

Joshua Mohr lives in San Francisco and has challenged Nicholas Sparks to a fistfight (which hasn't happened yet). Here are the five best things he's read recently:

01 The best thing I've read lately was an email I received after hosting a literacy benefit in Brooklyn a couple months back. The fundraising event was for an organization called Girls Write Now, which does amazing things in the New York public high schools. Anyway, the email was from someone who had been mentored by GWN, and she said that without their help, she'd never have gotten into college. How badass is that? As a fiction writer, I spend so much time locked away in my own narcissism that it was wonderful to be a part of something that actually helps people.

02 Have you read/seen anything about this new game show on ABC called Downfall? It's one of the most disgustingly American ideas in awhile. Part stupidity/part decadence/part entitlement, they actually heave the contestant's prospective prizes off of a skyscraper if they don't win. Now, I'm not a terribly smart person, barely got a BA from a state college (who the hell actually flunks astronomy?), but given America's (irreparably?) damaged international reputation of hogging and wasting every resource we can get our fat, greasy paws on, do we really need to be flinging cars, money, and whatnot off of rooftops? Couldn't they just give the gifts to someone else? Why is such opulent destruction considered entertaining?

03 I live in San Francisco and there's a new print campaign to try and update Smokey the Bear's image so da kidz can relate to his ass. Maybe it's appearing in other cities, 2. I have no idea. IMHO, Smokey's facelift is wonderfully successful. He's got more muscle definition now (grizzlies should have nice tone, after all, climbing trees is rigorous training and their fish-heavy-diet means their protein intake is sky-high). The ad's tag line says, “Get your Smokey on!” OMG, if that doesn't get the kidz to stop their pyromaniac tendencies, will anything ever curb da phenomenon?

04 West of Here – Jonathan Evison's upcoming romp–released February 2011–is beyond fantastic. This guy's imagination makes me sorta jealous, the way he's able to recreate 19th century Pacific Northwest life on the page is jaw-dropping. Pick it up and indulge in one of the best writers working… I predict a bevy of awards for Evison's tome. That's contingent upon, of course, people still reading books in 2011. Fingers crossed.

05 Last but not least, I'd be remiss not to mention my favorite mentally imbalanced athlete, Ron Artest, a basketball player on the LA Lakers. As you may know, his team recently won the NBA title and in the post-game fracas, Artest said to a reporter, “I want to thank my psychiatrist.” Here, here, Mr. Artest: I applaud your honesty. I think we should all walk around thanking our psychiatrists. I'm not being sarcastic about this. I don't know anybody who wouldn't benefit from weekly or bi-weekly decompressions with a shrink. In fact, I said to mine the other day, “Do you think I'm doing all right?” and he said, “Yeah, you're okay, but we can always do better.” So I'll bid adieux with that notion: you, me, and Ron Artest all trying to do better, all trying to make sense out of a world where cars and dollar bills and random prizes fall from the sky.