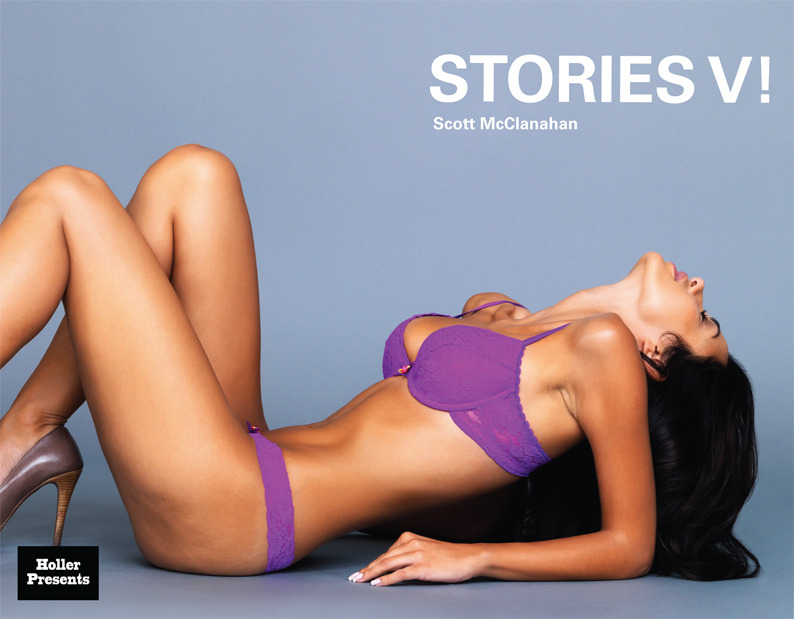 Just knocked out a book by the very awesome Scott McClanahan, who reads like Bukowski with more surprises — it's a laidback style, but there are no mistakes, everything is mentioned for a reason, and best of all McClanahan expertly throws down some twists, sometimes twice, with many of his stories finishing strong, only to get up and charge to yet another end. It was mad fun reading Stories V! and it's made me want to pick up some of his other releases. McClanahan lives and works in West Virginia and he talks below about Superman, psychopaths and self-publishing.

That story “Jenny Sugar” you talk about Superman IV and how it kinda sucked. Which is your favorite Superman movie and what do you make of these remakes as of late?

I hate all Superman movies. I think he’s a communist. Seriously. Never trust a man with red underwear.

Speaking of numbers, this book is labeled as 'Stories V' but you skipped a few numbers from your last edition, Stories II. What's up w/ 3 & 4?

Yeah, people keep mentioning that. I should probably look it up.

I’ve never been that good with numbers, but that’s the West Virginia Public School System for you. Charles Manson is also a product of this school system. He spent his teenage years in Clarksburg.

The casual bro might get confused about the 'real' Scott vs. the 'story' Scott. Are of any these stories true or does that matter at all?

It depends on whether or not you want to sue me.

If you’re planning on bringing a lawsuit, then I would have to say they’re all fiction.

You’re not thinking about suing are you Josh? Pretty much all writers are sociopaths when it comes down to it. Some of the best have even been psychopaths—Malory, etc.

And is the real Scott a writer or a filmmaker? And what film projects are you working on as of late?

I’m neither. Actually, my friend Chris Oxley and I are getting ready to record our first album together with our group The Angel Babies. I’ll include a couple of our demos.

We’re a different kind of group though because we wear deodorant. We’re against beards too. If you have a beard right now, then you probably won’t get The Angel Babies.

That’s a pretty radical statement now in the world of indie lit and indie music. I may be the only male writer in indie lit who wears deodorant. That’s why I’m a revolutionary.

Same as ever really. Teenage pregnancy, prescription drug abuse, welfare fraud, hand grenades and obesity. I was in New York back last year and it really freaked my ass out. I’ve never seen so many skinny people in my life. I wanted to shout, “If I don’t see a fat man wearing a WVU T-shirt in the next fifteen minutes I’m going to go off.”

Thankfully, the one overweight man in the entire city showed up and my panic attack subsided.

A few of your books went through some small presses, but you knocked this out on your film website. Did you like the self-pubbed route? Will you do it again or does it depend on the offers?

I’m not sure if I’ll do it again. I guess everything is self published if you really think about it. I just figured that I could do as bad of a job as most small presses at promoting and selling the books. I think I’m doing a pretty good job so far.

Really, I don’t understand most “literary” culture. Like I hear people all of the time who mention how they are applying for fellowships or will finish their collection at so and so colony.

Do you base your characters on people you know or just archetypes? That guy in 'Dead Baby Jokes' seems to be in every town, but it's still kinda sad, that whole image-making thing.

Sometimes I base them on real people and sometimes I just make them up.

I also really enjoyed the two endings that you gave a few of your stories, especially that one on 'Terrorists,' which was very creative and shocking. Why two endings instead of one?

That’s how life is. My wife was taking care of a guy at the hospital once whose penis was stuck in a two liter bottle. He had been using the empty two liter as his potty at night (of course, they cut away the plastic bottle when he showed up in the ER). Eventually they had to remove a portion of the guy’s penis because some of the tissue had started dying. She told me this story one night, and I figured that would be the end of it.

But then the next week she came home and said, “Remember that guy who got his penis stuck in a two liter. They released him last week, but today he showed up and brought me flowers and a box of donuts.”

So I guess a story doesn’t ever end. There could always be flowers and a box of donuts around the corner.

Besides your own, what's the best book you've read lately?

Kendra Grant Malone is pretty much a God in my world too. Sam Pink and Mary Miller are pretty amazing as well.