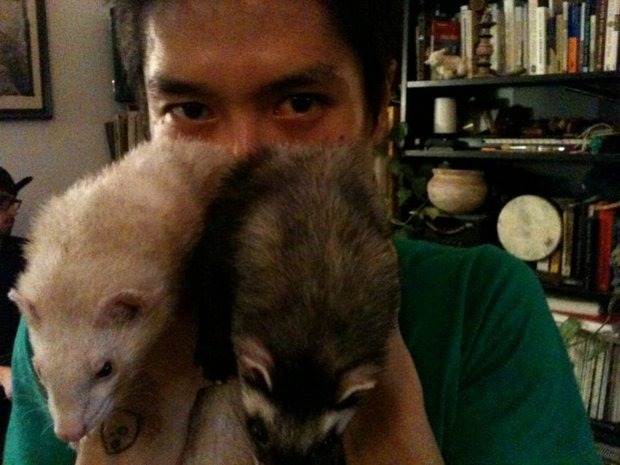 Longtime and astute Codex readers will know I often post about 'indie-lit sensation' Tao Lin. This is because Tao often does other interesting things in addition to writing interesting books. Hence, I write about it.

But there has one major development I have not yet addressed.

I have been ‘slow’ to write about this, not because I don’t think it’s good (it is), but because I’ve been legitimately surprised at the ‘mainstream’ coverage of this signing. The news was first announced in the Wall Street Journal. It’s so uber-important that you have to pay for it. Even online. All the Wall St. people were like riding the subway, reading the Tao Lin news. All the traders were like, screw the AAA bond ratings, Tao’s getting a book deal, what the hell is going on? One has to wonder if this is the real reason why the market is ‘in flux.’

No one is certain what the world is coming to, in a world where Tao Lin gets real money. Hipster Runoff already covered it well, essentially asking will money make Tao lose his desire?

Tao himself isn’t sure, as reflected in this very true Twitter post the ‘unedited’ Tao writes: “felt briefly '100% certain' that i'll never finish my third novel”
Facetious or revealing?
Money brings pressure and performance, no one is sure if Tao can still bring his ‘A-game’ or if his writing will ever be ‘good enough.’
Other coverage on Tao Lin included the NY Observer which lamented the fact that they were scooped by the WSJ. News on Tao is now scoop-worthy.
Still, even with all this coverage (full extent of coverage here), I still managed to ask an exclusive question to Tao.

Here it is and his response:

“do you feel that the news around your new book deal has been a) overhyped b) properly hyped c) underhyped?”

In this context, what else could have been asked? The NY Observer already questioned him about the niceties of publishing house offices. The book will be a semi-autobiographical true story, entitled Taipei, Taiwan.
All the relevant facts are known, granted he has not written much of it yet. All that’s left is the hype game, which may be the only game, which may be what the $50,000 is really on. He is not sure if the book has been ‘overly hyped,’ ‘properly hyped’ or ‘under hyped’ because this is the HYPE.

Perhaps Tao got $50,000 for publicity and (going back to the ‘unedited’ tweet) the novel is always unfolding, there is no end, it’s just ongoing until the ‘end of the contract.’

Maybe the 50 thou is just a ‘salary’ for being Tao. For keeping the hype game on the fast track. For generating posts like these. For throwing words like ‘Vintage Books’ into random conversation. For creating drug-meme sensations and relevant documentary films on the modern lifestyle/brand-engaged young people, to keep the ‘underground’ or the publishing house’s idea of the ‘underground’ engaged. Maybe it’s one big $50,000 atta-boy, and the novel is being written as we speak, just transcripts of conversations, random Twitter essays, drawings, and g-chats, a memoir-cum-factual-fiction story on daily life, just like his other books, but now upping the promo-awareness of the character.

Perhaps this is the opening chapter. Money is money.