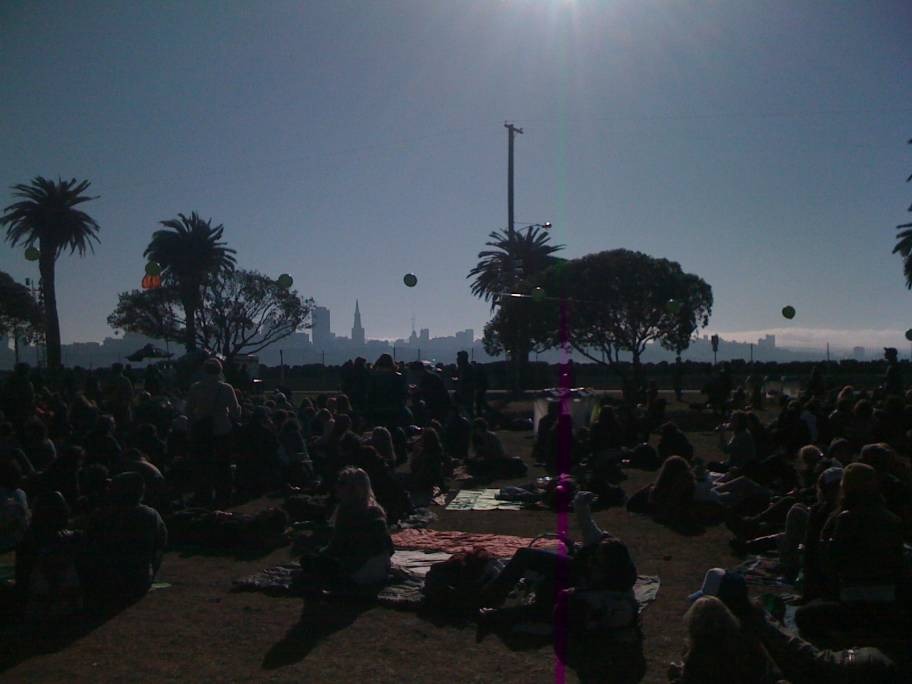 Once again, we returned to our favorite Bay Area island for Treasure Island Music Festival, 2013 edition. For the full photo tour, we encourage you to check out the Festival Report by our creative pro, Jenn Hernandez.

So packing up all tape recorders, cameras, and as many Paleo friendly provisions as possible in a blue skateboard bag (that doubled as a life preserver of self-sustainability), we first made our way downtown. In a swift shuttle ride from Bill Graham Civic Auditorium to Treasure Island, we were greeted by Giraffage chopping up everything he could on the decks and sending it out into smelted sunshine.

But it was this warm glow of EDM-ore that diverted us from considering the soon to be dropping temperatures that made a fog vapor iceberg, surrounding all in the mere minutes and hours to follow. For now we felt prepared. Kick starting his set with the sensational “Dark Denim”, Antwon and his Nature Boy Gang gave a generous helping of Bay style and closing with the glorious Pictureplane by way of Suzanne Vega banger for “Living Every Dream”.

You got to give it up for Antwon, randomly silencing the crowd and inspiring everyone in the audience to sing a call and response version of Backstreet Boy's “I Want it That Way”, beginning with the insinuating random burst of invitational song; “You are…my fire…my one…desire…” It was pure afternoon ridiculousness at its best.

Adult. returned, with intended punctuation and all, to bring more electronic alienation that captivated us over a decade back. The duo donned black leather and even darker vibes that charmed through the electro-clash dark scanning sentiment in the cold refrains of, “you don't know how I feel…” Frontwoman Nicola Kuperus kept commenting on the piercing bright sun, and its contrast to their own pale steez, expressing ship-abandoning desires to hide beneath the stage.

Bringing back some of my favorite early millennial cold beats, “New Object” was a fresh as ever Adult. electric crowd pleaser. Taking refuge in a nearby shady utility booth canopy, Nicola shouted out to her synth studded partner, “Adam, this is where we should have played, in the shade! “Then Robert Delong brought the bleeps, the bloops and joystick controlled post-d-step zaps. Inviting everyone to “change how you feel”, we were fried by a hyper active display of console noodling, and occasional bursts of live drumming. At best he reminded us of our friend Shigeto's pragmatic approach to organic rhythm, and at worst it was left over and disorganized dub-step audio tropes.

And then it happened; the one and only Danny Brown took to the stage in an energetic and jovial fashion. Bringing the “Black Brad Pitt”, “Radio Song”, “Dip”, devil horns and signature tongue-out smile. Possibly one of the highlight performances. Poolside brought the sunny west coast sunshine jams, where the restrained still water sound echoed those former Frisco Disco after hours down tempo jams. Disclosure then brought their talking digital face to lip sync the samples [although we were secretly hoping for a privy screening of their recently banned “Help Me Lose My Mind” video], while DJ Falcon warmed up the festival ravers for Mad Decent's most prized dance hall deluxe commodity, Major Lazer.

Taking a break in VIP to watch a portion of a miserable Oregon vs Cal game, Holy Ghost! then kept the mood electric, providing a dance beat that was more academic than dancehall leaning. The Bridge stage saw Little Dragon who kept the vibe held back and mellow, as the cold began to sit right before Atoms for Peace captains Thom Yorke and Flea did their weird boogie around the stage to keep warm.

See photographer Jenn Hernandez's photos for both days here in our Festival Report.

IO Echo rang in the afternoon, followed by a snotty and sudsy performance by UK's Palma Violets, before Cayucas brought the Central Coast rock vibes [they're actually from Davis] a little closer to the Bay. A stray observation also saw Pier 39's notorious Bushman making a cameo in the crowd.

Lord Huron brought modern day hymns and spirituals to help us sail out to the uncharted waters of “Ends of the Earth”. The Haim sisters lived up to their hype and gave us some of that good old time rock and roll. STRFKR went on promptly at 4:20, wishing all festival goers an apropos “happy 4:20”.

Real Estate brought shining golden guitars that chimed against a San Francisco sunset. Having played a secret gig the night before in the city, they brought enchantment and an luminous light during “It's Real”.

James Blake brought some well thought, well mannered and well manicured keyboard smooth variations as the night chill descended. The temperature was progressively dropping, but Japandroids did not disappoint and definitely kicked out some encouraging energy that overrode the lack of outdoor heating systems. They dropped tales of playing Canada's ski-friendly Fest 'Snow Job' and kept the mood pretty upbeat.

Fighting off hypothermia, we were almost lost. We took solace in the media tent to shield ourselves momentarily from the ice cold breeze that was floating in from all directions. Then after a pit-stop at the Rock Med tent, we rested while listening to Animal Collective next door, parading their recent Centipede Hz-hits. Sleigh Bells woke everyone up before Beck brought his dad-diva kinda steez in a fedora and red scarf get up.

Then during the night's finale, we found our way backstage for our annual roundtable discussions with colleagues, festival organizers and the like. Imbibing the complimentary Heineken Light and Red Bull, we discussed festival lineup loves, the intricacies of planning, the headaches, the highlights, the low-lights, and of course the general complaining about the weather. Then after collecting ourselves, stumbling past the illuminated jellyfish, fumbling and then filing our way into the shuttle, we made our way back over the Bay Bridge to the Civic Center in search of home, hot tea, and a warm couch.