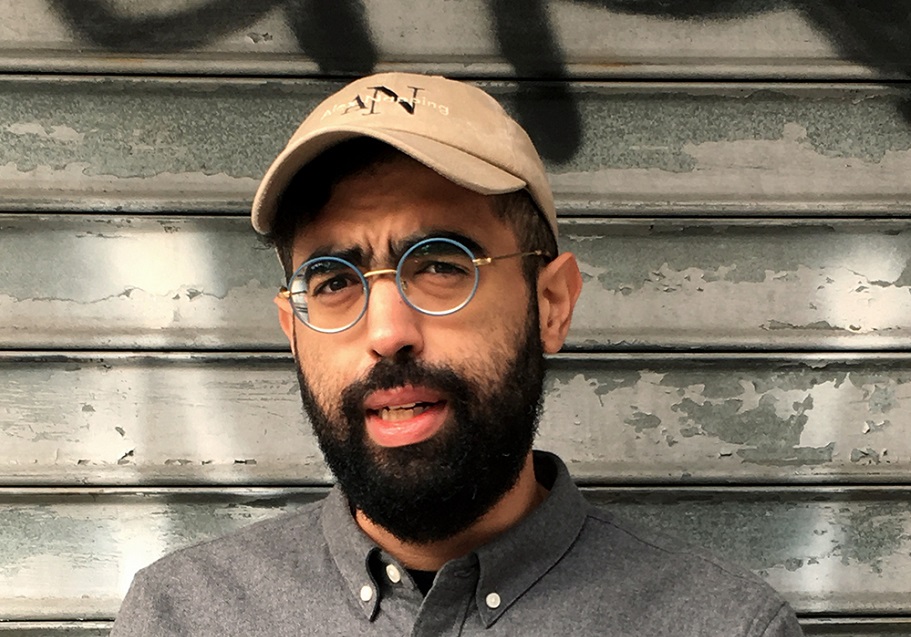 I knew that I wanted to experiment with color and I wanted to juxtapose organic imagery—crystals, flowers, wasp nests, the moon, etc—with Brian Tomerlin’s analog video art and projections, all in a hyper-colorful context. The concrete idea behind the abstract visuals is that “Chromatose” is a form of chromatic mental illness that the band is suffering, and each of these little worlds are their cells at the asylum, and the imagery in between are these chromatic distortions in their minds and symptoms of the illness. These mental distortions intensify as everybody escapes and runs amok in the asylum, until they all witness a vision of this transcendent portal thing that brings the band together. Or maybe they’re all just fucking crazy.

Emerging from beneath covered drapes of plastic, Midnight Opera entreats their audience to enter their colorful asylum of oddness, eerie artistic arrangements where the blending of the strange & wonderful collide like compressed consciousnesses. With the ominous motif of the full moon that stands fixed & omnipresent high above the extents of the atmosphere; Midnight Opera employs articles of atmospherics with ethereal art forms that mixes ghost-like gestures amid shape-shifting set locales that where the physical & metaphysical realms feel almost one in the same. And surely this is no accident, as Myers’ direction makes the physical & immaterial realms feel like parallel dimensions that run the the gamut between high definition visuals to VHS cadences of analog distortions that creates an entire world that belongs to Midnight Opera. As the band exhibits a relentless & fun-loving energy throughout, the Dallas group creates an existence that is dead-set for the silver screen shine of midnight matinée showings. As everything comes to a dramatic conclusion, pay close attention to the powers that the lunar planet holds as it takes effect over the entire band in all kinds of unknown & unreal senses of surprise & shock that will take you between worlds.

Describe how Midnight Opera has shifted styles, sounds & fashions since 2015.
Teddy Georgia Waggy(guitar): When we first started playing shows, we came up with a stage design that’s probably best described as “Funeral Directors Gone Wild”. (Black suits, evil eyes, apologetic floral arrangements everywhere.) We’ve gone through a lot of visual iterations for our live shows—some futuristic, some creepy, some wacky—and every time we hone in on what works for us and what doesn’t. One time we put weeks of work into costumes that ended up looking like giant penis suits. You live, you learn.
Our current visual theme is inspired by a mix of 1940s Hollywood and 1970s London. The fashion is glamorous and glittery, our alter egos are campy and vampy, but there’s a thread of vulnerability underneath it all.
Tell us about how you go about making such mystifying & unusual audio progressions & arrangements.
Paul Alonzo(bass): I think that because our styles and influences are all pretty different, the blend of those creates a sort of manic writing style. Some of our choices are very intentional, but we are also the benefactors of happy accidents.
How do you all brainstorm & session-out your songs? Are there any subscribed approaches or preferred methods employed in this process?
Paul: Some of us start off with more fleshed out and recorded demos. Teddy is best at this. A few songs were written in rehearsal rather quickly, while others have been shelved and brought back later with different working ideas.
I personally like the more interactive sessions because it allows me to curate the sound in real time with the aid of the others.

Tell us about working with Judd Myers, and how the thriller video for “Chromatose” further impacted the song’s own surreal nature.
Nicole Marxen-Myers(keys): Talking with Judd about his ideas and interpretation of the song let it take on a new life for me. I’d had the lyrics lying around for years, and an idea for the character whose perspective I was donning, but after all that time it had started losing its original meaning. The music video has definitely informed how I perform the song live now.
Teddy: “Chromatose” on its own was a song about a person trapped in their own dilettantism, but Judd’s video interpretation of someone trapped in an insane asylum added another layer to the thing. I like the interplay of those two ideas, being confined by an outside force / by your own mental blocks, and how they can each have equal power over you.
Other local Dallas groups/artists & activists you all would like to give a shout out to?
Danielle Georgiou and her dance group are doing really beautiful and challenging work in Dallas right now. She helped us choreograph our live show.
Alex Bhore, our producer, is a killer collaborator. What sounds like hyperbole is just the truth on him. He’s a wonderful friend and always makes you feel better about any musical conundrum you bring to him. He gives great advice and input, but never attaches his ego to it. And most importantly, he has a lot of synths we want to play with.
Sudie and Pearl Earl are two artists we work closely with on various projects, musically and otherwise. Teddy and Sudie have a fashion collaboration in the works as well.
Brian Tomerlin is a rad video artist who works with a lot of experimental musicians in the scene. His projections can be spotted projecting away in the video.
What else can we expect from the forthcoming album?
Teddy: The next album will be filled with songs about creatures, preachers, and sexually harassing grim reapers. There will be a lot of Latin percussion and a little bit of piano. It will be best to listen to it while you are driving through the desert, knocking over a casino, or sitting alone in a hotel bar waiting for a spy to take you home and ravish you.
Listen to more from Midnight Opera via Bandcamp.