Whoopi Goldberg gets high before the Oscars: we have the transcript 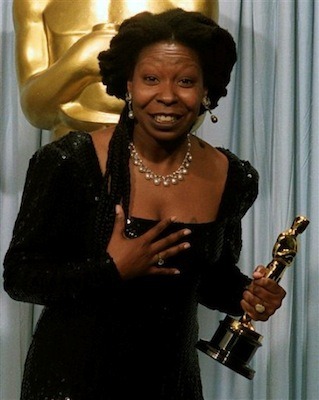 BREAKING: Whoopi Goldberg smokes weed. She even smoked it before receiving an Oscar for her performance in Ghost. She describes her ordeal thusly:

“When he (presenter actor Denzel Washington) said my name, and I popped up, and I thought 'Oh, fuck…okay, up the stairs…around to the podium…there's millions of people, get the statue, pick up the statue.'”

We know this thanks to an audio recording of a voice-over session she did in 1993. But IMPOSE has obtained a transcript of what happened in Whoopi's dressing room moments before this hilarious Hollywood anecdote transpired (thank you left-over J. Edgar Hoover wiretaps!)

WHOOPI: *Closes dressing room door* Goddamn, that Mickey Rourke has some busy hands. Now I can get high in peace. *Produces joint* Mmmmmm-hmmmm.

WHOOPI: *Startled* Patrick! You're a ghost! Just like our–

GHOST SWAYZE: I know, I know.

WHOOPI: But you're not dead, I just saw you a minute ago.

WHOOPI: Why the hell not? We used to get high all the time on set! Remember that key grip who went down on me while you videotaped the–

WHOOPI: And I heard that when making Roadhouse you needed a hit just to fit into those tight ass jeans. All those girls in your trailer, those weird costumes you used to–

GHOST SWAYZE: JESUS WHOOPI! OK I get it, I'm not perfect! Just shut up and hear me out. That joint of sweet, harmless marijuana has grave consequences for us all.

GHOST SWAYZE: Well, for one, in 15 years you're gonna be on a daytime talk show with Barbara Walters.

WHOOPI: Shut the fuck up.

WHOOPI: *stares at joint* Go on…

GHOST SWAYZE: If you smoke that joint, you'll forever alter the course of the careers of so many of us. For instance, Mickey Rourke? That pus-faced troll outside that's been eating all the beenie weenies at the craft services table? He gets nominated for an Oscar in 2009.

MICKEY ROURKE: *Muffled* Aw I knew you were talkin about me Whoop, you know I'm just crazy about you. Just gimme one little hit, please Whoop? Please?

WHOOPI: Are you wearing pants?

WHOOPI: No dice. Leave me alone.

GHOST SWAYZE: Exactly. Just trust me here, for my sake, for yours: don't smoke that joint.

WHOOPI: Okay! Okay! Just stop fucking haunting me and…I dunno, go back into your body over there or whatever.

WHOOPI: You do that.