On The Couch With Cameron Esposito 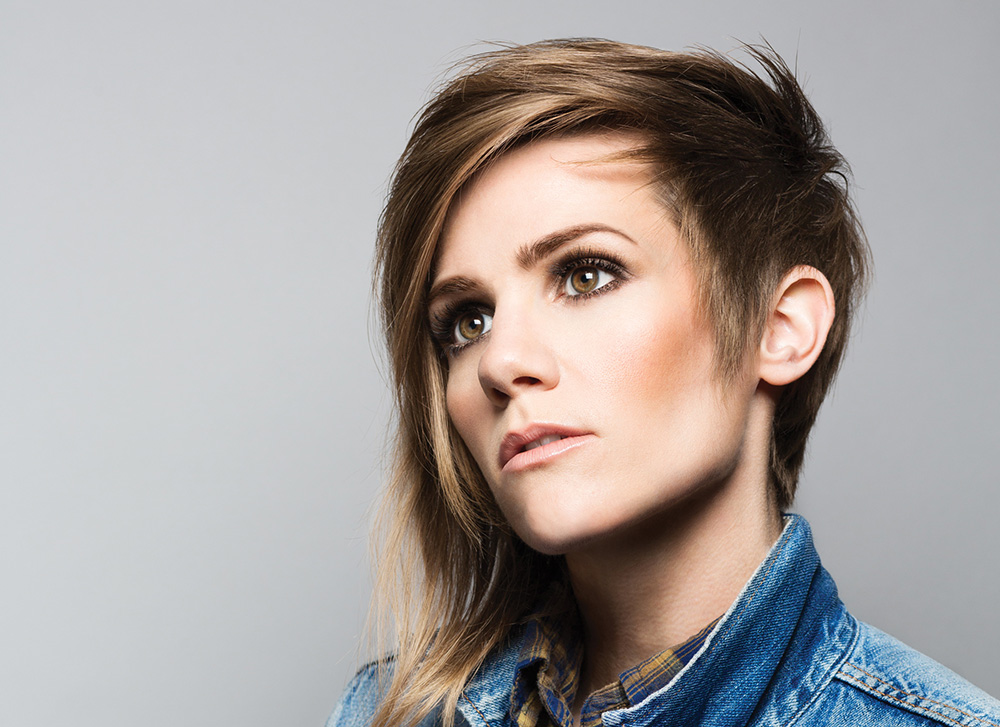 The subject is giddy and seems eager to reveal her innermost thoughts, a trait I seek but rarely find in my patients. Without a hint of irony or sarcasm, the patient navigates difficult topics, such as feeling comfortable with one’s sexuality or opening for a notoriously cruel comic, with an easy openness that is seldom found among comedians. In fact, by the end of our time together, I felt that I had learned more from this subject than she had from my expertly crafted questions. Luckily, Cameron Esposito‘s charming, eloquent answers are available for your examination.

Was it harder to come out as a comedian, or as a gay woman, to your family?

Oh, that’s a great question. I don’t know. Let’s see. I was already out to my folks, and then I started doing stand up, and actually, I was using it as a way of coming out to everybody. I was still in that time frame when I was trying to figure out how I was going to navigate this in my life. I think I look pretty obviously gay, but there’s nothing that indicates to the world that that’s what’s going on with you. It’s such a big issue, every part of your life is that; it’s the least and the most important thing about you. I think the first time I really started talking about being gay in front of large groups of people was on stage, because afterwards, everybody already knew what was going on. You could have normative conversations about life, and I didn’t have to constantly wonder if people knew what I was talking about when I was talking about being in a relationship, things like that.

Do you think you used stand up to work your way through issues you were having?

The coming out process, sure, absolutely, yeah. I mean, I had come out years before, but it still wasn’t something that I felt really comfortable with, so yes, absolutely.

Are there any jokes that you can’t say in front of your parents?

At this point, they know what they’re getting themselves into. My stuff isn’t really dirty or cruel for dirtiness or for cruelty’s sake. It usually has a reason that I’m going there. My parents do occasionally come to shows, and they totally know what is going to happen, and the only thing that’s funny sometimes is that the audience is like, “Uh, she definitely shouldn’t tell that stuff in front of her family.” But that’s okay.

You opened for Anthony Jeselnik on a recent tour. He seems like he’d be an abrasive character to work with. Was that stressful for you?

No, he’s actually great. He’s like the nicest man in the world. I think his style of comedy and my style of comedy is not the same, which actually makes for a good situation because then I didn’t have to worry about being a certain way to make sure that I would be different enough from him. It’s kind of great to work with people that are unlike you, because the audience is fresh each time; like, I haven’t ruined any of his jokes. And he specifically asked me to come; it was his choice. He also really supports women. I know this could be shocking—he really supports women, and he really supports gay folks. He really supports good comics. He’s a fan of comedy. It was really cool to work with him because he was very professional, and also because it was a great challenge because the people that were there to see him were definitely not the kind of people that would usually be there to see me.

Do you think anything from your childhood foretold your career as a stand up comedian?

That’s a good question. I wasn’t the class clown or anything like that, but I’ve always made people laugh. I was very studious, and I was very into sports, I didn’t do plays or anything like that. But when I was a little kid I had cross-eyes. And I had to wear an eye patch for a lot of my childhood—for eight years of my childhood—and I just think that if you feel a little bit off in any way. . . for instance, if you happen to be a little gay kid in the suburbs who also happens to wear an eye patch then you might have to develop a really good sense of humor, otherwise, things are going to be rough. Most comics have developed humor as a coping mechanism, I mean we all use it, but I think a lot of comics, something happens where they just turned it up an extra notch. So if you’re a little pirate kid, you have to just be really funny so that people still think you’re cool.

If you happen to be a little gay kid in the suburbs who also happens to wear an eye patch then you might have to develop a really good sense of humor.

You started doing comedy in Chicago and then recently moved to LA. Was that a stressful move for you?

It was, yeah. I think any time you move as an adult, it’s horrifying, because you have to start from scratch, and I’m kind of at the point in my life right now where my job is really wild, and every day’s an adventure, so I really like to have a stable home situation, so that was definitely challenging. And then also, it’s just a really different type of a city. LA’s a lot like Washington D.C., in that everybody there is there because they are in the same field, and they want to do the same job, and it’s very focused, and it’s also very behind closed doors. I was a little bit more used to the bar culture, and public transit, and walking around, and street festivals that Chicago has; it’s a little bit more like New York. So suddenly when you move to LA, it’s like nobody walks anywhere. We were just like, “Where are the people?” It’s a great city if you want to do this job, because there are so many wonderful people there, that are really driven, and really successful, and really open, and it’s been great. It’s been better than I thought it would be.

How has stand up comedy affected your mental health?

I think just for my personality type, believe it or not, if you met me, I’m very friendly, and I’m very talkative, but I’m really an introvert. I need a lot of time to myself in order to have enough energy to just exist in the world. Sometimes I laugh about the fact that I somehow found a job where I don’t need to get dressed until 8 PM. That’s perfect for me, because I’m up at seven and working all day, but it’s kind of at my own pace, and it really allows me to spend a lot of time resting up my energy. So I think it’s really good for my mental health in that way. I think the downside is that it’s a really lonely job. Your coworkers are other comics, and that’s really amazing because there are so many people that support you and that want you to do great, and that understand where you’re coming from, but also, you don’t ever work in the same place with your coworkers. Kind of by definition, you’d be at different clubs on the weekends, and then maybe you’d be at a festival together, maybe you’d be working on a show together, or at a TV taping, but it’s really a lot of solo time.

Cameron Esposito’s new album, Same Sex Symbol, will be released on October 7, and is available for pre=order now via Kill Rock Stars.