Best of: Forcefield duo pop with keyboards at Pianos 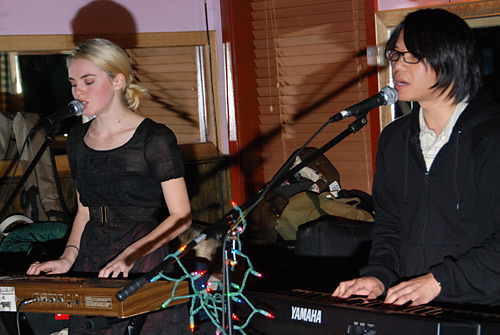 I spent way too long hanging around the Forcefield PR show at Pianos off-and-on yesterday, and it seems that this CMJ, I'm really into into boy/girl two-pieces involving keyboards. (See above.)

Despite the deceptively aggro name, Fight Bite have much more in common with the bleary downtempo pop of Beach House than say, Detroit spaz-punks Child Bite or, uh, drinking too many snakebites and starting a brawl in the pub. Actually, they are probably the exact opposite of barroom brawling. No brawls occurred anywhere near the band when I saw them. The Denton, TX-based duo plays warm, gleaming swirls of keys and echo punctuated only by sputtering drum preset loops and whispers of duet voice. They may be a little preset-heavy in-general (is that the old Casio samba accompaniment?) but spun down and reconstituted with heavy reverb, the results are welcome.

Bell sprang into the collective awareness with a version of “It's Oh So Quiet” on the Stereogum-created remix album of Bjork's Post, and since then Bjork comparisons have been inescapable. It is certainly true that Olga Bell's vocal twists and electronic peculiarities bring to mind the Icelandic musician's work, but Bell seems much more of a solo electronic bedroom producer. Surrounded by pedals, laptop, synth, and weird-keytar-thing, it was clear that Bell had the technical sound manipulation skills to match her voice. Bonus points for the strange syncopated handclap intro to “Echinacea”, which was actually too difficult for the audience to help out out with, and the clarity of the live mix, preserving every word. I am shoehorning her into this article because she plays live with a drummer.

Taking things out of the bedroom and into the garage, LA's Pity Party mussy up their brisk lo-fi pop with jagged guitar bits and ominous keyboard passages (played by the drummer, USAISAMONSTER style).

Tobacco, like Bell, is actually more of a solo electronic producer, but like Bell had a second member along (on the left, actual Tobacco on the right). And slurpy hip-hop synth drool is much more fun when you have space to dance, unlike the Tobacco performance at Cake Shop on Wednesday.

Stars Like Fleas have nothing to do with this article, besides playing at Pianos, but I am becoming very enamored with their recent-ish turn from vaguely improvisational ambient chamber ensemble to precise, intricate orchestral pop outfit. And one which doesn't avoid dissonance or noise, either, despite the occasional syrupy passages. Live, they sounded a little more post-rock than usual, but this may have had mostly to do with the detail-flattening room acoustics.

And Pwrfl Power played, as well.

Ah Pianos, it was a good time.