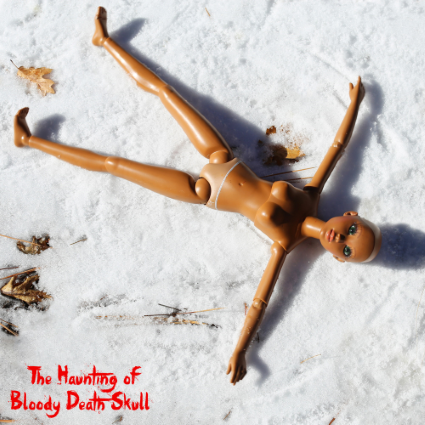 Los Angeles-based Bloody Death Skull – which ranges in size of three to twelve members at any given time, fronted by insane vocalist Daiana Feuer – has been hard at work on their 4-track EP The Haunting of Bloody Death Skull, which is set to release tomorrow. Recorded at Comp-ny Studios in Burbank with engineer Be Hussey, the work was completed in just two days. “John and Bridgette Seasons from the band Haunted Summer have been playing with us whenever they’re in town, and this was the first time we’ve gotten them on a recording,” explained Feuer. “The drummer is Andres Renteria, who plays with Jose Gonzalez, Nick Waterhouse, and Gaslamp Killer, to name a few. Micah Keren Zvi played the juicy bass. And I’m on electric ukulele, my treasured little instrument of destruction.” The Haunting of Bloody Death Skull is our favorite EP thus far this fall, and we’ve got the exclusive premiere of the EP in its entirety, so it’s time to get into the Halloween mood with this stellar band.

“Betsy’s Back” starts with a fun bass line, reminiscent of some of our favorite funk music, and then bleeds into a more 50’s feeling vibe. When the other instrumentals layer in, you can’t help but sway your hips and sing along to the simple, crisp and clear as daylight lyrics which include lines like, “Betsy’s back, oh my gosh / Betsy’s back, she’s bewildered / Betsy’s back, did you see her?” We expected something a little more terrifying from “Psycho”, although the lyrics are delivered at different octaves, allowing the listener to revel in the idea that we might be playing with multiple personalities. Lyrics like, “I know you think I’m psycho momma / I didn’t mean to break your heart… I’m having crazy dreams again momma / So let me tell you about last night / I woke up in Johnny’s room, momma / Standing right there by his bed / With my hands around his throat, momma” lead you through a pretty intense narrative. But who are we to judge?

“Carpool” begins at an upbeat pace, the same vintage 50’s feel to it that we experienced early on with “Betsy’s Back”, singing about a carpool situation, something that is easily relatable. And then “Gloom” rounds the EP out, with a slow, murky, and dark disposition. It fades out at a steady pace, and we’re left ready for the witching season.

Feuer had quite a bit to say about the EP.

In honor of Halloween, my favorite holiday (which BDS celebrates pretty much year-round), I decided to pick out four songs that deal with being “haunted” in different ways. “Carpool” is about coming to grips with a break-up because you can no longer drive in the carpool lane, even though his ghost remains. It’s actually the first song I ever wrote. It came to me as I sat in freeway traffic, and it felt like a perfect metaphor. “Betsy’s Back” takes a fun, bloody approach to the lineage of “My Boyfriend’s Back.” Betsy returns from the grave with a cleaver seeking revenge. “Gloom” was written after my best friend’s wife made us break up. I know that sounds a little funny but it was terrible. I sat on my porch strumming the saddest, doom-filled chords, D-minor and G-minor, looking at my neighborhood, imagining that we were all just staring out our windows feeling sorry for ourselves, and it made me laugh, maybe so as not to cry… Finally, “Psycho” is a great murder ballad by Leon Payne from the 1960s. It’s incredibly fun to sing that song and embody that character, someone who accidentally hugs puppies to death. I love spooky, campy things, and that song makes me feel like the star of a John Waters movie.

All in all, beyond fulfilling the theme of “haunted,” I think these songs offer a nice full-flavored taste of what Bloody Death Skull is about; it’s like horror at the sock hop and we’re the house band.