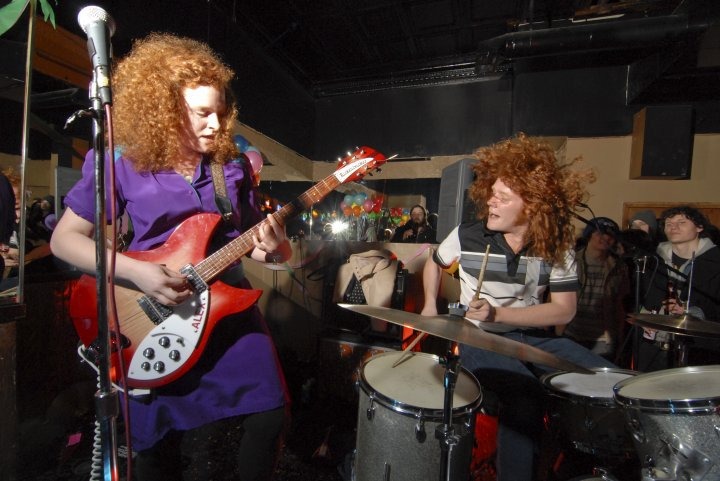 Last week, when gushing over “the beautiful Chicago sound,” I made mention of liking anything Alex White is involved in. Every time I listen to a record that features her in the lead singer spot, I think to myself something ridiculous like: “that girl has a voice like a tornado kicking the shit out of a 4-alarm fire.” She wails on her guitar and shouts like a woman possessed.

What she's involved with now is quite possibly my favorite of all her projects: the two piece band with her brother Francis, White Mystery. The duo will be playing Nick Gazin's normally out of control Midnight Till Death party this Friday, and again at Cake Shop on Saturday.

I sent Alex some questions via e-mail.

What the heck happened to Missile X Records?

Subsequently, I put out the only single by The Dirges, then an eBay classic seven-inch masterpiece by The Spits called “Spend the Night in a Haunted House with the Spits”, on green vinyl. Each record came out with a custom lollipop that said, “Happy Halloween, SUCKERS! Missile X and the Spits.” Then the rest of my life took over, like touring with Miss Alex White & the Red Orchestra on In the Red Records, studying business at DePaul University, and partying hard.

Now I play with my brother Francis in White Mystery. We're lifelong creative partners. Self-releasing the new White Mystery record seemed like the only logical thing for a musician who enjoys the creative process from start to finish. White Mystery makes its own tee shirts, hand assembles CDs, designs graphics, makes DNA buttons with its hair and blood, books shows, that kind of thing.

So is the Red Orchestra done?

So if White Mystery is you and your brother, Francis. What exactly is the mystery?

There's a candy flavor called “White Mystery OUT OF CONTROL.” Our last name is White, and we're very sweet, so it seemed appropriate at the time.

Look at my projects names lined up in one place, you'll notice reoccurring syllables, themes, and words. Can you find them? There are seven.

I've always liked that you aren't afraid to start new projects with different musicians. Which do you prefer: a more “traditional” band (drums, guitar, bass, etc.) or the two piece set up?

Yea, my musical spectrum spans from a two-girl-piece called the Red Lights in high school, two guitars in Hot Machines, and the Red Orchestra that complete with the traditional setup PLUS a horn section.

Which do I prefer? Definitely the two-piece setup at present. It's fast, mobile, tight. We'll fly wherever and just borrow equipment.

The White Mystery is playing the Taste of Chicago this year. Is this the big time?

Yes, it is, right? It'll be cool to play on the lakefront for the masses, for free, in the town I love. The White Mystery song “Take a Walk” is about Chicago.

I love turkey legs, rainbow cones, and Buddy Guy. Are you gonna come?

Any chance to see Buddy Guy.

Vitesse X – “In The Balance”