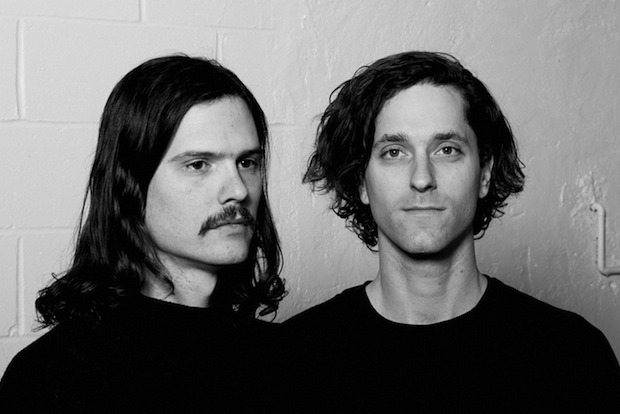 From the Dull Tools/Parquet Courts camp who just gave us Beth Israel's Dental Denial — introduce yourself to the electronic appetites of the duo, Eaters. The synth and drum machine consuming twosome are made up of the versatile talents of Bob Jones and producer Jonathan Schenke who are releasing their self-titled with a release party at Glasslands on April 17, and a subsequent Midwest tour on the road to Moogfest, happening April 24 in Asheville, NC.

On “Bury the Lines”, promises kept become buried in the electro deluge of decayed dirt, earth, and severed ties. Drum machines skip through the broken red ribbons of pledges past, with Bob's cold and deadpan goth delivery, that runs up against the no-wave dimensions of Jonathan's mixing. Eaters devour the brooding affectations and disaffected styles that some attempt to distill and market like reprints of old Bauhaus t-shirts, and engulf the inferno of the interior that binds the artists and the audience together in the same angst-pit of snakes. Somewhere in the siren of synths, the life cables and chords of yesterday and tomorrow are cut and trumped to a tune that reminds us all to live for today.

Eaters' self-titled will be available April 15 from Dull Tools on vinyl, and digital via Driftless Recordings.

Catch them touring on the following upcoming dates: