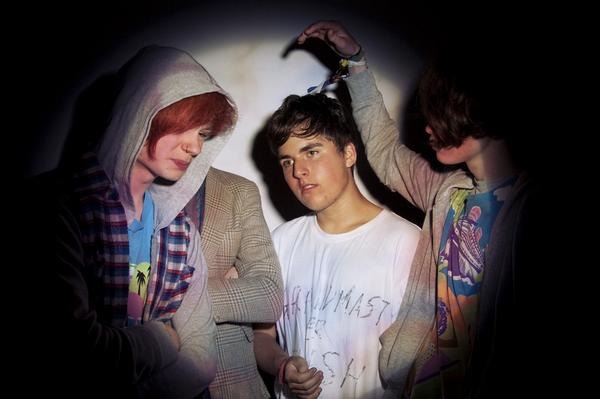 Maybe somewhere along the Red Sea there is a rapper going by the name of Amun-Ra hitting out some Jay-Z classics. Or maybe not. There is however a different type of Egyptian Hip Hop hailing from the dusty streets of Manchester. They mix thudding drums, tight guitar work, strong vocals and the best synth riff you could imagine on “Rad Pitt“. Which makes for a pretty good band formula if not a dream holiday in Sharm El Sheikh.

There’s the idea flying about that EHH are pretty hard to pin down- genre defying and interview question-dodging. People are freaking out trying to crow bar the band into a niche. Everyone is seemingly very confused that they are neither from Egypt nor play hip-hop. We say to this: Chill out. Take a leaf from their book and just go with it- take deep breaths and we promise everything will be okay.

Does location matter to you? Do you feel rooted as a ‘Manchester’ band?

AH: I guess in the way we are from Manchester but then what is a ‘Manchester’ band?

LSM: There are a few really good bands from round here that we know and hang out with

Are you fed up with people saying you’re a young band?

ND: Yeah we get that all the time. I think every review we’ve read mentions our age.

AH: I guess it’s because we’re seventeen and everyone else is 22. So we’ve got like five years on them. It’s not annoying that it’s mentioned because it’s pretty true- we are exceptionally young to be doing this. I can’t think of any other seventeen year old bands that are headlining their own tour.

Where do you think you’ll be in that fives year time then?

ND: Dead or in prison by then.

AH: We aspire to be like the Courteeners but then that might be too big a dream. [They laugh.]

It’s pretty hard to gauge tone in text though- if that goes in it might spread that you actually like the Courteeners and aren’t just being ironic!

AH: That’d be funny though because in other interviews we say how much we dislike them. It might look like we’re just taking the piss out of you- rather than the fact we’re all in on the joke.

AH: Yeah… so they are shit, just to clarify.

LSM: Shall I tell you a story I read in the paper the other day? A girl with no vagina was having oral sex with a guy and then her husband walked in, he stabbed her and then she got pregnant because the sperm swam down her body. True fact. It was all about freak coincidence and perfect timing. I mean how do you get pregnant without a vagina?

ND: Yeah, but she still has a womb. Right?

AH: Anyway, that’s disgusting. Five years from now we’ll either be still together, not be together or doing our fifth album. Or I’ll be starting a side-project called Fightstar and Nick can have Son of Dork.

What do you reckon to all the press you seem to be getting? Had any bad reviews yet?

AH: It’s all been pretty positive so far. Someone did a weird review which said we were okay but half of it didn’t even talk about us and ended with saying that they liked some other band more because they’ve listened to them more at the moment… Pretty stupid. And then there’s always going to be people on blogs who are all, “Man, these kids suck- they’re actually ugly too.”

ND: Some guy at a gig didn’t realize Alex was in the band and started slagging us off to him

AH: We get more good press than bad though.

Do you Google yourselves?

AH: We get an alert every time someone posts something about us online. We do get a lot of stuff about Cairo coming up as well though

AH: And some of it is just people on Facebook going, “Hey, I’m Egyptian, my favorite music is hip-hop.”

Have you got plans for an album?

AH: We’ve not really started writing stuff yet. We really want to make the songs not just good but amazing. We have enough material for an album but we want to rework everything to death. We can write a song in a day and we don’t really work where something evolves over months and months because we get bored of stuff really quickly.

Do you think you’ve become part of a “scene”?

AH: I think loosely we’re in one in that bands from Manchester play with each other and stuff. There’s definitely something going on in London as well who we’ve got things in common with like Danimal and Is Tropical. We don’t sound the same but we all think in the same way. People are getting bored with the same rubbish bands

Are you taking style tips from anyone at the moment?

AH: We just wear what we want. It’s not like we ring each other up and co-ordinate outfits. Our drummer likes wearing a mask though.

ND: [Playing around with a piece of paper] I’ve just made an origami piano- do you like it? A guy from Malaysia taught me how to in high school.

What have you based your new single on?

AH: It’s not really based on anything… It’s pretty much paying homage to the Talking Heads