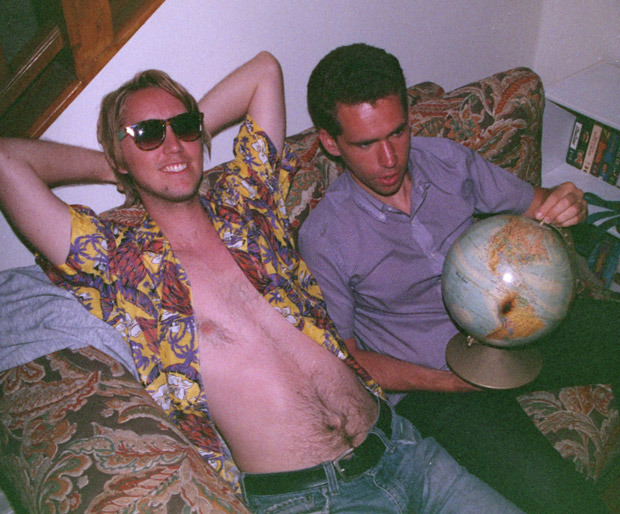 Fergus & Geronimo are returning to the album-releasing world after a medium-length hiatus on August 7 with a new LP for Hardly Art called Funky Was the State of Affairs. To celebrate, we give you this new album teaser, a lovely video clipshow with songs for the records and lots of crazy footage, including some fairly PG bare butts which might make an old person drop a monocle out of their eye with a gasp (just warning you). Anyways, we had a moment to ask bandleaders Andrew Savage and Jason Kelly some quick questions about the record, addressing varied subjects including one of the record's main themes – clones, whether Texas is a better place to write songs than New York, and whether or not you have to make stuff different for different's sake.

Funky Was the State of Affairs Album Teaser from Hardly Art on Vimeo.

Andrew Savage: Nobody's gotta prove anything to me. For all I know I could be one.

Re: Jason's move to back to Texas and then back to NYC: which do you think prompts more thoughts and inspirations in the realm of otherwordliness and weird ideas? On one hand, there is the architecture of the city to consider, but on the other hand, it might be easier to feel weird and out of place in a smaller town.

Jason Kelly: After selling his earth “possessions” and bouncing around different continents he made his way back to NYC, like a sling shot. Our home spot in Texas was part of a three city trifecta known as DFW (Dallas Fort Worth). DFW is heavily populated by earthlings. In fact, DFW is the 4th largest metropolitan area in the great America. So we still have no idea what it is like to create in a small town, honestly. That being said, New York was just the place we needed to be to create these songs, videos, art and dancing nights.

Andrew Savage: I've never left New York. But he also lived in France for a little bit so maybe he could tell you a thing or two about Francoconsciousness. I think both places are pretty similar in that they are both so heavily steeped in their own lore. Texas summons images of vastness and isolation, and most people think we are from some small town in the desert where you can see for miles. Nope, we are from a college town, and like many college towns (bleak as they can be) there is a connection to the world as a whole. There is worldliness, for sure. I honestly felt too in place there. I feel more out of my element in New York, which is good. Honestly, I don't really credit moving with a significant artistic shift, musically anyway. People always want to identify Fergus & Geronimo as being from or of somewhere, but we are a planet earth band. We could do this anywhere on the globe.

Jason Kelly: We haven't moved on or up or over. We had to get a fresh vinyl canvas because the last one was full. Music as a whole (foods) is too diverse for one big generalization but ZzZZzzZz………….

Andrew Savage: I definitely don't think it needs to happen to music as a whole. The word experimental, when applied to music or any type of art for that matter, is pretty loaded. I'm not even sure if I would say that “Funky…” is necessarily an experimental record. We wear our influences on our sleeve, that's for sure, and we listen to a lot of stuff that spans the avant-to-pop spectrum. In other words, I think we just make music we like. Experimental implies that we are consciously trying to go against the grain and make a statement. For the most part, this record came pretty naturally, with the emphasis being on making good songs. We are making a statement, but I don't think the statement is being “experimental”. I think a lot of experimental music is pretty shitty when done for its own sake. It's important when creating art to be conscious of what you are doing in the context of the rest of your output. We thought a lot about the last record when making this one, and neither of us wanted to make the same kind of record as Unlearn. Our main thing is that we like making albums, something that is enjoyable from start to finish. Maybe something that isn't fully digestible on first listen, but ultimately becomes something that a fan can identify with and cherish. To make the listener feel less lonely in the pop music hellscape.