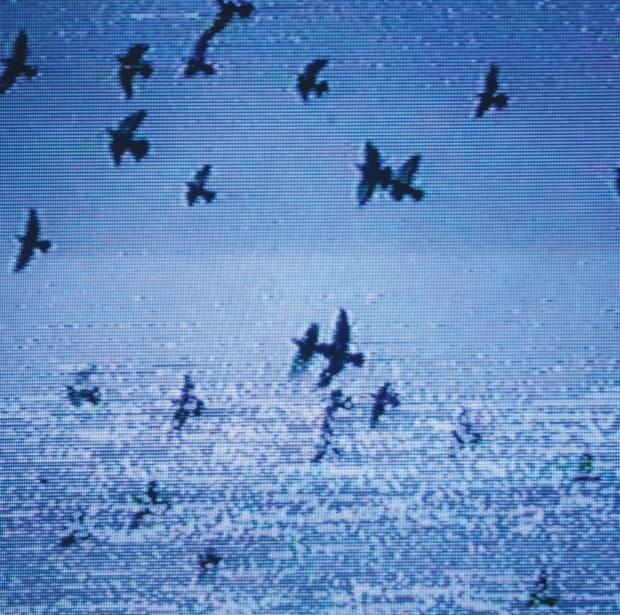 Channeling 80’s synth-pop obsessions with his love for layering loops and samples, epic45's Robert Glover premieres his new solo track “Everyone” under the moniker Field Harmonics. Dropping hints that a new epic45 album is percolating in the works, the Field Harmonics project traverses personal and worldly territories with recordings collected and inspired from the vast fields of earth to the found sounds of home. Preparing to release the first album Walls July 1 on his imprint, Wayside and Woodland Recordings, Glover presents new audio collections woven from the electro fibers of the past for anyone who has fallen out of love with the guitar but rather has fallen in love with the world.

Gathering the electronic impulses that has inspired much of Robert's work with epic45, the Midlands, UK artist turns back time to highlight expressions of the sentimental interior through the clever cuts of keys and interlayed vocals. With a classic Casio touch, the edited dashing of tones dart back and forth between the audio channels that virtually release serotonin into the listener's central nervous system. The sum of this musical bliss can be found in the moments when Glover brings all the sounds and stems together in one cell where the full might of Field Harmonics can be experienced. While the track's construction soars amongst the headiest and high flying indie electro out there, Robert's lyrics remain rooted in the worldly cycles of goings, leavings, departures, and discoveries. '”Walk through, your life, can't see the way, your words, my mind, your head, can't stay”, encompassing the ineffable and uncapturable gestalt in the second verse that ends with, “can't say, can't stay”. A song that originally began as a remix for Xenia Randle turns into a synth ballad of reconciling the irreconcilable through the composition of upbeat euphoria. Stay tuned for our conversation with Mr. Glover after this first listen to “Everyone”.

Robert Glover took us on a field trip behind the development of his Field Harmonics solo project.

Tell us about the track “Everyone” by Field Harmonics.

“Everyone' started out life as a remix for my good friend Xenia Randle, of Bristol-based Cat Green Bike. We had worked together on a number occasions over the years, and I was keen to work on a new remix for her under my newly formed Field Harmonics project. I always love working on a new track using a vocal line as the starting point and then building a whole new song around it, and this was an approach we had used successfully in the past when collaborating. On this occasion, I ended up taking pretty random chunks of a vocal line she had sent me and started dropping these phrases into rhythmic cutup loops I had been playing with at that time. To my amazement these two elements seemed to sit well next to each other almost straight away, despite in no way trying to beat match the BPM of her vocal line to the tempo of the loops I was working on. The track came together quickly over the course of an afternoon, with me programming a simple arrangement and layering synth lines and melodies. I’d been inspired around that time by listening to Grimes and her use of twisting, almost wordless, ethereal vocals (of course something that ultimately comes from Liz Fraser of Cocteau Twins) and was keen to achieve a similar result using Xenia’s words. After a day or two I sent the remix idea to Xenia, and it soon dawned on us both that it felt like a new track in its own right – more than just a remix. This led me to pull apart the arrangement once more and add my own vocals to the song. It was the last song to be completed for the album, as for a while I wasn’t sure if it would fit next to the other songs. After much thought, it then seemed like the perfect song to end the album on, with its upbeat nature and euphoric ending, despite containing some pretty heavyhearted lyrics relating to events and shifts in my personal life over the previous few years.”

How does Field Harmonics differ for you from epic45 and how did it start?

“Field Harmonics originally came about in Spring of 2012, during a time when we had decided to put our main band, epic45, on hold for a year. Ben from the band had recently completed his second My Autumn Empire solo album, and live members Eric and Mike were also hard at work on their respective projects. I had been working on an ambient album before this, but the project has stagnated for me and I wasn’t finding it very satisfying, especially set against what my peers were working on at that moment. I had also fallen out of love with playing the guitar around this time, but had rediscovered my love of layering loops in a simple step sequencer that I had started using when I was a teenager. In a short space of time I had written a number of tracks using soft synths, drum samples and voice, which had also allowed me also to channel my obsession with the 80’s synth-pop of my childhood. To me it had its own place and identity, and it had also allowed me to gain a lot more confidence with my own voice, which was projected and pushed to the front, more so than I had ever allowed in the past. I know there is the argument that you should question your motives for concentrating on side projects when all energies should surely be focused towards your main project, but last year was productive for all members of epic45 in exploring our own different territories. That said, the lure of working on a new album between the four of us seems more exciting than ever at the moment. epic45 has been going for the last sixteen years – so it’s nice to take a break sometimes, work on other projects and then get excited about returning to that main focus again – with a renewed perspective, approach and ideas.”