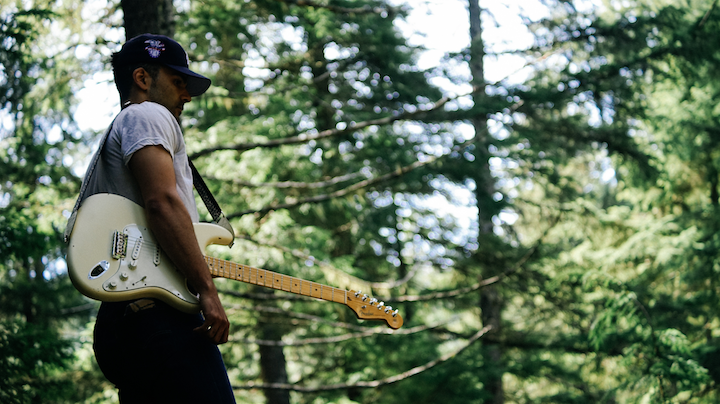 For Jonathan Holt, known otherwise as Leo, his world is that of a Jackson Pollock painting– complicated, full of complex innerworkings, and somehow, cohesive. A multi-instrumentalist songwriter based in Portland, Oregon, (and originally from suburban Michigan) Leo’s musical remnants have taken twenty years to fully connect with each other. Finding influences in a range of artists, from the Beatles to J Dilla, Leo’s ability to write fluently for various instrumentation leaves listeners with a taste of a new universe, a glimpse of Leo’s splattered paint canvas.

Leo’s latest gem, “Alright In Chandrila” pulls heavy from his funk-driven tendencies. With hints of Toro Y Moi and Tame Impala level groove, the track lets Leo’s hollow vocals shine through, pulling us in and out of echos and coos. Booming bass begins the twangy tune, accompanying Leo’s ethereal lyrics, interspersed with an exotic guitar line. “Alright In Chandrila” feels melancholic, yet shimmery with hope– three and a half minutes of underlying juxtapositions.

Leo had quite a bit to say about the track itself as well.

So, “Chandrila” is an interesting song. It’s not a recording that came together effortlessly, or dropped fully formed into my mind. It was actually 2 songs, the guitar riff and the chord progression were supposed to be separate seedlings but I’ve learned it’s always a good idea to at least try things together one time, even if they seem disparate or fundamentally incompatible. I struggled a long while to try and reach balance between the two, and I believe I did an OK job in the end.

Every song I write, I write it such that it occupies a particular place. Whenever I listen to a song, I always feel like I’m able to envision the place that it’s been bound to. For “Chandrila”, the feel I wanted was “butterflies-in-your stomach-melancholy”, that sense of nervous hope and (hopefully) subdued dread before a turning point that could send you soaring into the stars or tumbling down into the depths. The space it lives in is filled with all shades of purples and blues, it has a night time late-dusk feel to it.

Trying to infuse a sense of sci-fi and fantasy has become one of my favorite things to do with music. Lines like “[it’s been] Three long millennia since I felt so on” and the fact that the song is titled “Alright in Chandrila” (capital of the New Republic in the Star Wars universe) are my nods to that sense of otherworldliness. The speaker wanders the dusk lit streets, chambers, and secret places of Chandrila, envisioned as a sleek and minimal city filled with stereotypically white-washed 70s retro-futuristic architecture, longing for a lost lover he/she may or may not ever find. During the chorus, and while he/she searches, the speaker sings words of nostalgic optimism to his love or to himself, or both: “all those truths, we never got to see… let them be”. It all seems very dreamy to me, and the more a song can render me into that dreamlike state, the more I love it.

“Alright in Chandrila”, like most of my music these days, is a melodic journey into the heart of a sci-fi fueled jam. We end it all with the sounds of the night highway, a key theme of my youth, and some words of hippie wisdom from someone who’s gone a little too far out.

Hear more from Leo on his Soundcloud.