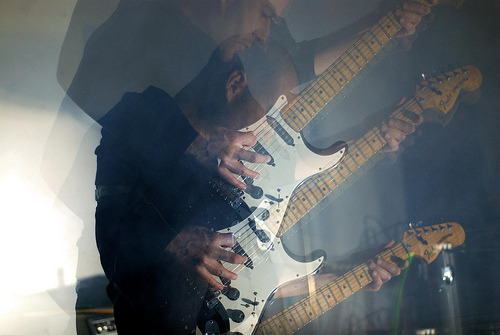 First, feedback. Thick heavy chords of it, twisting and rippling, throwing off gouts of flame with an intense and startling definition, contortions of digital abrasion, harshly and unflinching rendered. Then, almost immediately, the piercing clarity of tandem flutes. Cool, graceful notes, untouched by the writhing atonalities they dance between, arcing, fluttering, spiraling in perfect balance and coordination. Finally, percussion. Flutes hang back and a drum resounds into the mix, tumbling, thudding, resonating through scree of noise. All three elements rear up together and intertwine in orchestrated chaos, then die away.

So begins “Mansion”, the 11-minute opening track of Mario Diaz de Leon's exquisite, arresting Enter Houses Of, which came out of Tzadik in the fall. The track is an extraordinarily visceral experience, a statement of all the tonal and atonal possibilities of sound that still go untapped by the majority of other modern composers. Diaz de Leon's work, in contrast, is bracing and invigorating, a study in harsh beauty that broadens the horizons of classical composition.

“Mansion” has further insights to offer before it is over: clattering metallic percussion — which could be sheet metal, or chimes, or both at once — takes up a complimentary dissonance to the feedback, an insistent beep forms a subtle rhythmic counterpoint, flutes are granted greater space to develop against minimalist backdrops. We've got that entire tour-de-force available for download right here:

The rest of the album develops these themes further, expanding the palette with clarinet, strings both soothing and riotous, and even digital error, with otherwise organic sounds fragmented and skipped to disconcerting effect. It is an excellent tool when used well, but rarely appears outside of certain choppier tendencies in electronic music. Here, the technique sees its richest use in the culminating “Gated Eclipse”, a pooling of all the album's creative wellsprings in some previously unexplored chasm, deep and dark with otherworldly beauty. Strings drone and disintegrate and reform, piano chords plunge away and surface unexpectedly, and static washes surge and crest in gorgeous waves, all mixed with a sense of pristine space that reveals every detail even in the work's most cacophonous emotional peaks.