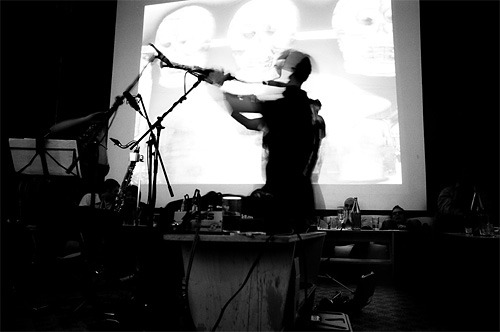 Clarinetist and master sound magician Jeremiah Cymerman (pronounced “simmer-man”) has a way of gracefully stepping outside the confines of established methods. The extended technique he brings to his live clarinet work—gasps, squeals, and shivers of arcane melody dodge fluidly in and out of all of his projects—already places him soundly amid New York's forward-thinking jazz vanguard, but Cymerman often takes his work even further by supplementing his skills with production talents and electronic augmentation. Live, he may play over musique concrete backing tapes, or pedal his clarinet-borne breath into a wash of static; his recordings may lurch and disolve under a flurry of precise micro-edits.

His current project, an exclusive live excerpt of which we are able to offer here, sees Cymerman opperating more as a composer and engineer, directing a disorienting swirl of strings, noise, and fragmented voice. To me, it sounds like a lost scene from The Shining complete with thuds of an ominously-bounced rubber ball and Penderecki-esque whispers.

This is an excerpt from the second section of a new composition entitled “Under a Blue Grey Sky”. The piece, which was composed in 2009, is based loosely on a series of nightmares that I had between 2001 and 2005. Rather than discuss particular details of those dreams (trust me, you do not want to know what was going on in those dreams!) I’ll try to give some idea of the working method:

Scored for string trio + contrabass & electronics the piece deals with striking a balance between the role of conductor and of mix engineer. I’ve never been able to conceive of music without also conceiving of the sonic space in which it exists and to me the sound of a piece tells just as much of a story as the composition itself.

While the excerpt that is being presented here is incredibly frenetic and high energy, the overall composition is much more lyrical and somber than much of my previous work and really aims to create a unique sound environment. Themes of hope and darkness/despair are present and recurring throughout the piece. Similar to the way that I made “In Memory of the Labyrinth System” (Tzadik Records TZ8049) when this piece is recorded for release (to be released on Porter Records in early 2010) there is going to be a tremendous amount of editing and post production. My basic philosophy with that approach is that if at least one person doesn’t get nauseous and puke while listening then I haven’t done my job.

Jeremiah Cymerman, Conjoined Limb Of Superior And Posterior Canals (from In Memory Of The Labyrinth System)