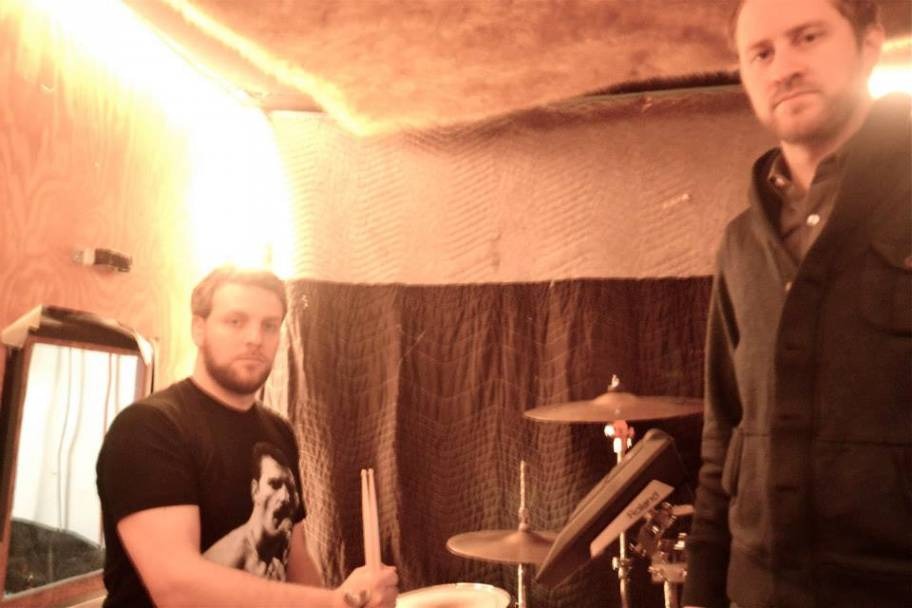 NØMADS bassist Nathan Lithgow and percussionist Garth Macaleavey understand the power of what two can do. With the raw bass and drum duality, Nathan brings his work from My Brightest Diamond, Gabriel & the Hounds with Garth's sound engineer work for Joe's Pub, Le Poisson Rouge and the Philip Glass Ensemble together in one primal package. Old friends and performers from Inlets, the wandering tribe of these two NØMADS proudly premiere the title track, “Free My Animal” off their upcoming April release for Mecca Lecca. The result of a 'happy accident' tracked on Protools during a random recording session in a Bushwick rehearsal space became the bestial foundation of salvageable scuzz that has come to define this two-piece sect. Following the debut, Nathan gives us the full, inside-the-practice-studio breakdown.

Those already familiar with their recent single, “In the Mend” know what kind of damage these NØMADS can exact and inflict with bass guitar and a drum kit alone. “Free My Animal” has Nathan's bass fuzzed up and on the prowl with heartbeat and paw steps patterned by Gath's penchant for prog percussion time signatures. With an addition of a siren horn sample, the nomadic duo entertains their primordial instincts and takes to the NYC kennels, animal shelters and Brooklyn Zoo to free their captive alternate species counterparts. The dynamic between Lithgow and Macaleavey works in the way in a way where every progression and note bounces back and forth in a dialogue of improvised chapters and an urban jungle built out of minimalist chords and notes. The harshed rhythm and blues foundation becomes a safari of noise, where a wild amazon of orchestrated animal like distortion underlines NØMADS' chant of, “set it free, set it free…”

Nathan Lithgow of NØMADS discusses the joy of what rehearsal recordings can bring, the wandering criss-crossed paths between him and Gath, animal and human dichotomies, and more creative insights.

Tell us about the Brooklyn rehearsal space beginnings for NØMADS.

We started constructing and incubating this material in January and February of last year, after playing together in a few different lineups with some of the songs on the record that I wrote in about 2009. From the beginning, we took the approach of keeping everything in the room until it was ready to execute seamlessly. We didn't want to try to make early demos, or wait out on studio time, we just wanted to make sure we could slam all of the material in a live setting. The two of us practiced once a week for a few months, really trying hard to make choices in our playing that made sense in the greater conversation of the songs within that room.

How do you feel you and Garth take your duo approach to make a sound much larger than your two persons through these central ideas of one-take, one-shot, run throughs, and respective pools of talent and musical traits?

The way “Free my Animal” came about as a recording is a little bit of a happy accident. There was a Tuesday in July where we got bounced from our space for the day because of a conflicting rehearsal with Garth's roommate's band, and therefore switched venues to play at Thinning the Herd's [Garth's other band] space in Bushwick. That space had a Protools setup, so we ended up tracking the rehearsal. We hadn't played for about three weeks, so everything had a feeling of muscle memory to it. Ultimately, we played every song without stopping, without a click track, and without really realizing it in a real-time way captured some really organic, deliberate performances. When we listened to the session a week later we knew that those performances were going to be a foundation off of which to build our record.

How have both of your combined experiences and former work together in Inlets inform the synergistic core of, NØMADS?

Garth and I have been very close since we met through our mutual friend Max Tucker, who was essentially our original drummer when we started playing the songs “Down in Out”, “Disguises”, and “Lemming together”. Inlets is an entirely different style and inflection of music, but playing and touring together always bonds people, in both a musical and personal way. We've both played in many different projects, but I like to think all of those experiences in playing music – whether it be other people's music, your own, whatever – informs the way we work together as a duo. Ultimately, this duo works because we respect each other as friends first and foremost, and know how to foster ideas in one another in a way that is easy and, above all, not forced.

Like the primal force of, “Free My Animal”, isn't this the center of the NØMADS wandering dichotomy of human and this animal instinct that is translated between what the two of you create?

I think on this album, we are a band about juxtaposition. We're trying to make a hard, abrasive, distorted sound that still holds melody and lightness somewhere; the lyrical material of the album is about an animal within the person, and about the nature within an urban landscape; it's about the mirror of fear versus belief; being hunted versus hunter. I guess we are trying to go for something 'primal,' in a way, and I do hope that comes across in the way we recorded the material.

What advise can you share on the importance of the most perfect rehearsal sesh or shred fest with fellow musically inclined friends?

Rehearsing music can be totally and mind-bendingly frustrating sometimes. Sometimes, you come in just feeling like shit about yourself, and it feels like there's a weight on your hands and on your brain. The best rehearsals happen when you're happy. Playing in a two piece is a different sensation, though, especially being just bass and drums. When you're playing completely together and in sync, you can really feel that.

NØMADS' Free My Animal will be available April 8 from Mecca Lecca Recording Co.