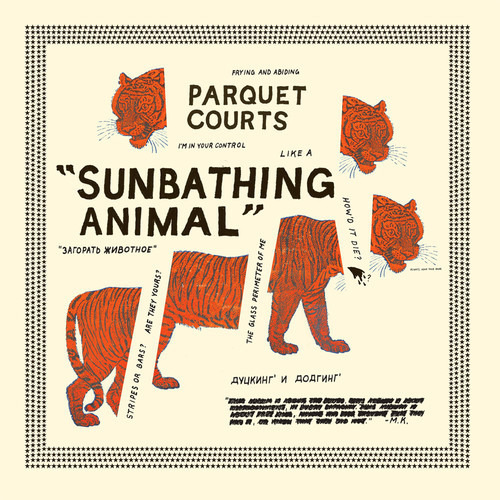 In order to discuss Parquet Courts recent single, “Instant Disassembly”, I have to break a rule I set for myself purely based on etiquette: never mention (or worse gloat) how far in advance you recieve a record. I like to think there are manners, many of which are unwritten and untaught in those silver spoon journo schools, to this racket and not waving your privilege like grade schooler with a new toy is one of them.

So, I've had Parquet Courts' Sunbathing Animal since April.

The first listen came on a road trip to Mecca, CA with Al Lover to attend Desert Daze. I can't help but think the record, particularly “Instant Disassembly”, was meant for weary road warriors, nursing last night's self-inflicted wounds in the shotgun with naps on pillows made from bunched up sweatshirts, roadside In-N-Out stops, gas station Gatorades or 22 oz water bottles, free refills of coffee, holding back vomit from the stench of rest stops, sparse conversation, and scrolling mileage meters. That first listen was disruptive—Sunbathing Animal has since sunk in to better favor—for reasons I continue to kick around in my subconscious to this day. Al broke two hours of silence inquiring if it was the new Parquet Courts, to which I shrugged. As inquisitive as that session was, “Instant Disassembly” burrowed into my skull, beginning a month-long obsession I cannot shake.

Andrew Savage takes the lead, pining to a mamacita over missteps and seeking forgiveness for trespasses. It brings to mind the portion of On The Road when Sal Paradise becomes a field worker and slips into an affair with the “cutest little Mexican girl”, only to realize he's not cut out for hard labor and uses his earnings for a bus ticket back to New York. Savage begins each prepared defense by calling to his mamacita, but fully aware of his skin color, he reconciles his tone as the “drunkest tense” and shovels the last bit of dirt with “kept repeating, kept repeating myself / in my native tongue / the parlance of the problem itself.” “Instant Disassembly” is Savage with one foot out the door, while the other is on a knee, seeking mercy.

Sunbathing Animal feels written from the road, which is quite possible considering the heavy touring schedule of Parquet Courts since the release of Light Up Gold. That said, it also feels written for the road; at seven minutes length, “Instant Disassembly” sprawls like the listless escape of a 12-hour drive. For Savage, it's not working out with his mamacita, he's already gone, but there's a guilt that comes with being romanced by the road after a fleeting affair. Many have explored it before and Parquet Courts have written a fine contribution to the canon of Americana road stories.

Parquet Courts' Sunbathing Animal is out June 3 on What's Your Rupture?.