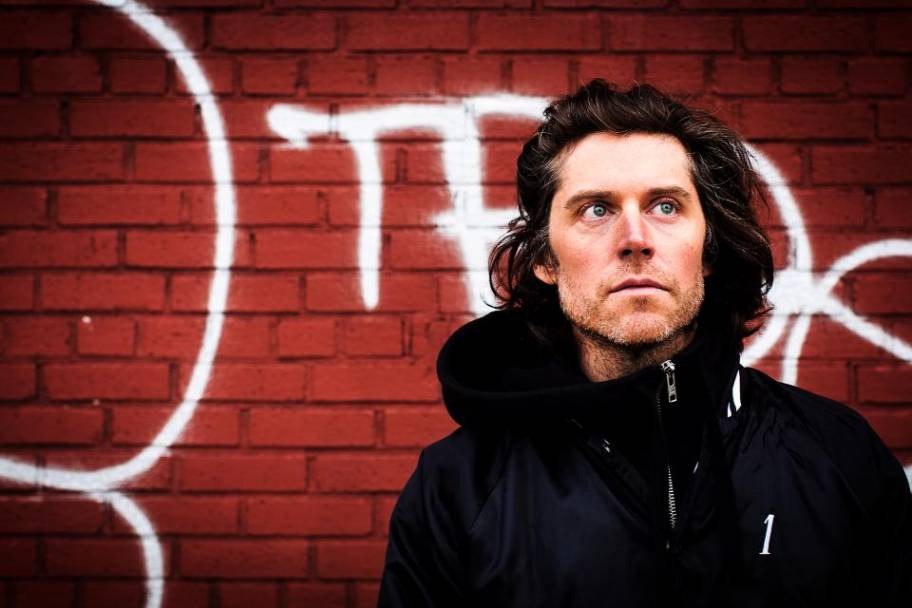 Omaha, Nebraska's Ian McElroy is known for his work in the band Desaparecidos, along with his producer and emcee handle, Rig 1, who delivers us the digital hustle and flow on the premiere of, “Duality”. Taken from McElroy's upcoming album, North Of Maple, available May 13 from Team Love; Ian keeps on cutting to the core in the ever-evolution of attempting to count the countless progressions of behaviors, beliefs, and thought patterns told in spoken poems with electronic backdrops.

Some where between an enlightened professor sharing existential and mind-expanding subjects, to a litany of theses on parade—”Duality” is a smart, stimulus overload of paradoxes and philosophical freehand-freestyle. With the minimalist, thinking man's EDM(or IDM if that's your acronym) production, the discourse flies all over the map tethered to the following solipsism segment; “Butterfly heart, and singularity party, indefinite response to stimulus dichotomy, appointed analysis the automatics of identity.” McElroy lyrically recites tales of characters, and situations of Midwest lore, that creates a “cerebral whirlpool” providing authorial observational to an onslaught of antinomies, to the eventual progression of synthesized shapes, and evolved forms of ideas.

Ian of Rig 1 talked to us about his new track, “Duality”, his upcoming album North of Maple, and more.

Between Omaha and NYC, how have these two places impacted your productions and influenced your sensibilities of process, and perhaps thought?

Half of the record was made with Omaha folk, so that directly influenced the sound. Simply as far as way of life and environmental aspects. Also the collabs were intentionally an open interpretation of the words by the individuals who worked on each track. The lyrics definitely have a New York tone in delivery and sense of urgency with the coloring of overwhelmingness[sic] incoming information streams. Everything being affected by environments whether noticed or not.

We know NYC is always popping with something but, what kinds of like minded or artists of interest did you enjoy or were close to in Omaha?

I grew up with the gentlemen of the Faint, Cursive, Bright Eyes, Lullaby for the Working Class and Fathr^ to name a few and am still close to. I enjoy all their music and their unique and relatable perspectives. Also fully love the music of Simon Joyner, Jake Bellows, and McCarthy Trenching.

On your upcoming album North of Maple, what kind of electronic sap and syrup were you drilling for?

Always getting the core of being a human and the fascinating countless aspects of that. As well as challenging beliefs, patterns of thought, and behaviors. Ever evolution.

Can you describe the single “Duality”, where you create the sound of something fighting itself into two entities?

It was created to represent the battle of perceptions and misperceptions[sic] we hold about ourselves in our minds. How these thoughts for some manifest as insecurities or exaggerated sense of self-importance. Delusional any way its sliced. Dapose did a dope job translating all of that clarity and confusion and sludge of the lyrics into music that matched the message.

Where do you see the evolutions of these DIY post-genre producer movements headed toward?

Not sure exactly. But seeing the lines blurring in all music makes for a bunch of cool sounding tunes. The DIY aspect is really exciting especially to see what bad ass tracks younger generations are making.

What are you playing the hell out of so far this spring?

What is up with Desaparecidos these days?

We are working on writing new songs. Maybe get enough for an album someday if schedules align.

We are gonna support the record with some shows in the New York area as well as working on doing some opening slots for friends bands. Also working on new tracks always.

Rig 1's North of Maple will be available May 13 from Team Love.