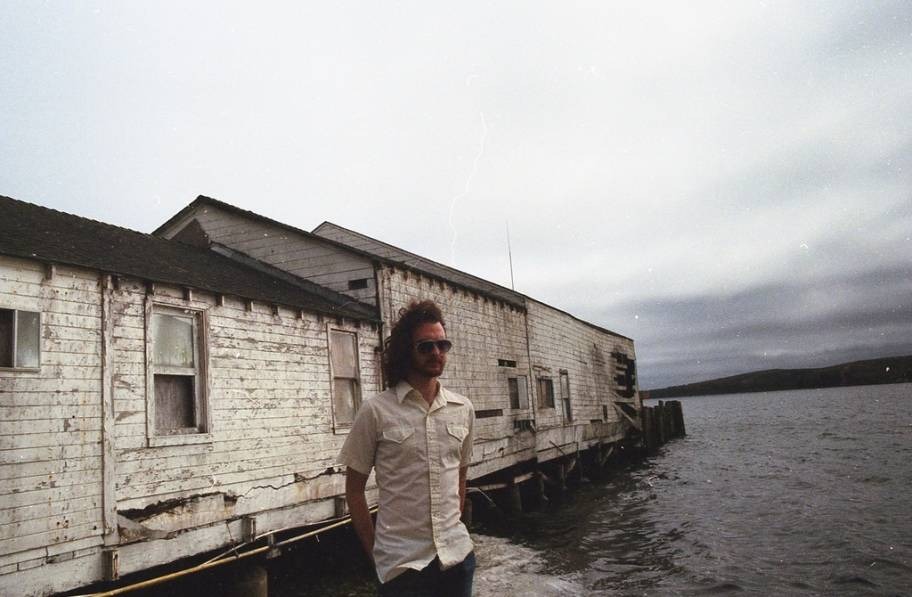 Michael Beach's album Golden Theft for Twin Lakes Records brings a waterside treasure trove of treats for the listener that craves adventures and excitement in audio. The San Francisco-centered artist well known for his work with Electric Jellyfish, Colossal Yes and Meercaz brings us the grand theft surprise of the summer. Recorded with the always amazing Phil Manley at Lucky Cat Studios with Colossal Yes and Comets on Fire's Utrillo Kushner on drums; they craft an album that picks and chooses the best parts plucked out of the modern golden era that sound better than anything before, for right now . . . and what tomorrow may bring. It is both an honor and a privilege to bring you a stream of Golden Theft followed by a discussion with Mr. Beach himself.

The starting point and initiating call brings an energetic and well spring of pure exhilaration on the opener, “The Exhilarating Rise”. With the action being raised on the up and up guitar lead swells, the much talked about “Straight Spines” plays by rules of the stop, slow down, then break down, then speed up; while flipping the mental switches back and forth before it drops you into the tall weed plains interlude, “In a Field”. Dovetailing from the guitar dirge from the “Field”, Michael continues to trek the earth with lyrical and hazy guitar values that move like the gravel and sediment beneath his feet on, “Dirt”.

Plucking pop ornaments from an illustrious background and back catalog of heroes, Beach flips the back dog-eared pages of memory with lines like, “I saw you picking flowers and leaves behind the school,” on the fuzzy nostalgic treasure trip that is “Static”. Sounding birthed from the mermaid mast found above the front stage of the Hotel Utah's hollowed out pirate's ship section is the twang and moan of, “There Is No End Of The World To Run To”. Placing the places of nearby travel on the map in a squal of dots is “Central San Joaquin” that salutes the diverse DIY noisesmiths of those surrounding vicinities. “Mountains + Valleys” keeps those life travelling desires burning from being birthed into the ocean before being thrown into life's fire of extenuating, extended and endless trails of winding circumstances. Keeping the mood mellow, Michael switches it up to the sparse chime electric droning desire for silence, as directly translated from the track, “Queria ter Ficado”.

The title cut begins by dispelling the myths with the introductory delivery of “There were several illusions, and now there are none,” while keeping the easy chair swaying back and forth in the soft rocking “Golden Theft”. With the clever placement of the titular push for a certain existential clarity, the following closing number “Eve” displays a proud showcase of Beach's songwriting wealth of abilities. An anthem that rises and falls with lyrics that walk along a highway, “pock marked with cumulus clouds”; a surreal quest for understanding involves a search for Adam and Eve with the likes of Jane Austen, Henry Miller and Jesus Christ. The wild, whirl of a ride supersedes and transgresses the concepts of original sin, lust, and mythological pursuits of origins that cluster through Beach's own big-bang scattering of comparative-cross-icongraphic studies like musical sparks.

Michael Beach shared some thoughts on recording his recent works, inside the artist's studio on the art of making an album, the encouragement of the Bay Area, and what he's been listening to as of late.

What kind of hills have you trekked and how many rivers have you crossed between the Mountains + Valleys EP cassette and the Golden Theft full-length? What mountains and valleys will you musically traverse next?

It's been about a year and a half since that EP, and most of my energy has been focused on completing this album, as well as the new Shovels LP. In that time, there have also been two US tours, two Australian tours, and one EU tour. As for the future, there are upcoming shows on the East and West coasts of the US this summer, and both MB and Shovels Australian tours planned for November. After that, I'm looking forward to some downtime.

The roles of the traditional singer-songwriter are constantly being challenged in SF, and with you being someone who delves into so many vast expanses in different expressions and experiments of style; what challenges do you find with your own creative muse in developing the marriage of your own varied stylistic attributes?

Seeing a musical idea through from start to finish is challenging for many reasons, but I don't give much thought to what style the songs are, or how they will fit together until quite late in the process. Most of that happens for me as the album is recorded, and there I have to give a lot of the credit for continuity and guidance to Phil Manley, who recorded the album.

What to you do you feel is encouraging about the community of the Bay Area that may or may not be affecting your own songwriting processes?

I feel fortunate to have gotten to know quite a few folks in the Bay Area whom I admire as musicians and songwriters. I can't recall any interaction that has been anything other than encouraging. As far as how that has effected my songwriting, I think that will become more apparent as time goes on.

The not-so-straight or linear shift of pitch and progression on “Straight Spine” is already getting a lot of chatter. What is it intentional to use this as a specialized effect to make “Spine” composed more like a visual shape piece of sonic poetry?

Hmm. It was intentional to use the tempo change as an effect in the song, but I didn't put much more thought into it other than I liked the way it sounded. If it adds a visual dimension for you, that's great.

Forever straddling and breaking beyond the post-modern 60s-folk-visionairy rock and 90s slacker scuzz, what does Michael Beach listen to when no one else is around, listening or looking?