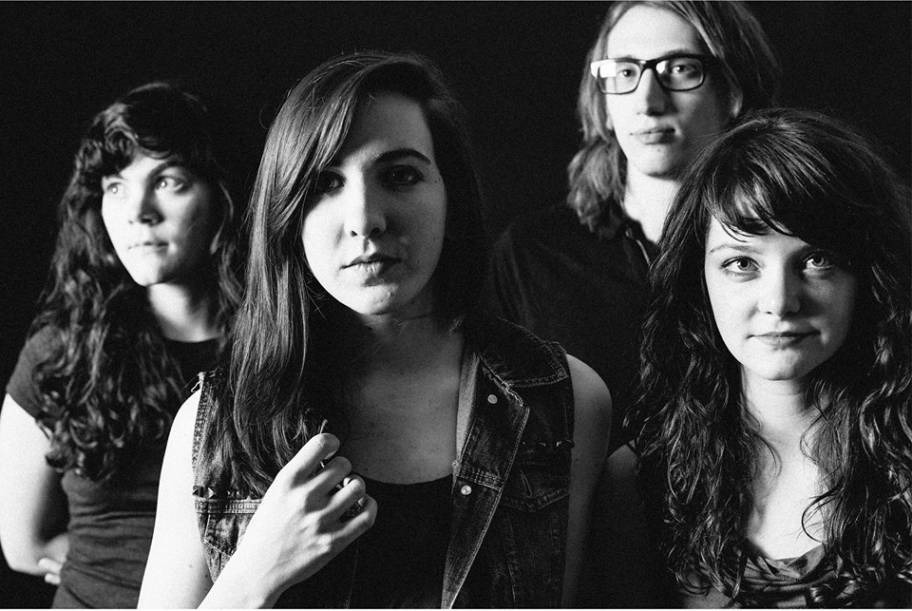 Portland, Oregon's Summer Cannibals introduced themselves to us earlier this year with their No Makeup album that captured our ears and hearts by saving us with well played and well worn singles, “Hey / I Was Saved” and “Wear Me Out“. With 2014 in clear view, the beautiful Cannibal crew of Jessica Boudreaux, Marc Swart, Lynnae Griffyn, and Valerie Brogden gave us the honor and privilege of premiering the title track from their forthcoming EP, Make You Better. In the same way that “Saved” made our summer better, “Make You Better” will brighten up your surrounding weather, turn up your thermostat with a rocking bit of accompaniment for holiday/post-holiday stress to improve your winter time blues.

“Make You Better” is a rad indie statement of Summer Cannibals' solidarity that rides off a notion and wink that No Makeup was just the beginning. In the similar way that “Hey / I Was Saved” made us forget that the oughts ever happened, “Better” is dressed up in denim jackets and operates on a level of awareness and consciousness that only the brightest and most enlightened of the great American Northwest seem to possess.

Jessica grabs the song's focus from the beginning to the rumble of Lynnae's bass and Valerie's percussion. “All these distractions only exist to complicate the things that are simple and standing right in front of me,” which cues Marc's guitar as the confessions and thoughts on self improvement are explored further, “you could make me better, you could make me feel, but I exist in a space that is selfish and unreal.” Like any deep discussion in nearly any relationship, Summer Cannibals explore the options ups, downs, ins, and outs of how we affect others and want to change others within the endless complications of interpersonal affairs. And despite the imperfect existences and tenses, you can't help but smile and take a certain comfort in the human cause when Jessica sings, “in a perfect world, you never say sorry,” at the end of the chorus.

We had the pleasure to chat with Summer Cannibals' Jessica Boudreaux about the buzz surrounding their Make You Better EP, holiday hopes, upcoming excitement, and more great things.

“Make You Better” is an incredible title track, what is the dichotomy and interest you all share in how others can make each other better, greater, sane, insane etcetera?

Thank you! I think as a group we make each other better in a lot ways . . . better musicians for sure. When we have weird moments as a band we sit down and talk about it and try to get better at how we communicate and interact with each other. In my opinion that's about the extent that you should try to change someone else. But the song was really written more about romantic relationships.

Is this is a song that advocates changing other people for better or for worse?

No, it's more about the delusion that it's possible to really change someone that you're in a relationship with or that they could change you. The song is saying if I had it my way I'd change all these crappy things about you . . . but I don't and it's not a perfect world so I'm not changing anything. It's also saying sarcastically at one point, 'you could make me real' . . . I think sometimes we get reliant on romantic partners to make us a whole but ultimately we're the only ones who can do that.

Really excited about the upcoming EP, what do you all feel was the guiding light of group tightening and betterment for all that Summer Cannibals abided by?

Well, we work hard and practice a lot. We just released our first record in August but this is the first thing we've recorded completely by ourselves at home and the first recordings we've done with this lineup and I think that it really brought us together. The group of songs on the EP have really helped us figure out where we want the next record to go and I think they give you a sense of who we are as a group.

Winter in Portland rules! Nothing really changes for us but it's all gross and rainy which is perfect weather for staying down in our basement and recording our new LP! I'm also REALLY into Christmas so I've been wanting a holiday band photo, everyone showed up in denim jackets the other day, accidentally, so I put my camera on a self timer and took one.

None as of now . . . I'll probably fall asleep at nine. Marc will probably get drunk, lost and then cry. Valerie says, 'I want to be doing weird stuff like have a seance, howl at the moon and burn effigies of all the negative stuff that happened in 2013.' Lynnae says, 'I'm excited to ring in the new year with my favorite people. I usually end up being DD, but maybe I'll go crazy and get drunk and kiss a bunch of strangers. But then I'd miss out on all the free soda…'

How will you all ring in the new EP?

We're having a release show at the Doug Fir here in Portland January 9. The EP is only available on 100 limited edition cassettes via New Moss Records and first 50 people through the door will receive a free copy…SO these are going to go fast! Also playing the release show is a new-ish local band called Spookies who we're looking forward to seeing live and Hurry Up which is Westin and Kathy from The Thermals and Maggie Vail…they're so amazing live and are releasing an album later this year which we can't wait to hear! Definitely one of my favorite bands right now. Then the following week we're heading up to Seattle with The Thermals to play show at Neumos which is going to rule!

Summer Cannibals' Make You Better EP will be available January 9 only on 100 limited edition cassette tapes from New Moss Records.

PrevPreviousFriend Roulette, “You Drank All the Egg Nog”
NextThe Best Free Music of 2013Next