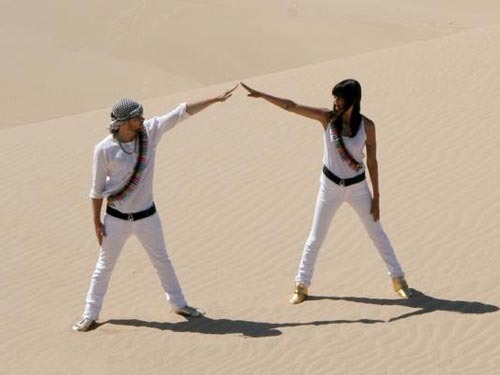 Jab yer fists like ya just don't care cuz Rainbow Arabia has a new song. But don't even think of downloading it from this site, you asshole.

Let me start by saying I'm sorry, but this is so effing Los Angeles of you, music industry. Yeasayer and Vampire Weekend never went this far to spell out their particular World fetishisms, but I guess at this point the grab bag is getting lighter, and we don't want anyone to be confused by Rainbow Arabia's influences. (Hint: Not Omaha).

Let's start with the faux terrorist costumes pictured above, presumably shot not far from Joshua Tree National Park. No one's getting political here, we're just hanging out with some bullets and headscarves, and… can you read it in the sand? I know it's tough, but just try! What kind of music do these guys play?

If you guessed terrorist music, you're right: they know that scale you heard that time in that cab you were in! And they use it… in all their songs!

But I'll stop being pissy about this. That they chose a particular style and got image-conscious about it doesn't stop their songs from being very catchy. They're dense, syrupy, and tastefully arranged. They've only been a band since March 2008. And give credit where it's due- Tiffany Preston's vocals are marvelous, even if Lizzi Bougatsos, with whom Rainbow Arabia are touring in November, innovated a lot of the techniques put to use.

RCRDLBL, that monolithic site made with profits in mind (for the independent artist, of course), is hosting this voluptous new track, which goes farther than “Let Them Dance”, the track that's already gotten some circulation, in not trying so hard to set of our “Arab music” alarms while sneaking pretty straight forward U2 power pop under the radar.

I can give you “Let Them Dance” for free. It's pretty good. Especially if you like the thought of The Edge ripping it on an Oud or a Kanun or something.

And the new track is featured here too. It's called “I Know I See I Love I Go”. Geesh.

Look, this music will appeal to people for different reasons. There will be some (perhaps too much) excitement that another American indie band ripped another corner of the world's most obvious sonic signifiers in a sort of “integrated” mash up, throwing the requisite Afro-Cuban/Dancehall/Baile beats into the mix. The rest of us will nod our heads a bit and throw this shite on a mixtape for our friends and mothers.

Go to Rainbow Arabia's RCRD LBL download page to get it for your iPod et al.