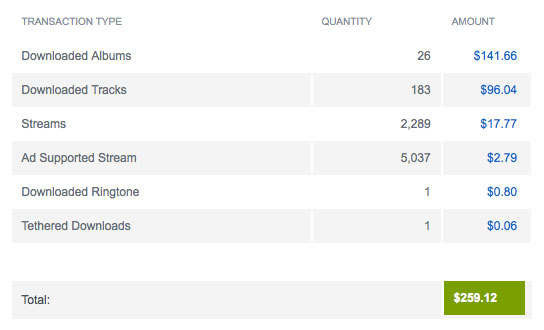 The socialist in me is always looking for more free shit, but even the capitalist in me can't argue with the reasoning for giving away music for free versus streaming.

In recent days we've seen Apple launch their music social networking site Ping, only months after their takeover/shutdown of LaLa, which did have a payment model, and replacing it with SoundCloud, a service that has yet to institute one. For whatever reason (my guess is the cool looking player that shows you the sound waves) artists — especially independent artists — have embraced the SoundCloud player much more than its LaLa predecessor. Based on Compete rankings, in just a year's time, SoundCloud has gone from 121,956 unique views in July of last year to 1,053,184 in July of 2010 — an increase of nearly 900%. So it begs the question to be asked, who does this benefit?

Like radio before it, the common belief is that streaming will be the future of internet music, paying back on a royalty or ad-revenue basis. With many bands and labels now prescribing to this theory, there appears to be a growing semblance of control over illegal file sharing, and with indies and even unsigned bands on board, the movement also has the “cool trendsetters” on their side.

But does keeping your music to streaming-only actually benefit the artist? Since SoundCloud does not offer a pay model yet, I've pulled a monthly Impose Records report for one of our artists for streaming services that do. As you can see, many more people are streaming their music than actually buying. Yet in the ad supported streaming system — i.e., you are paid because they make money off the traffic you send them — 5,000 plays will make you less than three tracks sold. Just a regular streaming site that relies on a membership system (eMusic, Zune, etc) will net you a bit more, but still not nearly as much as selling music.

Now let's assume that in the ad-revenue supported systems they average $5/cpm, or $5 for every 1,000 streams, meaning 5,000 impressions for them equals $25. So for every $25 you make them, they pay you back $3. Of course, this doesn't imply they're greedy or evil — they have a network of server space and bandwidth to support and pay for — but it does make you wonder why the <em>artist should support this system? Chances are if they release one mp3 for free to 5,000 people, the return will be at least one record sold. If you sell it for $10, that in turn is over a 300% better profit margin for just one album sold. It jumps to 1000% higher margin of profit if you sell three albums.

Maybe you're saying to yourself, 'yes, this might be true for artists with fewer albums sold, but what about an artist who sells hundreds of thousands of records?' Keeping it in scale with the numbers presented here, a million album-seller will get streamed a little less than 300 million times, with 200 million of those coming from ad supported streams. For the artist — again, based on the numbers presented here — that equals roughly $111,000.00 in ad-supported streams. Not a bad payday. Based on the $5/cpm model, the site itself is making one-million dollars. A much better payday.

And who owns these sites? SoundCloud remains an independent company even though they are supported by the Apple platform, but they don't even pay or support advertising (yet). Universal owns eMusic, Viacom owns Rhapsody, Microsoft owns Zune; in other words, the days of the major label may be numbered, but if you use these services, you're still keeping them fed. Still, there are smaller streaming sites (BandCamp, Deezer, Beezik, etc.) and even the small guys need these services to compete. So maybe the real question is, who does it hurt?

The simple answer is, it hurts the very people it is looking to serve. By letting your music be held and distributed through these means, you are not only feeding the machine that is helping constrict the free exchange of ideas we all have come to take for granted, you are in turn, hurting the independent community; i.e., record stores, blogs and even the artist. If we're all streaming from SoundCloud — no matter if it's from the pages of Impose, Raven Sings the Blues, your own personal blog or even a site as large as Pitchfork or Rolling Stone — we are all under the umbrella of Apple. And to make matters worse, with SoundCloud you're doing it without any payback.

Sure, they're providing a platform for easy accessible free exchange, but was that ever part of the problem? Going back through the legal battles of the last decade, the problem wasn't access to music, but how to limit the access. It now seems as though the very powerful have come to the conclusion that they can't limit the access, so they might as well try to control the outlets.

This is very similar to when CDs became the norm. Claiming the music industry was “dying” from consumer cassette tape duping, CDs were ushered in by the major labels. Because the technology was new and relatively unknown, despite only costing about $1 to make they were sold for upwards of $20. The independent community — while slow to accept it — were forced to compete with similar sticker prices. This in turn hurt independent retailers who couldn't afford the exorbitant wholesale costs. It hurt the labels who couldn't compete without drastically slashing prices. And it primarily benefited the labels and companies who could afford a large enough budget to both market and support these prices.

The result? The era of large retail chains who would only carry the most popular (i.e., major label) albums became the main — and in some towns — the only outlets for music. Compare that to the first decade of this millennium. Major labels crying they're going broke and major retail chains closing and/or shrinking their music catalog, while boutique stores, vinyl and collector pieces, indie labels, and most importantly, the number of independent artists we were given access to, exploded.

Again, it's not an issue of corporations vs, the indies, it's making a conscious decision to support the community that supports you. If Eminem is on Universal, it makes sense for him to promote himself through Universal music channels. But my guess is a very small percentage of people who are using SoundCloud have ever spoken to, let alone worked with, anyone from Apple.

Obviously at some point there will be an independent source that rivals and mirrors a SoundCloud model. And at some point the government will also institute a federal royalty rate for streamed music. When that happens, I will be able to support this system knowing the scale is the same across the board. Until then, unless you work for the company offering the streaming services, you should stick to giving away the good ol' fashioned mp3.