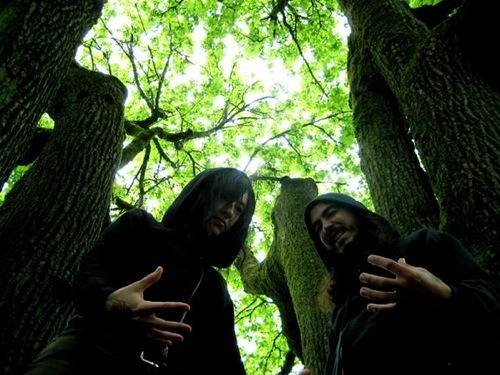 Big Business have a new record, Sunn O))) is employing French horns, Children are like the second-coming of Jesus Christ – except fronting Testament, and Mountain Goats dude loves the new Cattle Decapitation. Add in all the items contained below, and it's like the heshers have inherited the earth, and it's about to become one big Heavy Metal Parking Lot. Welcome to our mini-metal renaissance.

Are you a fan of Floridian two-pieces doing thick-as-fuck Southern psych-sludge? Or a song title like “Growing Slow” actually feeling like it is actually doing just that? Do you like Kylesa, Sleep, and/or Eyehategod? Long, contemplative walks through the beaches of Hell? If you aren't sure, you can test those waters with the upcoming album from the Floridian duo Dark Castle (pictured above); Spirited Migration, out May 26th on At a Loss Recordings.

Sure Tournament say they have been described as “hardcore gay drug-punk” (so it says on that cyber-tomb known as Myspace), but I would rather say heavy doses of Neurosis, His Hero is Gone, and a bunch of the really good screamy hardcore from San Diego circa the end of the last century. Their LP Years Old will be out on Forcefield Recordings in June.

And then there were a bunch of Canucks who smoked a lot of pot, and realized that Josh Homme was a whole lot cooler when he was getting fucked up on peyote in the desert and playing in Kyuss. They call themselves Quest for Fire, and their June debut is on Tee Pee Records.

Also of interest is a new Torche video scaring the shit out of the many people who accidentally stumble upon it:

Torche “Across The Shields”