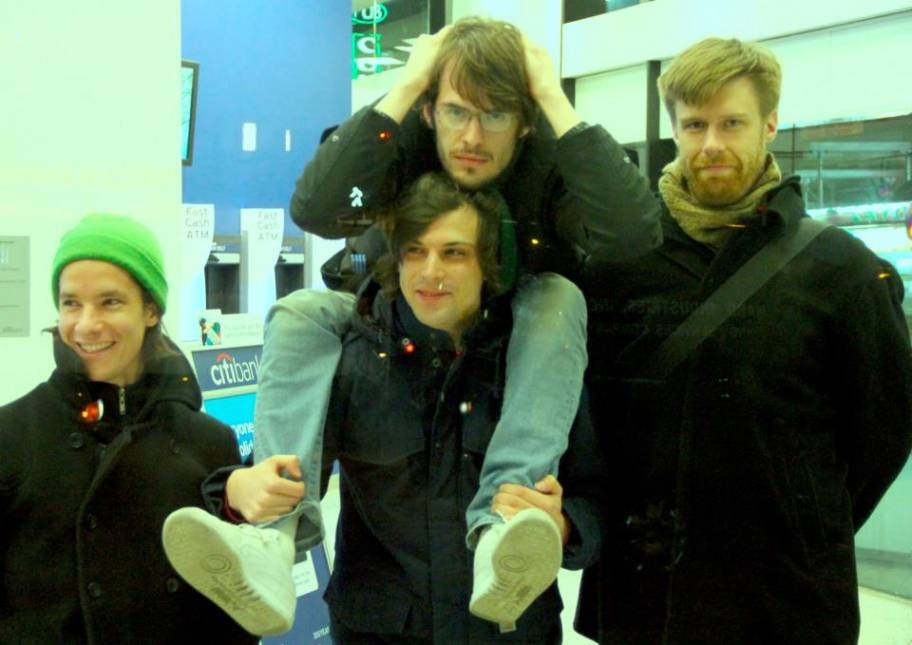 Fresh off the buzz from the Twin Loss EP, Brooklyn's Zula brings about the glitz and pizazz with the premiere of, “And More Business”. Taken from their upcoming This Hopeful LP from Inflated Records, you are invited to bask in the head turning thrills of unfinished business and new hopes from the future of Fall 2013.

The “Business” begins with the alluring synth shimmer as the piano paddles off the beat. The big question of, “what will you want” sets up the assembled dance groove where the keys bring out every iota of addictive audio fragments into the song's upswing fray. Zula handles their business with an encompassing, 'all together vibe' that is fleeting, flighting, and wild at heart as the chorus tightens the group up even closer in the repeated lines of, “you and me”.

The Brooklyn group brings a musical bond between each other that cannot be quantified in terms of charts, graphs, numbers, scales and weight. Foregoing the mathematics and science theorems, the business is built on the rock of relationships that are best expressed through the joyful noises of wah-wah guitars, melodic twinkling effects, and a dizzying song progression best compared to a spinning ring around the rosie daisy chain of interexchanged hands and interlocked arms whirling to and fro in a clockwise, then counter clockwise directions and circular formations.

Zula's Henry and Nate caught up with us to discuss the single “And More Business”, the Twin Loss EP and the upcoming album.

How and when did the two of you cousins start making music together?

Nate: First time was in middle school when we went on a camping trip to the Adirondacks with my dad. We spent most of the trip making a horror movie called “Cemetery Island”. Henry had just started writing songs and brought his guitar along and we recorded a song called “indian lake” for the closing credits. I sang harmony.

Henry: Music became an important part of our self expression when we were teenagers, and we connected on a lot of artists and our love for jamming. Thanksgiving family gatherings, where we played roots and rock tunes with our aunts and uncles, began to show us each year how much Nate and I were moving away together aesthetically – towards psychedelic ambience in the years before Zula. By the time we were playing with Mike and had a rhythm section, after college, we were looping and listening to a lot more dance music and electronics – angular stuff that somehow kept it a little weird and threw the listener off.

What is the behind the business and unfinished business pertaining to “And More Business”?

H: The title of this song is a result of a digital writing process – in which you must 'name the session' before you may record a sound. It can be anything really. I think both Nate and I generally take this as an opportunity to free associate, and bounce music off some phrase or set of words.

N: We usually keep the original logic session name as the title unless it really grates at us with time or is so absurd that it takes away from the song. I guess like 80% of the tracks on the LP were titled before they were written.

H: “And More Business”. The song concerns the cares and hopes that follow you like spirits at all times – even when you are in a most mindless moment of passive routine, the midst of the 'ongoing'. In doubt about what's happening in the present or future, you can carry with you the assurance of what's important to you. So as the business continues, you can smile to yourself – 'I'm doing this, ultimately, for love'. You can smile because you don't have to understand it all.

How were you both inspired to title the EP Twin Loss, and how do you feel that people psychologically and psychically seek out these counter parts in every day life? How did this heavy concept inform your musical approaches?

N: Twin Loss is one of the few tracks that was deliberately given a title. I had been thinking a lot about the concept and emotions attached to it, the spiritual void and longing from losing a twin–even if it occurs before birth and is transmitted through cellular memory. Whether or not this literally happened, I think it's a pretty powerful metaphor. To be searching for that lost counterpart in romantic relationships, but failing to make the connection and ultimately repeating that loss again and again.

H: There is lyrical thread we carry between us of reaching outside of ourselves to be part of something bigger. The intimacy of partnership is one of the most profound reaching outside of ourselves that we feel capable of – and we each are inspired by that drive towards love. In thinking about the production of Twin Loss preserving that sense of intimacy was important to us – we want you to feel close to us; we'd like to make humanist music. The arrangement and vibrations of the track pull us in close when we're playing that track live together.

What can you divulge on your upcoming LP?

H: The LP was mixed by Dana Billings (of Big Mean Sound Machine, some of whose gear we used), who largely engineered it as well.

N: Dana's an old friend–we spent a few days with him in Electric Wilburland studios, in an old church outside of Ithaca, NY. That place feels like home–we were sleeping there as well. You can really get you head inside the vibe of an album that way.

H: We're very inspired by delay and there's lots of it on the album. For a couple of tracks we traded in the boss delay pedals we usually use for vox with a Roland Space Echo, which would repeat the sound a few times cleanly and then unrecognizably mangle the message into a squiggly mess. Dana's a drummer, and we got pretty geeky together with the drum sounds. There's a different kit on each song.

Zula's This Hopeful LP will be available October 29 with pre-order already in effect from Inflated Records.

Catch Zula on their mini-tour beginning tonight with Starlight Girls on the following dates: