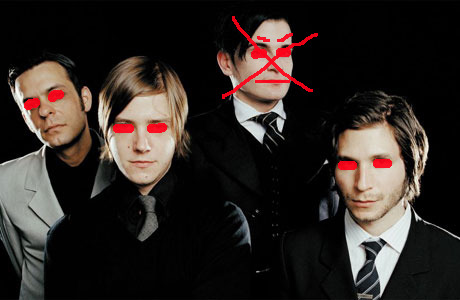 Being a celebrity's hard.

Bassist Carlos D stayed on while Interpol worked on a kick-ass intro page for their website, and stuck it through a few more bass octave lines for album number fourth, but not without magically disappearing a blog that talks about his venereal diseases, and penning a college essay on why he got herpes in the first place.

Let's just leave it at that:

THE ONSET OF CELEBRITY

Celebrity is a kind of affliction, a malaise, in essence, a condition.

It is part of a psychosis derived from the overabundance of positive value assignments made by a crowd choosing a particular visage to carry these assignments.

The wearer of this visage experiences this assignment as something against his will. And thus, understanding that he will never be able to meet all the people who have assigned his visage this positive value within his lifetime, as there are too many to meet in the limited time frame of his lifespan, the wearer of the visage experiences this fact as a wound. This deep wound leads to the psychosis called the onset of celebrity.

The inability of the man to manage all of these positive value assignments within his lifetime is a crisis of identity in that he no longer is in charge of his face; the crowd has taken it from him.

Upon the onset of celebrity the man experiences a fundamental rupture within his psyche that transforms him into the famed -ego.

From the moment of the onset, the path of the famed -ego leads inexorably to dehumanization. The famed -ego is in a continual state of mismanagement of its relationships with the crowd as it is powerless to control the gradations of esteem accrued upon the visage of the person ensconced around it. This abject powerlessness produces a failure in causality between choice and consequence, reducing the famed -ego to a state of total arbitrariness.

The visage is the chief signifier of singular, personal identity; it is the meeting-point between the subjective reality of the ego and the objective reality outside of the ego. Since the famed -ego is in a continual state of mismanagement of this gateway, the social reality that has inundated it with positive value assignments has effectively stolen his face.

In this vacuum of meaning, the famed-ego is disconnected from the self’s personhood. The inability to establish meaning for itself places the famed-ego in an interminable bind of nihilism of action, a purgatory where no action or reaction produces stability nor stepping-stone to personal fulfillment. This is existential imprisonment, which is to say a total loss of free will. The self can not feel its own humanity, know or show love; the crowd has stolen the face and with that, the self collapses into the void of the onset of celebrity.

There is no break from this condition, no more than a person in a wheelchair may break from his affliction and walk on two feet for a moment. Because the onset of celebrity is an attenuation on the value of the visage dictated by a social imperative, it places the famed-ego in a space over which it has no control, under a condition of paralysis. The famed-ego inhabits a world in which the social reality blockades its path choices. These blockades have a logic known only to the collective responsible for positioning them, but the famed -ego has no epistemological access to this logic. Thus, the famed-ego experiences its reality as caprice.

Celebrity is indeed a psychosis. But as one can glean from this account, it is no simple hallucination nor mental condition. It is not treatable by medication or therapy. It is an ontic-psychosis, a psychosis not of the mind but of existence, the existence of the merciless electrical current that bonds the crowd with the famed-ego.

The affliction of the onset of celebrity is a result of one of the logics of the ontic plenum established by the crowd via their positive value assignment to the visage. Thus, the famed-ego can not even locate a point of origin for its psychosis within the development of its own ideation. That point of origin is located from without the famed-ego's universe, at some arbitrary coordinate within the ontic plenum of the crowd logic.

If celebrity is a malaise, it is a malaise acquiring its élan from social forces willingly conspiring with each other in a type of concealed Totentanz. This interaction congeals to the phenomenal realm, to the universe of things.

Celebrity is not just psychosis, a distortion of cognition isolated to synaptic verities of particular mentation. It is ontic psychosis, a condition in which the psychopath is a unity of social forces that bond the crowd with the famed-ego and thrust the condition of celebrity into the milieu of an ontic plenum established via social contract. Thus, the ontology of celebrity relies heavily on the understanding that existence is an agreed upon reality.

The famed-ego is entrenched in a hysterical purgatory.

This hysterical purgatory is the ontic node of the famed-ego’s psychosis. It is continually repositioned by the unknowable crowd logic that sets its condition in the first place, like a pebble rolled over and over by the undulating movements of a gigantic centipede.

As the centipede rolls this pebble over, the famed-ego, locked in its purgatory, experiences life as a state of tragedy.

Tragedy is process. Process has procedure. Therefore, the onset of celebrity has a procedure.

My Friends Told Me About You deploys the dramatization of this pursuit as a primordial conflict between Man and Woman. It assigns the famed-ego the phallus and instantiates it as a genderized polarity called Man. To depict the rubbing-against of the famed-ego as-Man with the “city limits” in which the crowd has ostracized him, it places Man in opposition to Woman. In its isolation, the famed-ego can not see the crowd that has placed it into its purgatory. However, in order to live the struggle of its purgatorial realm, as Man, it contracts the horizon of the crowd forces that constrict it into a genderized locus that opposes it. This opposition is Woman.

The opposition between the famed -ego-as- Man and Woman is characterized in My Friends Told Me About You as misogyny. In its tragic fall from grace, once it has acquired a genderized articulation of identity, the famed-ego experiences its purgatorial isolation as a total Loss of Love. The absence of Love is Hate, and thus the opposition this absence spawns takes on the character of Disrespect for Woman, or misogyny.

Misogyny in My Friends Told Me About You is an effusion of imagination that results from the catatonic rupture occurring in the psyche of the famed -ego from the onset of celebrity. It is a component of the epic complex of suspicion and paranoia that constitutes the empirical tableau exhibited across the photographic slideshow of then film’s display case. The failure to establish a reliable temporal axis of linearity and the excursiveness of the event horizon of the film’s narrative are necessarily symptomatic narrative structures emanating from this epic complex, of which misogyny is but one component.

The process of narration of the procedure of the onset of celebrity involves the operations of the handed-down filmic -narrative apparatus colluding with the conceptual axes of three resonances, nonlinearity, surrealism, and misogyny, which operate on a metatextual level.

This totality is the instruction of a tragedy.

The crowd agreement to assign its visage positive value. It is an atemporal process resultant from the concurrence of psychic- ontic effusions from the social reality. Thus, the onset of celebrity can not be a story per se; but it requires narration, a specific type of narration, to illustrate itself. As the onset of celebrity acquires articulation through narrative, its conceptual framework is infused with particularity. As the narration unfolds, we see this particularity, of necessity, as devastation.