Dan Deacon is playing Cake Shop basement in May 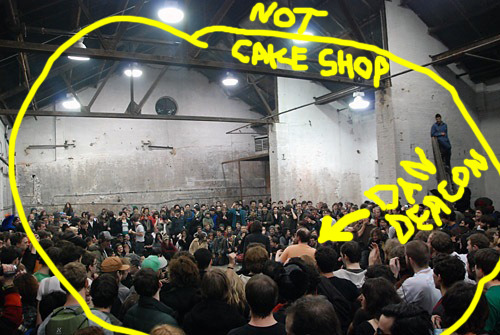 As Cake Shop's co-owner and manager Andy Bodor put it, “I always get the best ideas too late and then don't wanna just wait for next year to do them.” So he's starting up his crazy plan Saturday instead of, say Spring 2011: For the entire month of May, Cake Shop will celebrate its fifth birthday with blowout shows that go above and beyond your average Cake Shop jam.

What does this mean exactly?

For one, that Dan Deacon is playing Cake Shop on Saturday, May 29. And while Bodor will release an official schedule, hopefully before May actually begins, he sent along a short list of acts, including Das Racist, Fresh and Onlys, The Styrenes, Tyvek, Small Brown Bike, Jeffrey Lewis and Kimya Dawson's Bundles, Aa, Girls at Dawn, Old Time Relijun, Pterodactyl, Extra Life, Larkin Grimm, and Wild Yaks. Local heavy hitters and global underground stars, bam!

While much of this listing info is already available on the Cake Shop website, Bodor emphasized that each night of May will feature “different themes and drink specials to keep people coming in and on their toes.”

Mainly, though, for those who aren't Dan Deacon virgins, just shut your eyes and visualize that flashing green skull in the shoebox that is Cake Shop's basement. Instead of forming us into massive dance circles Deacon will have to resort to encouraging us to make a single-file conga line.

In all likelihood this plan will only come to full-bake as each night approaches. The official “crazy noise night” Impose has been asked to do for next week Thurdsay, for instance, wont be fully announced until a few days prior. Keep on your toes.