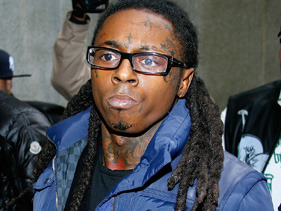 Lil Wayne's New York trial for possession of a loaded weapon back in 2007 goes down today.

New York is considered one of the harshest states with regards to gun possession, and sentencing is assumed to be about a year, or eight months for good behavior:

Rap star Lil Wayne is poised to spend as much as the next year in a New York City jail cell instead of a spotlight.

The Grammy Award-winning rapper is set to be sentenced Tuesday after pleading guilty in a gun possession case. His plea deal calls for a year in jail, though good behavior could shave that to as little as eight months.

He pleaded guilty in October to attempted criminal possession of a weapon. He admitted he illegally had a loaded gun on his tour bus in July 2007.