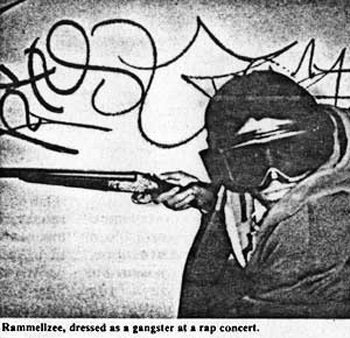 I got to know the RAMM∑LLZ∑∑ in what turned out to be the last years of his life. At the time I met him I was working for an art book publisher based out of Brooklyn. I had been aware of an artist first active in the 80s downtown scene whose work, although incredibly influential, was little known to the larger public. More importantly there was little information on him anywhere and I wanted to do a book on him as much to satisfy my own curiosity as to get his work out.

This artist, the RAMM∑LLZ∑∑, was an anomaly, synthesizing all the best elements of a chaotic, creative scene. Born in 1960, in Far Rockaway to Italian and African American parents, he began painting trains in 1974, and in1980 he was a 20 year old at the heart of an exploding downtown NYC. As far as I could tell he was like a cross between Leigh Bowery and the Bad Brains, the son of Sun Ra, a hip hop GWAR, Eek-A-Mouse in armor. And that was just his personality as a performer. I also knew that he palled around with Dondi, Jean Michel Basquiat, and a host of other downtown luminaries, he appeared in Jim Jarmusch’s Stranger Than Paradise and Charlie Ahearn’s Wild Style, and that he could very well be the father of wild style graffiti itself.

The first time I spoke to him on the phone was a terrifying experience, both cryptic and vaguely threatening. When I started visiting him at his place in Battery Park City I was almost surprised when a tall, slow-moving, slim man with a booming voice, in a tracksuit and a doo rag—and not a monster—greeted me at the door. He made me feel completely welcome as we drank vodka and smoked cigarettes while he regaled me with stories of boosting clothing right off the runway in Milan with Basquiat, playing thrash metal with Buckethead, or helping to avert a gang fight during a performance at Lincoln Center. But, at certain times, when I asked him about the specifics of his theories or of the meaning of his art I would feel the chill I first felt talking on the phone with him, as his voice would drop and take on a hard edge and I knew I was no longer speaking to a man, but to the RAMM∑LLZ∑∑.

The art that he created over a lifetime amounted to an all-encompassing cosmology involving a pantheon of 13 astronomical gods, whose battles RAMM∑LL acted out through rap songs and performances, meticulously constructing individual personalities and accompanying kaiju-influenced outfits for each of the 13. These costumes ranged from simple combinations of masks and gloves, to all out Iron-Man-on-acid robotic armaments, and were constructed out of toy guns and cars, discarded Halloween costumes, hubcaps, plastic punk jewelry, and anything else that could be destroyed and reassembled into wearable weaponry. The biggest and baddest of these gods was the RAMM∑LLZ∑∑ himself, and the suit of mechanized armor he would don for rare performances, the Gash-Olear, was equipped with fully functioning pyrotechnics and took over four hours to strap on. Aside from this, he created numerous paintings, sculptures, collages, comics, and writings detailing the warfare of the gods and the ongoing battles between symbols and letters. His early work was collected by Larry Gagosian among others, and in his later years he collaborated with high profile urban brands Supreme and Kid Robot.

His influence can’t be overstated. He was rapping, painting trains, and break dancing before anyone had used the term hip hop, before the Sugarhill Gang had a single, before the different elements filtered downtown and were folded together in the public consciousness. And despite how he might have felt about it, he helped to ease that transition into mass awareness and helped unite the disparate manifestations of street culture under one banner by embodying them all. He was in the first show of graffiti art at the Fun Gallery; he was part of the Roxy Tour and was flown to Europe along with the Rocksteady Crew, Afrika Bambaataa, and Fab Five Freddy to spread the word of hip hop abroad; he freestyled constantly and pioneered new techniques on important recordings; and above all he was able to learn the language and engage with the art world.

He took the money from his initial commercial success and used it to attend FIT. It was there that he began building upon his earlier theories on art, culture, language, typography, history, astronomy, physics, and mathematics. In the pages of Art Forum he claimed to have been given knowledge through the collective energy of the third rail. Striving for knowledge. This probably more than anything else set RAMM∑LLZ∑∑ apart. He took influences from punk rock, cartoons, Five Percenters, transvestites, new agers, and the artists, gangsters, and thinkers that surrounded him, and fused them together in a sublime mess. Gothik Futurism and Ikonoklast Panzerism, the phrases he coined to describe his work, took their terminology from academia, art history, and science, but applied to what he had learned in the subways. The additional knowledge and historical context gained through study fueled his creativity, opening new doors into the past and future, and he laid out his new knowledge in text and in verses as his visual art progressed off the flat plane and into sculpture, and eventually mechanics.

He was a weirdo in the best way possible, and a visionary. Because he clearly embodied hip hop and helped to set the terms, from the beginning hip hop had to include all the monstrous, futuristic, sci-fi, personality shifting, spaced out madness that was the RAMM∑LLZ∑∑. Unfortunately the book we were working on never materialized. The funding fell out, I switched jobs, and we eventually lost contact with one another. There is no word yet on why he passed, but I am sad to see him go. I think his excess energy ended up burning him out: he had weak knees from break dancing, weak kidneys from aerosol fumes and model glue, a weak liver from drinking, and weak lungs from smoking. The general public may never be aware of his impact, but it will certainly feel it, and this seems to be what he wanted all along. In a culture born of a desire for fame, RAMM∑LLZ∑∑ put on a mask and forced his way outside—transforming himself into a true god, an unseen force manipulating the world he dominated as he looked down from above, laughing.