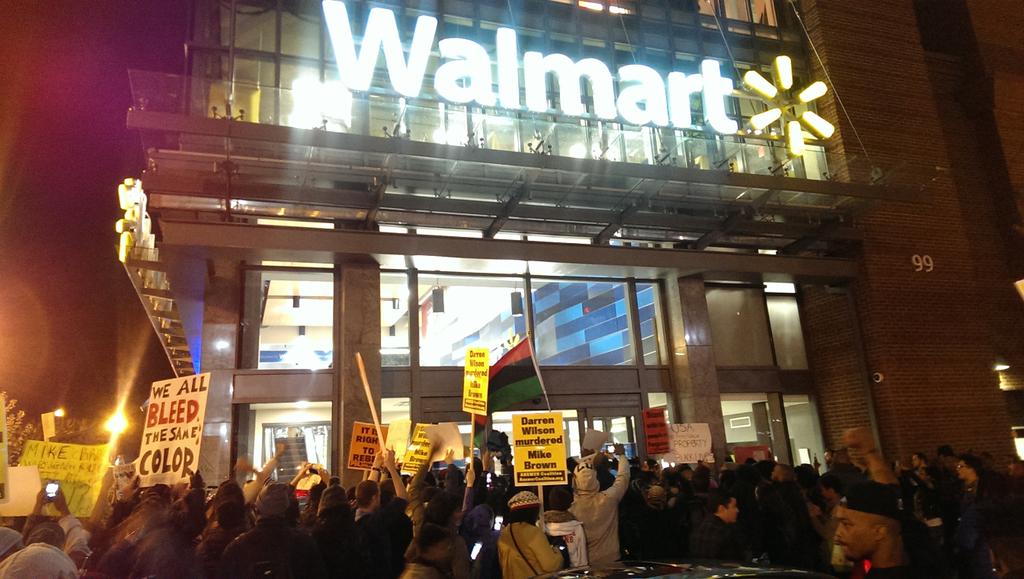 When we think of the day after the symbolic dinner meeting between White Colonizers and Indigenous Peoples, we must think of the systemic capitalistic structures that make Black Friday discounts possible. That 80% discount is an ornament of the status quo of racist-capitalistic economic intentions.

At Tuesday night’s Ferguson solidarity march in Washington DC, a Walmart store was intentionally added to the protest route. As demonstrators marched past they shouted, “Shut Walmart Down.” When people were asked, “why Walmart?” the responses came down to the need for dignity and respect across the board. “Shut it down” is asking for much more than money, much more than changes to the law–it is asking for abolition of the oppressor’s institutions.

The first two largest employers in the world are the U.S. Department of Defense (3.2 million workers) and the Chinese Army (2.3 million workers). The third largest workforce on the planet is the Walmart Corporation, employing 2.1 million workers throughout the world and 1.3 million workers in the United States. Maybe you already avoid shopping at Walmart, but as such a massive employer they are the big cop of classism. They are key in constructing and perpetuating the racism, systematic fear of workers, wage theft, tip theft, retaliation, and union busting at consumer spaces that are closer to us. They dictate how all businesses act, whether it is a neighborhood cafe, a thrift store, or a natural foods market.

The Walton family, the owners of Walmart, have more wealth than the bottom 43% of people in the United States and more net wealth than 133 individual countries. They make Vice look like a DIY tape label. With all that wealth, Walmart pays wages that leave most of its workers below the poverty line. The result is that a heavy percentage of its employees end up on public assistance. Opening a new Walmart store costs approximately $900,000 in public tax money per year because employees are forced to sign up for food stamps, public housing, and the store pushes for tax breaks, etc. We the public are funding Walmart.

But workers are fighting back, and as such a large part of the workforce the Walmart workers’ fight is a growing and necessary flame to the revolution’s fire. Their victories mean advances for workers everywhere. At first Walmart workers organized a few stores and the meat cutters formed unions. In response, Walmart closed the stores and cut the meat cutting positions. Organizing store-to-store was impossible with a beast like Walmart. Recognizing the company is itself an industry, workers began organizing industry-wide. This Black Friday, Walmart workers will be leading strikes at stores throughout the country, and they are asking you to join them. Look up the action closest to you here.

Black Friday is a particularly egregious spectacle, but it’s logic is in no way unique. It’s a fantastic demonstration of an inherited power that we must trace back to the transatlantic slave trade. Today’s biggest companies are inheritors of capital accrued from of slave ships, slave traders, and slave insurers. The lynchpin of this inherited power is Whiteness. Whiteness is the collaboration of White Power and White masculinity, it exists in institutions and people, laws, and the media are the agents of these institutions. Whiteness then finds race. Race, an unnatural construct, and capitalism come to co-produce each other.

This Black Friday, we should remember the Black and Brown taken by the capitalistic and racist tactic of U.S. policing. Racism is at the heart of capitalism’s power. (If you’re still too white supremacist to get this, racism means racial discrimination, poverty, lower class exploitation, lack of minority opportunity,“cheap” labor, desperate people, the dispossessed. We are all getting at the same things with a different code.) For many people involved in social justice, we are in an autumn spring. Over 173 communities had actions to protest the murder of Mike Brown and the remorseless and disgusting response of Darren Wilson and White Supremacist organizations such as the KKK and people who are denying that Black Lives Matter. Blackness must be our future. Fighting for Black and Brown Liberation is a tactic of the people, it is the thing furthest away from the deepest part of the incision of capitalism into human history. It’s no wonder that those protesters in Washington DC added a Walmart to their march route.

Racism is at the heart of capitalism’s power.

And who wails, “Black Lives Matter,” or “Justice for Mike Brown,” or “Dignity for Walmart Workers,” or “What do we want? Justice! When do we want it? Now!” It’s not the Walton family, it’s not public safety officials, it’s not even the President of the United States. Who wails this, who cries this out of being terrorized by the past and determined for the future, are poor people, workers, people of color, activists, community leaders, incarcerated people, youth. Do not ask why we are angry and why we are wailing, rather ask why you are not.