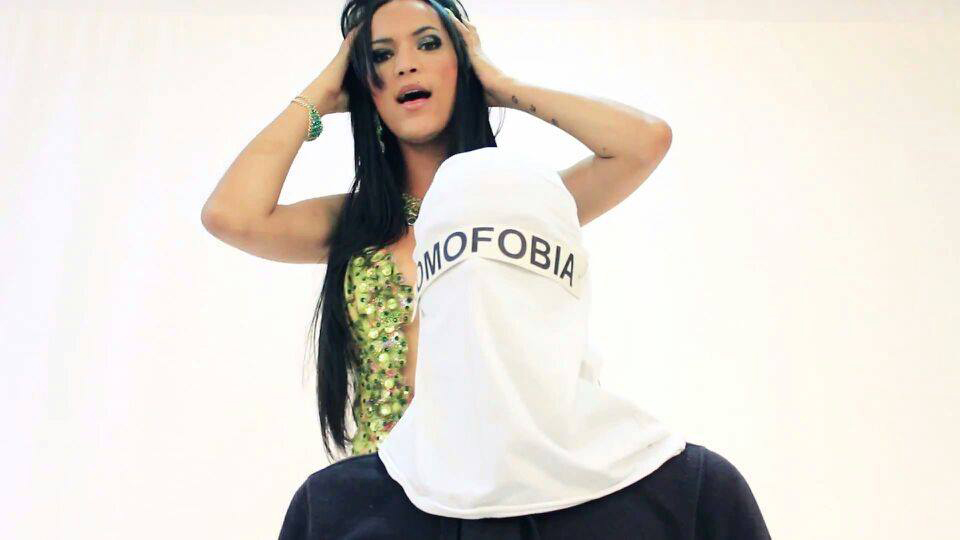 MC Xuxù claimed her place in the Brazilian musical universe with a kiss. “Um Beijo”, her 2013 single, took Rio’s baile funk underground by storm with its vicious, club-ready beat and its stylish video. In the song, Xuxù sends smooches of solidarity to all kinds of people, but the bulk of her kisses go to the trans women of Brazil, a demographic long-oppressed within the tight strictures of the country’s multi-denominational Christian heteronormativity.

A trans woman herself, Xuxù knew that “Um Beijo” would prove controversial, but she also knew that she had a catchy hit that could become an undeniable call for inclusivity in Brazilian music and society. Other similarly danceable tracks, provocative lyrics, and edgy videos followed in the wake of “Um Beijo”, showing Xuxù’s activist vision. This June she released “Quero Ficar”, which borrows the beat to Nicki Minaj’s “Anaconda” to buttress Xuxù’s assertions of sexual desire and personal freedom with Sir Mix-A-Lot’s timeless bassline.

The video for “Quero Ficar” depicts Xuxù as a bride in a lesbian wedding. It’s a marriage equality anthem, and a timely one at that, given the U.S. Supreme Court’s ruling in favor of same-sex marriage occurred just two weeks after Xuxù’s video was released on YouTube. Whether one takes this as prophetic or not, MC Xuxù clearly has her finger on the pulse of the LGBT movements, both in Brazil and internationally. In our interview we delved into Xuxù’s thoughts on the power of music as a force for personal and social change, the tensions within the Brazilian LGBT community, and on the role of religious faith in her life and art.

WINSTON GROMAN: It will soon be the second anniversary of the release of your song “ Um Beijo” [“A Kiss”] Can you reflect on what has changed for you in these two years?

MC XUXÚ: I had tried to be a singer for a while. When I recorded “Um Beijo”, I told my producer that if the song wasn’t a hit, if it didn’t change anything in my career, I would quit: I wouldn’t sing anymore. So, what “Um Beijo” gave me most of all, during these two years, is the willpower to be here now. I already knew that after the success of “Um Beijo” the next song I would make, no matter how catchy or shocking it was, would not be as big. That’s how it is with everything. But my willpower to continue and to make new records, to discover and learn more is what really keeps me up. And, of course, the affection and support of the people.

In that song, you famously give “um beijo pras travesti” [“A kiss to all the travesti”) What has your song’s impact been on the trans community in Brazil? Do you feel that as travesti have gained a bit more acceptance mainstream Brazilian society?

Definitely, it gave us more visibility; and in a good way. Because nowadays, what is in the news is travesti being murdered or being arrested: only bad articles. Then, my song shows up and I’m doing everything that everybody thought a travesti wouldn’t do. I recorded a song about nice things, a song that embraces everyone, a song that highlights travestis. This was an important thing. So I think that it must have had an impact. The main kiss was for us!

Continue reading Winston’s interview with Xuxù over at the Spark Mag.