This Marcus Smart mess is a 'piece of crap' 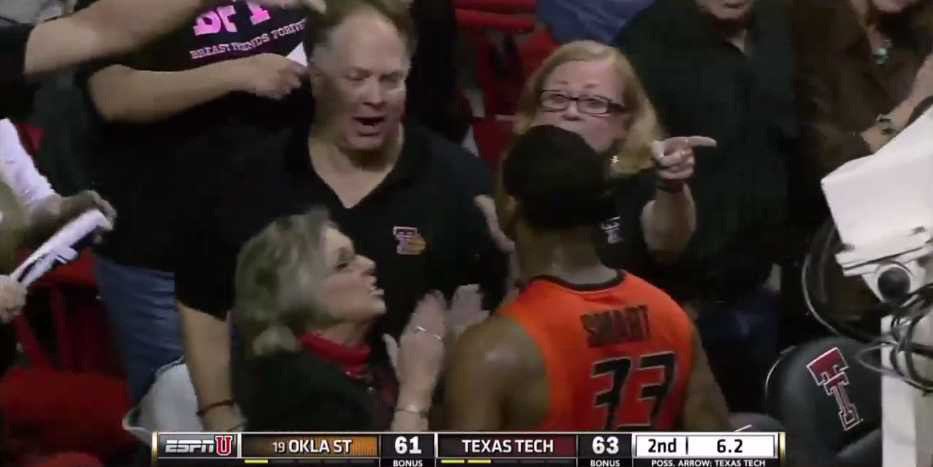 The conversation around college basketball this past weekend has unfortunately focused itself on Oklahoma State basketball star, Marcus Smart. The problem is we're talking more about whether or not Smart was right to push the Texas Tech super fan, Jeff Orr, rather than whether or not Orr is a turkey-necked racist and how far is too far for fan behavior. [Video of altercation at bottom of article.]

Smart, for those not keen on college ball, has now been suspended for three games following his interaction with Orr this past weekend. With time winding down in a close game against Texas Tech, Smart attempted to block a layup and ended up in the first couple of rows behind the basket. Before he was able to make it back to the playing area, Orr yelled something at Smart, which then caused him to retaliate and push Orr.

Initially, there was the assumption that Orr yelled something racially charged at Smart; OSU radio broadcasters said they heard Smart tell his coach he was called the “N-word.” And if we'e being crass, it really isn't hard to imagine a good ol' boy from West Texas spewing some real hatred at a person of color. Texas Tech did their duty, though, and after an “investigation” they revealed Orr called Smart nothing more than a “piece of crap.”

On Twitter, CBS sports analyst, Doug Gottlieb, posted a screengrab of an alleged text conversation with Orr and a mutual friend. Orr says, “Yeah I kinda let my mouth say something I shouldn’t have. I feel bad.” I don't know too many adults that feel real shame—shame enough to text your buddy—over calling someone the dreaded “C-word.” Combining this alleged screengrab with the clip from several years back of him making lewd gestures at former Aggie, Bryan Davis, and the tweets of former college players remembering the vitriol Orr used to yell at them, “piece of crap” sounds like quite the gentle translation.

Now, what we're supposed to do is say Orr shouldn't have said what he said even if it was simply “piece of crap” instead of other more vile suggestions making their way around the internet, but that Smart was definitely wrong to react the way he did. But the funny thing about all these condemnations of Marcus Smart's reaction Saturday night is that this is the kind of reaction that needs, and this is quite obvious, an instigation. So maybe Smart shouldn't have pushed Orr, but let's say that really lightly. Maybe just whisper it, or let's not even talk about it at all because in what arena is a 50-year-old man allowed to verbally abuse a 19-year-old kid? The refrain has been: “It's a basketball game, that's how fans are, you have to rise above it.” But let's be honest, that's fucked up to a degree, right? A student section is one thing (one that does cross the line on occasion), but a grown man degrading a student, especially when that student is down on the ground within arms reach of him after hustling his butt off? I don’t know. A college basketball game, or any athletic contest, is not a Youtube video. You should not be free to yell out whatever hatred possesses you at any moment and be exempt from repercussions.

This would be a great time for the NCAA, that tumorous and mercenary organization, to remind us that Marcus Smart is a student-athlete. That is the ridiculous branding they've tied to every college athlete, the phrase they fall back on when defending lawsuits, screwing over players and families. But if they want to trumpet that tag to get out of paying their money-makers, they would do well to remind their fans that those they are yelling at, those they are trying to engage on a level that is inappropriate in any other setting, are just students. They are not professionals. The NCAA won't, though. They'll continue championing the student-athlete banner when video game money comes up, when jersey sales are contested, but when it comes to ensuring a safe environment for their students to play in they will not be so active to remind fans of the real reason those kids are there. The hand of discipline was quick on Marcus Smart, but the instigator, the one for whom multiple athletes and videos attest over the top interactions have long been habit, there will be no real consequence.

Orr has “voluntarily” decided to not attend any more Texas Tech games, but obviously something else is afoot. A superfan of Orr's caliber doesn't quit halfway through the season without some outside pressure, and that outside pressure is most likely not coming if he just called Smart a “piece of crap.” We're probably never going to know what was really said, and unfortunately the lasting conversation from this past weekend will be that of Marcus Smart's actions. We'd be a lot better, though, if we could take a long look at fan behavior and how we've gotten to the point where after an incident such as this the first and loudest cries of foul are not for the adult who started this whole mess, but the kid, who, during a highly competitive event, was blindsided by a verbal assault.