The NFLPA supports a college players' union and you should too 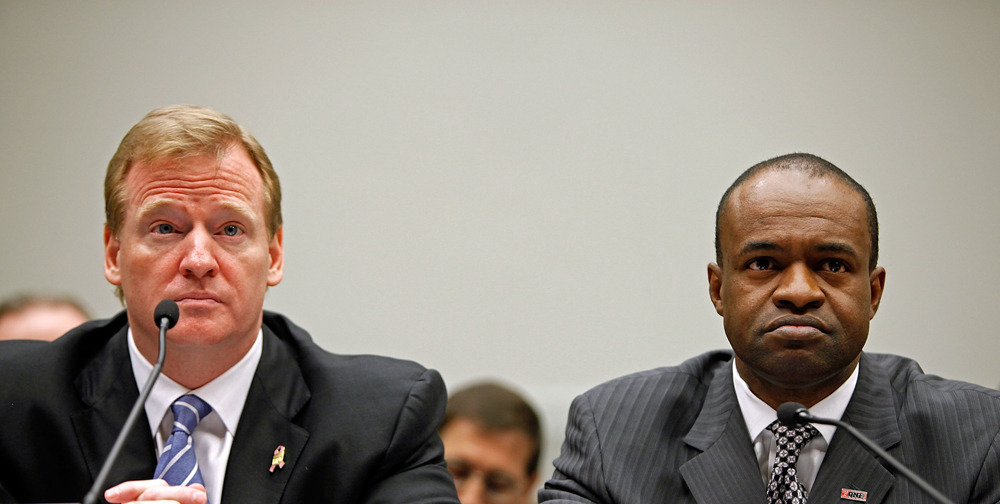 Though real change is still years away, it's always nice when a major figure or group ties its flag to the cause. Yesterday evening, Huffington Post published a column from the head of the NFLPA, DeMaurice Smith, detailing his and the NFLPA's support for a college players' union.

Responding to two op-eds that have recently run in the New York Times and Wall Street Journal from upper level NCAA and university executives, Smith tears down their central argument and, referencing advancements made by the NFLPA, explains why something like College Athletes Players Assocation is necessary:

Our union of professional football players stands firmly behind anyone who demands to be heard as a team. Every NFL player—past, present, and future—owes a debt of gratitude to our founders: Frank Gifford, Don Shula, Sam Huff, and Norm Van Brocklin, who, in 1956, decided that they wanted to negotiate as a team with NFL owners over cleaner clothes, better work rules, better treatment of injuries and better health care. Our collective bargaining agreement today includes better pensions and benefits, safer practices, and injury protections because they fought for and won the ability to bargain and fight as one team.

In the NYT, University of Delaware president, Patrick T. Harker (annual salary of approx $729,329) windbags his way to nearly 1000 words on why we shouldn't pay college athletes:

But the answer is not to organize and essentially turn pro. This would only further lessen the priority on learning. If scholarship athletes already find it hard to balances schoolwork with team commitments, under arrangements that obligate educational opportunity, think how much harder it would be if they were being paid to play.

What's amazing and slimy about that is Harker and the likes are doing the great deflection; they are continuing to argue against paying college athletes when, in concern with the specific issue of unionizing athletes, a salary has not even been discussed by CAPA.

In the more than 100 years since the NCAA was founded, it has not allowed athletes to have a seat at the table to discuss serious issues and therefore has done little to address full medical coverage for injuries sustained, limitations on practice time, scholarship shortfalls and rules to make promised education a reality. These are the real issues for Northwestern's “student athletes,” not the classic bait-and-switch argument that recent columns by university presidents and NCAA officials made regarding whether or not college athletes should get paid. These claims, recently published by The New York Times and The Wall Street Journal with no rebuttals whatsoever, are not true.

While there are several other lawsuits currently being seen regarding money and college athletes, CAPA's want of a union has nothing to do with money. They desire simple things such as better medical protection so perhaps if an athlete becomes paralyzed during an athletic contest he or she doesn't spend the rest of his life in court trying to find ways to pay medical bills; or scholarships that ensure the full cost of attending college is covered so when the dining hall closes and an athlete misses dinner because they were watching game film, he or she doesn't have to stress about asking coach for a taco; or maybe a little reassurance that once their athletic abilities have been used up they will still have a seat in the classroom rather than effectively put to pasture.

With the lawsuits and court cases mounting, the next few years are going to be fun for the NCAA. But if ever you are unsure about which side of the fence you sit on, just remind yourself the term “student athlete” was created in an effort to protect the NCAA from having to pay workmen's compensation for the widow of a student athlete who died playing university football.

PrevPreviousThe Chicago Bulls don't know the meaning of “tank”
NextDrake is ready for the NBA Playoffs. Are you?Next