A dirty Ross and Sanchez prove the Giants are for real 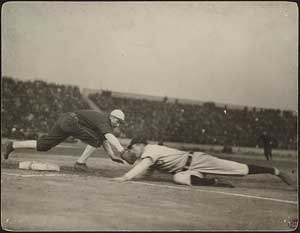 Let me start by stating the people who owned Tim Lincecum and Cliff Lee in my fantasy baseball league didn't win it all. The person who owned Cody Ross and Freddy Sanchez did. I'm still trying to figure out how to spend my winnings.

Before the World Series teams were decided, I predicted the National League would win. I thought this for a couple reasons; the biggest being that the NL is just better than the AL these days. That's right, I said it. Sorry Yankees and Red Sox fans, but the future lies with teams like the Cincinnati Reds, San Francisco Giants, San Diego Padres and Arizona Diamondbacks. Hell, even the now should belong to the Phillies, but they're from Philadelphia, so they're only allowed to win once every 28 years. The All-Star game was no fluke, the NL is here for the imminent future.

The second, and main, reason I predicted an NL World Series victory was the management. Take your pick, but either Bruce Bochy or Charlie Manuel would coach circles around Joe Girardi and Ron Washington. Yeah, I know Girardi beat Manuel last year, but that was a matter of the talent on his team, not his questionable managerial skills. Talent, mind you, that is getting very old by baseball standards. And now that the teams have been decided, I still feel that way. Ron Washington may turn out to be a great manager, but Bruce Bochy is one of the best, most underrated managers in all of baseball, and is the main reason I would put my money on the Giants to win this World Series.

But those WERE my reasons. My new reason revolves around two journeymen who have been instrumental to every successful fantasy team I've every had — Cody Ross and Freddy Sanchez. It may sound like a cliché, but you're only as good as your weakest player and the makeup of every champion lies in the middle of their lineup. Neither of these players are weak by any stretch — Sanchez is a career .298 hitter, Ross averages 22 home runs a season — but no one expected either of them to carry a team deep into the playoffs. In fact, the combined eight teams they've played for outnumber the World Series games they've played in eight-to-one. That one being last night's game.

Yet in that one game, Freddy Sanchez made history with three doubles against one of the best post season pitchers of all time, leading the Giants to an important game one victory. Cody Ross only went 1 for 5, but he had his 9th RBI of this 2010 post season. The series is far from over, but like life, baseball is filled with role players, and the Giants have two of the best.

Before wrapping up, I'd like to make three quick NBA shout-outs. The first two go out to the NY Knicks and Brooklyn Nets, who both, for the first time in my 10-years living in Brooklyn, look like they have a bright future ahead of them. The third goes out to the Cleveland Cavaliers, who I predicted would have a worse season the LeBron and the Heat, but one game in, have a 1000-percent better record. All three teams are 1-0 to start the season.

A secondary shout-out to Rajon Rondo for rocking the upside down headband. Whoever said music and sports don't mix doesn't know how punk it is to have your fashion banned by the league.