A Brief History of Fiasco 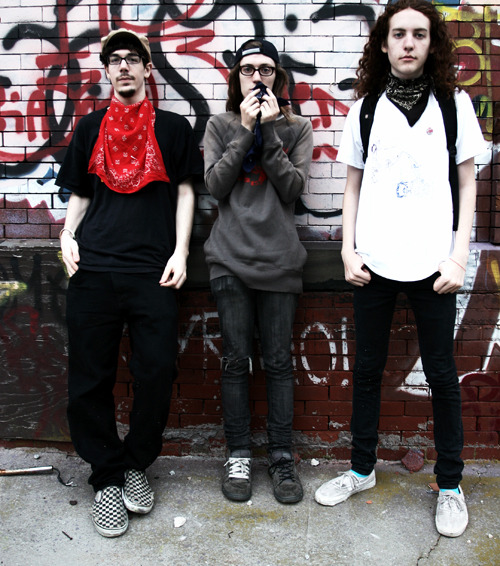 A) Like a slap in the face, only more complex

B) A sudden and violent collapse

D) A wood-covered bottle of wine?

Well, what do you think?

Brooklyn’s Fiasco might be kids, but don’t call them kid-core. Though they were dubbed “the kingpins of the Park Slope kid-rock scene” by an out-of-context quote in a New York Times article, Brooklyn trio Fiasco has always looked beyond that (possibly imaginary) genre to more tasteful and enduring things. A fixture on the Todd P circuit for over a year, Jonathan Edelstein, Lucian Buscemi and Julian Bennett-Holmes play fast, loud compositions whose complexity belies the band members’ tender average age of 17. When asked to pick a genre, they propose and discard several options, including “math punk” and “screamy mathy thrashy core” before admitting that they don’t really fit into one. They are fans of, and, increasingly, colleagues with bands like Aa and High Places, bands which bear little similarity to one another besides the fact that they’re all doing something interesting. Lucian cites Ninjasonik, who wants to remix one of their songs, as an example.

“Our music has nothing in common with Ninjasonik,” he says, “but we still want to play a show with them. No one’s gonna be like ‘oh they’re mixing a punk band and a rap group, that sucks’ cause they’re all into different kinds of music. He appreciates our math-punk, and we appreciate the fact that he’s a crazy rapper.”

Fiasco has drawn comparisons to such rock greats as Sonic Youth, Pavement, and Slint. This would be an achievement for anyone but it’s even more remarkable considering that, as the contents of MTV and the continued existence of Korn suggest, most teenagers in the post-grunge era have abysmal taste. Luckily, the kids in Fiasco have had the unique advantage of growing up in New York surrounded by cool older people.

Lucian credits his father, Steve Buscemi, with introducing him to The Clash and the Ramones. They also admit to having been huge fans of Rage Against The Machine in their younger years; they got turned onto Minor Threat via a cover album by the anarchist mall rockers (Renegades, 2000), and then, via Minor Threat, to the wonderful world of punk. “If we really loved like, Korn instead of Rage, and we’d never listened to that cover album, and we would’ve become, like, thrash metal, which would still be cool, just different,” muses Julian. Lucian is humble: “We also have influences that suck but you just don’t hear them… I still have a soft place for Korn.” (And, they tell me, Green Day and Blink-182.)

Hidden bad influences or not (if you can’t hear Tom DeLonge, does he finally go away?), Fiasco has come a long way in the three short years since it formed as a punk cover band. The guys recently released Native Canadians on Impose Records. They’ve already performed in locales as diverse as Austin and Sarajevo, and hope to buy a van and go on tour once they get their driver’s licenses.