An interview with Meg White's breasts 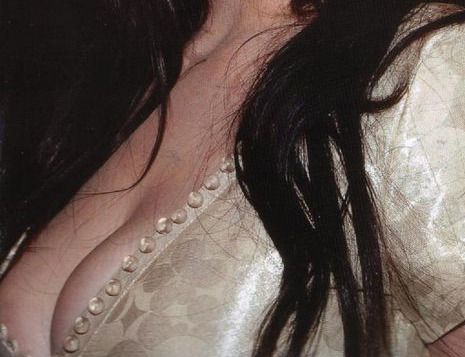 For the first time ever, in a rare and exclusive phone interview with Gordon Downs, Meg White’s breasts reveal what life is like in-between the red and white rock n’ roll lifestyle of the White Stripes.

Gordon Downs: Thanks for doing this, how’s everything going for you?

Meg White's Breasts: I’m alright. Meg’s asleep so we gots a few minutes so let’s do this Jordan.

C’mon child we ain’t got no time for no games.

You’re constantly hanging in front of Meg while she’s drumming, do you ever feel that the percussion takes a backseat to the cleavage or vice versa?

Have you heard the records? Them drums ain’t nothin’ but Swiss cheese.

I mean, I could play her parts. Once, at the 930 in D.C., she was sick, reals bad, (inaudible) was just sloppy all night. Jack was pissed well. Eventually I just grabbed a drum stick and took over the snare. Jack jumped round’ front of the drums a lil’ bit more than usual to cover up the fact that Meg’s left titty was keeping rhythm.

When do you think it was that people really started to notice you?

It was just indie-kid and club staff that knew about us. After V2, everybody was going checking us out. Soccer moms, NASCAR dads, cheerleaders, frat boys! Frat boys was the worst! One of the main reasons they don’t do no in-stores where State Universities is at.

Wow, is that true?

I dunno motherfucker? I’m just some white-bitches titties! This is why she don’t do no interviews.

Because of ill prepared questions?

That and most journalists think that just because Meg is real sweet and quiet that they got a chance with us. That and most female journalists always be trying to sneak-a-peek. That ain’t cool. We don’t roll like that Jordan. We likes men.

Well then listen up Jordan! Remember when Jack beat the crap out of that white boy from the Von Bodies? That was because of us. Motherfuckers be trying to jerk off on us and shit!?! Oh hell no! Meg pushed that white boy off us and booked it! Fool was served up in less than a week. You best protect ya neck Jordan.

Listen child, she’s waking up and is fit to start buggin’ if she find me on her cell again.

Can I ask one last question?

Naw man, we gots to cut.

Do Meg White’s breasts have a message for the children?