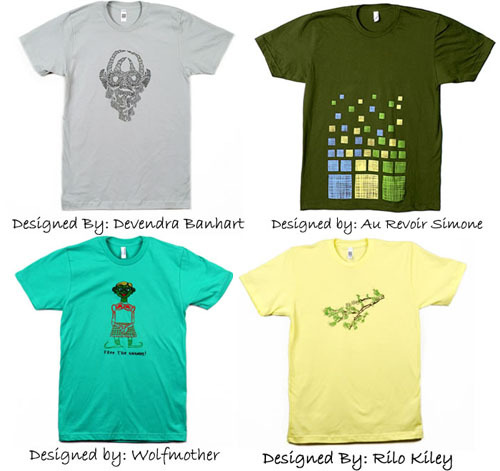 You give t-shirts to people in Africa? I don't get it. I want one too.

No, that’s not what we do. We collaborate with bands and musicians to raise money for various charities. The band contributes a design, we print them onto t-shirts, and all of the money which is raised goes to charity. Each of the bands selected their own charity. They are available for men and women sizes anywhere in the world. So if you want one – go to yellowbirdproject.com and pay $25 for your very own.

Rilo Kiley chose to gave to the Elliott Smith Fund. Could you walk through some of the charities and organizations that Yellow Bird t-shirts gives to?

What I like most about this project is the fact that bands tend to choose charities which are personal to them. For instance, Rilo Kiley chose to support the Elliott Smith Memorial Fund, which is a fund that Elliott’s sister Ashley set up after his passing. She told me that one of the things Elliott always wanted to do was to support abused children, so his sister set up this fund in his name, which goes to Free Arts for Abused Children. Since each of the members of Rilo Kiley were good friends with Elliott, they were really excited about being able to help raise money for his fund.

Devendra Banhart was keen to support a children’s charity, and so he chose the Teenage Cancer Trust, which is a relatively small UK based charity.

Shara Worden from My Brightest Diamond chose to allocate the profits from the sale of her t-shirt to Road Recovery, which is a charity that helps musicians who are recovering substance abuse addicts. She feels close to the cause because she has some friends who are on the executive board.

Then you have Joseph Arthur, who has already done a lot to raise money for Gulf Coast relief, including a collaboration LP where he and Michael Stipe covered his song “In the Sun”.

Have any of these bands approached you with specific charities in mind or does the process usually go in the opposite direction, where you approach bands?

Most of the time the artist does have a charity in mind. Usually it’s a charity which they’ve supported in the past, or one which they’ve always wanted to support. Or sometimes it’s just a cause that’s close to their heart.

What percentage of purchase goes to the charities in mind?

100% of the profits we make from each t-shirt, goes to the charity of the artists’ choice.

Do you give any direction for these designs? some of them are funny. I like “Free the Gnomes“. Did Wolfmother ever let you know what that's about? Wikipedia doesn't explain it too well but it sounds like a funny story:

During an interview in March 2006, Andrew and Myles created a 'Free the Gnomes!' design using the 'consequences' method, where each couldn't see what the other had drawn

Some of the designs are expertly drawn, and others work well on a more basic level. The ironic thing about the Wolfmother design, is that some of the band members are actually graphic design experts. They produced their exquisite Wolfmother LP artwork on their own.

But yeah, all of the t-shirts do sort of tell a story. I asked Robbie, the guitarist, keyboardist and backup vocalist from CYHSY if the crying man on the airplane had any significance, and he told me that it was the way they feel before they go on tour.

Which are the most popular t-shirts?

So far, leading the race is Devendra Banhart, followed by Rilo Kiley at a close second.

Which t-shirts are the misunderstood, undersold masterpieces of the bunch?

I guess to a certain extent, the popularity of the t-shirt is related to the popularity of the band. So most of our band t-shirts sell well in proportion to the artist’s fan bases. But then again, it doesn’t always work that way. Personally I love all of our designs, and I think that they are all appreciated. I guess it just depends if people measure the quality of the t-shirt based on its aesthetic value, or on how much you like the musicians who produced it.

Do you get to tour the t-shirts with the bands?

We don’t get to tour with the bands, but occasionally we do make appearances with them. We’ve sold t-shirts at a My Brightest Diamond show in Montreal, and we also sold t-shirts at the Osheaga Festival which featured CYHSY and Joseph Arthur.

Have your t-shirts been getting any blog love?

Yes, definitely. The blogging community has been really helpful in getting the word out. We’ve been featured in some big blogs like Stereogum, Pitchforkmedia, and also some really nifty smaller blogs which are more niche. In a way, we sort of depend on that type of publicity, which engages the online community.

How does being a Canadian charity work? You're a non profit sort of deal?

Well we’re not actually a charity ourselves. In effect, we raise money for other charities. We are sort of a non-profit fundraising initiative, a mechanism which bridges people together with musicians and charities.

Do you feel lonely as an independent music charity organization?

Sometimes. But at least this enables us to continue to come up with creative ways to expand our initiative, on our own terms. Plus, we have a lot of lonely gnomes to keep us company.

A little bit! But, I think it’s a great thing, when influential people take it upon themselves to use their popularity to promote worthwhile causes. But yeah, I can imagine having YBP sponsor a Super Bowl halftime show featuring an array of YBP bands and musicians. That would be pretty cool.

Or have you found punk rock utopia somewhere deep in the Rockies and you're not coming out ever again? Somewhere in between?

We’re based in Montreal Canada, but we function as a global initiative, which is online-based. I really don’t want to isolate ourselves in any way, and I feel like the only way for this to work best would be to try and make a difference all around the world, by spreading the word about good music, raising awareness for certain charity organizations, and of course being able to raise money for them as well. We’ve included bands from Montreal, Australia, Scotland, New York City, and we’ve sold t-shirts to people in those places, and other places as far away as Japan, Singapore, Israel, and others. So it’s really a global effort, and everyone who is involved is in it together.

What do you think of the “green” trend?

I’m happy with the idea that charity is becoming fashionable. It’s about time! If anything should become fashionable, and mainstream, then it should be charity. I have no objection to being good to people, and being good to our environment. King Creosote’s YBP tee was design to raise money for Greenpeace so we’re involved in some way. I hope that in the future we can extend ourselves furthur into doing more to help environmental charities.

Similarly, what do you think of the work other charities based around independent music are doing? Can you mention a few you like?

We’ve recently come across a fantastic charity initiative called the Glass Casters Union. They assemble designs from indie bands like Of Montreal, and Band of Horses, and they print them onto moulded Christmas ornaments, which are made of recycled glass. All profits from the sale of these ornaments go back to their local community in the form of assistance for homeless and low-income people through emergency services, housing, jobs, training, and other charitable endeavors. We’re planning to do some kind of collaboration together, so keep visiting yellowbirdproject.com and stay stuned!