At home with OSHUN 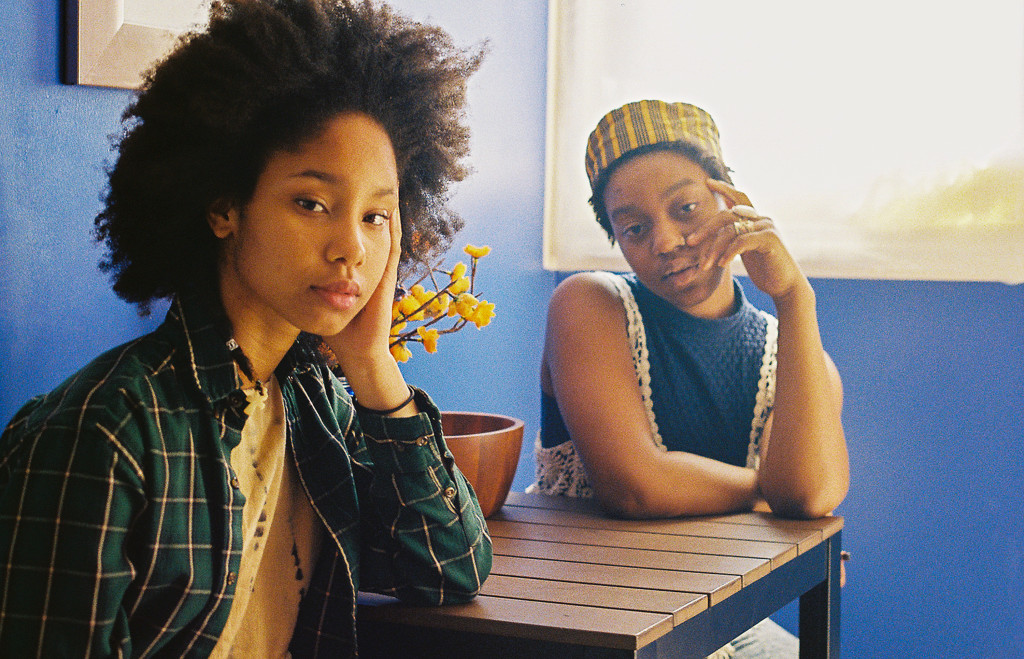 It’s an early April morning in Brooklyn, one of the first bright and warm Spring days after the unrelenting winter. The air is palpably rejuvenating, the type of weather that inspires possibility, excitement, and exploration. Niambi Sala and Thandiwe, a/k/a the New York duo OSHUN, fully reflect that energy, as the two girls welcome us into Niambi’s apartment with warm hugs. Tracks ranging from Sade to Fetty Wap blare through the pad; each room is adorned with different colored walls and artwork.

I soon learned such variance is to be expected of the versatile, unabashedly Afrocentric DC-area transplants who released their debut album, ASASE YAA, on Earth Day. Both members of the band are from the DMV (that means DC, Maryland, Virginia) and shared the same friends back home, but didn’t meet until an orientation for an NYU scholarship program. They quickly developed an artistic kinship that combined their childhood musical influences into an intriguing fusion of jazz-inflected boombap, trip-hop and neo-soul elements.

Named after the Yoruba Orisha of water and love, OSHUN aims to radiate the beauty of the motherland with empowering lyrics, but do it with youthfulness and calmness that are refreshing in a genre prone to preaching. They displayed immense knowledge of self in our interview, but won’t force it down your throat. They’re too busy enjoying life to do such.

Coming up, what were your musical inspirations?

Niambi: My mom, Andaiye, is a neo-soul, neo-funk, jazz singer. So I always grew up listening to my mom’s music, and listening to what she listened to. I was obsessed with Lauryn Hill. I still am. My parents are young, so my Dad was playing Nas, Kanye, Jay-Z. My grandparents and my family are family-oriented, so we all come together frequently and listen to music and dance.

Thandiwe: The people who influenced my music tastes were my mom, dad and brother. My dad used to listen to jazz. The first music I ever heard was probably jazz — some Coltrane, Miles Davis, Herbie Hancock. My mom had India Arie’s The Truth and would play it like every day for two years. My brother’s ten years older, so when I was 3, he was 13 listening to Slim Shady. He’d be like, “you gotta know Reasonable Doubt!” I got my hip-hop from my Brother, so I guess a mix of the neo-soul, hip-hop and jazz.

At what point did you realize, “we should do some music together”?

Niambi: Thandiwe was DJing in high school, and I knew she produced. I was in school for music, so she knew I did music.

Thandiwe: She sang, and would make dope songs. I was kind of shy with my stuff. I’d be like, [meekly] “I made a beat tape.”

Niambi: I didnt have anything out, I was just singing on campus. But one day, I had left to go home, it was three of us, really tight. Me, Thandi and our producer Proda. I left to go back to DC for a day or two and I came back and they were like “Yo, we made this song”, and I was like OK, thinking they collaborated on a beat. Then it was a beat and Thandi singing on it. I was like, “wait a minute, you sing?” That’s what I was waiting for! We were singing all the time. We would be in the dance studio in our building, and we would just sit down, make beats on the floor singing songs. One day we said, “:et’s start a group, let’s just do it!”

At what point did you decide to incorporate the Goddess Trilogy?

Thandiwe: Niambi was raised in a Pan-African community, so she grew up with the Goddesses and Gods being prevalent in her life. For me, I grew up in a Christian home, and I knew about them. I took an intro class (for my Africana Studies major) and there was a whole section on the Orishas. My professor introduced Oshun, and I was taken by her. Then, I started talking to Niambi and we started doing research. Oshun was very present in our energy. When it came to figuring out a name it was a natural decision.

Along with radiating the energy musically, do you feel like you have agency to raise awareness about the ancestors and the Yoruba tribe?

Thandiwe: Music is probably one of the most powerful ways to speak to people. You can be an orator, you can do a speech, but once you add those sound waves that are pleasing to the ear … it hits you more. If Malcolm X was spitting over a Dilla beat?!

Niambi: It’s beyond us. There are different deities and all these groups coming out and promoting it. I’ve seen mad girls on Twitter with their names being Oshun now. Two years ago that wasn’t even happening. Not even saying that’s just us, but now it’s a shift, we’re getting closer to the Sun.

Different music brings out different vibes. How does it feel to radiate positive energy towards the crowds you perform for?

Niambi: We both find ourselves to be Priestesses. Being healers. In our human vessels, we both feel our purpose is to heal, to uplift the people. To do that through music is validation for life.

There’s positivity in everything. Even in the darkest shadow, there’s light somewhere. You don’t necessarily dismiss something just because it’s dark. You let that light illuminate.

Your Facebook profile says your Genre is “floetry meets Lauryn Hill meets Chief Keef.” Can you explain the dynamic of pulling from a diverse range of inspirations?

Thandiwe: When it comes to music, and what we like, it’s anything that has positive vibrations. That transcends genre. Even if Fetty Wap is talking about cooking drugs in the kitchen with his girlfriend, the song goes hard. It sounds good, it feels good. We’re just able to take the vibrations as an expression of an interpretation.

Niambi: There’s positivity in everything. Even in the darkest shadow, there’s light somewhere. You don’t necessarily dismiss something just because it’s dark. You let that light illuminate.

What’s the significance of your debut album being titled ASASE YAA?

Niambi: Asase Ya is a term for Mother Earth. Asase Ya, the project is in honor of Mother Earth, and respecting, loving, and appreciating the land in which we inhabit. She’s not gonna take care of us if we don’t take care of her. [It’s also about] Black Women as earth, uplifting and re-instilling certain principles and ideas.

The songs are very conceptual. The order is very conceptual. Our goal with this project is so the Black woman or anybody can transcend. We’re stuck in mental slavery. Throughout the project we go into liberation, freeing yourself and realizing who you are.

Niambi: We got some acapella Orisha songs, Negro spirituals, some trip-hop, trap shit. We got some smooth, “I’m ’bout to smoke a spliff with some honey” shit.

Thandiwe: We got some boombap! The vibes are very feminine, but strong … it pushes through.

As Black Women, where do you think the line is drawn between pandering to misogyny and owning your individuality and sexuality?

Niambi: [Some people] are so concerned with telling someone how they have to live, and not respecting the fact that we’re all here having a human experience. Part of the human experience is free will, and literally experiencing it how you want to. When they’re trying to conform you it’s because they have that issue within themselves.

Thandiwe: Once you see the beauty in yourself you kind of don’t even care what other people think. Let them be mad that they’re not me.

Niambi: They might be marginalized but they’re definitely not unrelated. There’s kind of been a worldwide war declared on us, so you see it manifesting more in certain places. It’s so blatant here, but it’s no coincidence that Black people everywhere have been struggling. [Our survival is] a testament to how strong we are because they’ve been trying to kill us off for years.

Thandiwe: We have this shared experience of oppression but it’s been different for these different areas. It definitely was horrible in the Caribbean. It’s definitely been horrible on the continent. I’m one of the only straight up African-American people I know. Everybody that I really have been close with have had some Caribbean or know what part of the Continent they’re from. Both my parents are from the South, from American slavery.

Thandiwe: Yeah, Negro, I feel like it’s different in America. When you go to the Caribbean, even though those were colonies it’s still a majority Black place. You go to Jamaica, you know you’re gonna see Black people, but in America it’s like the white man’s country. That changes everything.

There are definitely some social issues in the Caribbean and Africa because of colorism and our people clashing with each other. The important thing to recognize about that is it’s no different than America because those things are happening because they were conditioned to think that way, they were taught and oppressed so much that they were pushed to oppose each other … Once you separate the people it’s harder for them to come together.

PrevPreviousMarie Davidson does not own a computer
Next4/20 in DenverNext