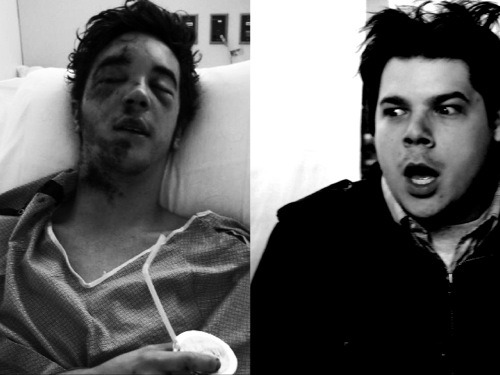 About four years ago, I, William Cody Watson, met Jon Hency. I was living in northeast Arkansas, where I still reside, and he was in northwest Arkansas. We were both playing in shitty “weird” bands, and met through that. I would end up making the five hour trip to his hometown in Fayetteville over the years to drink Old Style, jam, talk for hours about psychedelic and noise music, and watch dumb DVDs. We ended up being bros-4-life, going on tour, and recording a bunch of different music.

Around 2007, Jon decided to do this small cassette-only outfit called Bathetic. He wasn't worried about editions or getting paid, he just wanted to put out a handful of weird tapes for some of his buddies. Tapes were dubbed, inserts were screenprinted, but most of the people he worked with were reclusive weirdos hidden in the hills of Arkansas, so it didn't quite work out. He shitcanned the idea, but kept it milling around in his brain.

In 2008, Jon moved to Chicago and I talked him into rebooting Bathetic. This time we would try to find artists who we didn't know well, but completely respected. Luckily, the Jeans Wilder & A Gal split kinda fell into our laps right at the get-go, and that really worked out. We were able to put something out, as our first piece item, that would be relevant.

I guess the fact that I'm here in Arkansas and Jon is in Chicago makes things a bit awkward, but I think it offers the label an interesting disposition. We pretty much do everything ourselves, with both Jon and I talking to artists and getting them on board for releases, while I do most of the artwork and Jon dubs every cassette in his apartment.

We're working on a tape for Cough Cool called Buy Some Dust that will slay. It sounds like Deep Sht on shit beer mixed with Chrome or something. We did some extremely limited Bathetic tees that are the ultimate-fabness and you'll look ultra-fresh in one. We're also doing a split cassette for Dead Luke and his friend Stacian.

Also, there's some other things lined up: more Pink Priest, a tape from Sparkling Wide Pressure (amazing, eclectic homegrown atmospherics), something from Secret Tones (insane goth-influenced new wave from Cali), a tape from the Cough Cool-related band Nude Beach (solid and chill, the name says it all), and something from Among The Bones (UK-based epic drone). That's just the tip, there's a lot more going behind the scenes.

The biggest thing in the works is this giant summer bummer-themed compilation we're putting together… The line-up alone on this piece will probably force us to have to make a thousand copies to meet the demand: Best Coast, Julian Lynch, and Dirty Beaches, amongst others. It's not finished, but the working title is Summer-Bummer-Get-Laid-Get Wasted-Summer-Mixtape. We're pretty stoked on it, it's gonna be like five bones, and jam packed full of amazing music. Other than that, we'll see how the year pans out.