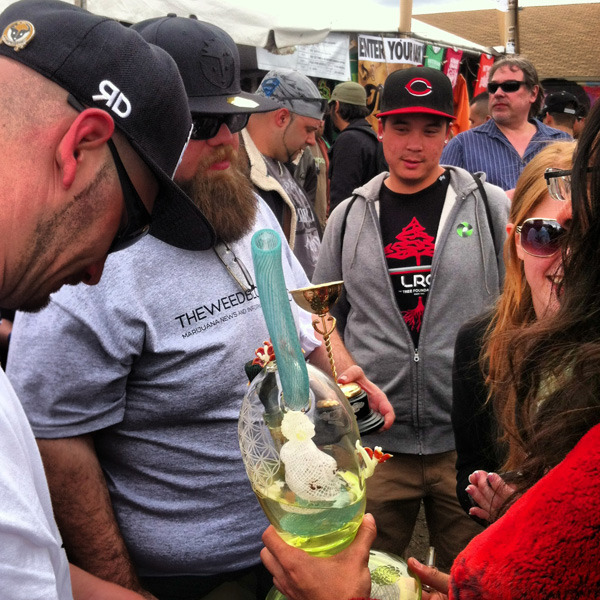 Boston’s on lockdown and I’m in a cab headed south on I-225 toward southeast Denver with two guys from Kansas City. Swizz, with a beard, a flat-brim cap, and thick black shades hands me an airplane bottle of Remy Martin V.S.O.P. I got up with them back at Denver International to share a ride. There’s no quick service to downtown from the airport and the cost for expedited travel is a steep 55 dollars. You’ve gotta buddy up to get around in a town like this, and it sure as hell ain’t too hard when you’ve got the backdrop of a giant pot party on your side. Swizz and his traveling bud, a glassblower, are in town for the same reason as Impose: to witness America’s inaugural Cannabis Cup.

It’s April 19 and the cabbie is cluing us in on what he has gathered from reports broadcast over the ol' FM. Police are in pursuit of two suspects, Chechen brothers, linked to the Boston Marathon bombings earlier that week. Swizz asks the cabbie if we can smoke. Knowing it will boost his tip, he tells us to roll down the windows. Smart move, cab man. Swizz and his bud are headed toward the La Quinta Inn off S Colorado Blvd. My destination is about four miles west off the intersection of S Broadway and E Alameda in the Baker neighborhood. He says his friends have a hotel full of good bud. They’re going to get stoned immediately and try to catch Raekwon at some joint downtown later that afternoon. He asks for my phone number. I tell him to get at me if he catches wind of anything wild. That would be the last time I communicated with Swizz. The cabbie gives me shit for the extended leg, but passes me his card because I tell ’em I’ll be relying on cabs and public transportation for the remainder of the weekend. That’s the last I’ll have to deal with a cabbie this weekend. I don’t know that yet. I don’t really know too much of anything yet. I don’t even know the guy who’s putting me up for the weekend. I won’t meet Zane Schrock till after he gets off of work, which may be four hours or six hours from now. My phone is still on EST and I haven’t slept in over a day.

Zane Schrock is a friend of a friend. A short guy about 5-foot-3 with reddish-brown hair and a beard, a guru he’s been studying under for seven years and one hell of a record collection. He leaves the door to his apartment open for me. It’s one of four in the house and sits on the first floor in the back. I see a bum defecating into a porcelain toilet that’s set next to a dumpster in the alley outside of his door. Can’t blame him, he was using the damn thing proper. I crash on Zane’s couch. I remove a few pillows covered with Hindu deities to get comfortable. After I notice a few Om symbols in the tapestries, a sitar, and an acoustic guitar with a swastika sticker the pillows make a lot more sense. I still have no idea who this dude is, but there’s a bong on one of his bookshelves, so I’m not too worried.

I’m there alone. The assigned photographer’s grandmother passed a few days before the trip so he couldn’t make it. “Instead of the Cannabis Cup, I spent the weekend watching my parents cry,” he tells me later. I get up from the couch in search of disposable cameras and a bite to eat on S Broadway. Past some dilapidated porn houses there’s a drug store a few blocks north stocked with everything a traveler would need outside of booze. You’ve got to go to a liquor store for that in Colorado. No worries, there’s one right next to the coffee shop a block away from Zane’s flat. I catch a slice at Famous Pizza on my way back. The cashier is an endearingly rude older lady. Maybe Greek, maybe Italian. I don’t think about it too much and take a seat in front of the flat screen looping an interview with the Tsarnaev brothers’—the suspects in the Boston bombing—uncle, Ruslan Tsarni. “My family has nothing to do with that family,” Tsarni expresses emphatically to the budding microphones surrounding his neck. The questions continue to little effect. A purple reporter with gold rim glasses from some NBC affiliate continues to prod the mike closer and closer to Tsarni’s mouth. It’s uncomfortable to watch. The news ticker scrolling below the interview lets me know the older brother, Tamerlan Tsarnaev, 26, is dead and the younger suspect, Dzhokhar Tsarnaev, 19, is still at large. I throw my trash away and head back to the pad to meet Zane for the first time.

Zane smokes, drinks, and listens to good music. He tells me that he recently broke up with a long-term girlfriend and feels like he missed out on benders earlier in his 20s so he’s taking full advantage now. He works for a company that puts together audio books for the blind, which is a nine-to-five deal, so he’s wide open for the rest of the weekend. We drink a couple of beers and decide on dinner, some Mexican joint northwest of his place. He introduces me to what will become our only mode of transportation throughout my stay. A shit brown ’89 LTD Crown Victoria station wagon. A beaut fit with peeling paint, a CD deck, and a V-8 Ford Windsor rev that’ll have heads turnin’ all weekend. We light a smoke, buckle into the wagon and jump onto I-25 towards Los Malcajetes Taqueria in the Barnum neighborhood. The beers are cheap; we’re talking Jefferson Starship, Thin Lizzy, and Bob Seger; and we are the only people in the place speaking English. I’m supposed to attend a pre-Cup event featuring Snoop Lion in a couple hours, so we head back to Zane’s place.

After a couple beers and my first introduction to the Swedish power pop band Rottweiler and the A-side of Jefferson Starship’s Freedom at Point Zero, Zane offers me a lift to the Fillmore Auditorium situated downtown off E Colfax. He says he’s going to a party next to Denver’s notorious jump Rhinoceropolis and to hit him up once I’m done at the Fillmore. I get a text update from a friend in Boston during the ride:

“ate some rice now drinking skunked beers. was NOT prepared for all of Boston to shut down over some Russian dudes.”

Zane drops me in front of the marquee that reads: HIGH TIMES PRESENTS SNOOP LION REINCARNATED WITH SPECIAL GUESTS 4/19. There’s a long line outside wrapped clear around the corner of E 16th. The queue is rife with smoke. It’s illegal to sell grass and get down in public, but that shit’s everywhere. I skip the line, shake a hand and enter the Fillmore. It’s a giant ballroom with chandeliers hung over the wooden dance floor. People are taking full liberty with the recent legalization granted by the passing of Amendment 64. The ballroom’s never seen the likes of two thousand stoners at one time. I grab a beer and head outside to smoke a cigarette. I see a guy drop a smoke a couple times before securing it in his mouth. I offer to light it for him. “I’m home,” he mutters through incessant giggling and teeth-sucking. “I’ve got my stuff and my dog back at my old place [in Ft. Collins], but I’m staying.” He’s part of Denver’s new transplant population—those who are going to stay and figure out jobs and living conditions once the Cup is over. The entertainment tonight consists of Adam Tosh (Peter Tosh’s son), a set by Dead Prez and an assumed performance by Snoop Lion. Tosh comes out playing some of his father’s well-known cuts like “Equal Rights” and “Legalize It”—a more economical equivalent to Stephen Marley playing “Get Up Stand Up” or “Kaya.” Tosh stops on one of the bars to adjust the verse: “Legaliz-ed It.” Cypress Hill’s “I Wanna Get High” pulses out of the soundsystem. There’s an excuse to light up in every bend of entertainment. Using the john won’t even stop them, you can light up while you’re taking a piss too. People lumber about the decks above the dance floor, bumping into one another. Denver will have to get used to the army of ambling zombies, they’re here all weekend. Stic.man and M-1 of Dead Prez take the stage. They’re not convinced the audience even knows who they are until the play 2000’s wobbly banger “Hip-Hop.” The floor fills up as Dead Prez finishes their set. Everyone wants to get close for Snoop. Three dudes smoking an L pass it my way. They say it’s some special strain, but I can’t make out the words. Snoop enters the picture a few minutes before midnight and starts to chain smoke blunts. A man in a bear suit dances around the stage while Snoop’s hype man tosses about throwing blunts to the spectators closest to the action. Snoop’s just DJing. He cues up Kid Cudi’s “Day N Nite” and commences America’s first legal 4/20 at midnight. “The lonely stoner seems to free his mind at night/He’s all alone, some things will never change…” An oddly somber choice to kick off such a celebration. Certainly a fitting selection for a midnight ride, but kind of a bummer when you’re celebrating new freedom with a couple thousand other people for the first time. Snoop continues his laptop set, so I get out of there to meet up with Zane down the street at 420 E Colfax; a bar called Nob Hill. No Snoop Lion for me tonight. Too bad, it would’ve been cool if he would’ve dropped the Sleng Teng on “Fruit Juice.”

Nob Hill looks like it’s been untouched for fifty years. A seedy dive. No one’s getting laid in here, just good and drunk. It’s too bright in Nob Hill for sneaky shit. Bob Seger’s “Night Moves” plays in the background upon my entrance. I hug Zane, whom I still don’t even really know, and head over to the black matting cupping the edge of the oval bar in the center of the space. “Started humming a song from 1962/Ain’t it funny how the night moves.” Old taps, cheap drinks, and true bar flies decorate the rim. I tell Zane I’m a little shaky from the blunt earlier. He glares at me, “Don’t be a pussy, it’s Denver weed. You’re just not used to it.” It’s a slow process building up tolerance in the Mile High City. A tolerance I won’t get used to until tomorrow, late tomorrow. I get a shot and a beer before Zane introduces me to a couple of his friends. Dahlia Willis is a documentarian and Sakari Chelsea is well traveled and unemployed. Dahlia, reserved, sits quietly sipping her drink in a booth wearing a yellow sport coat. She rolls up her sleeves to reveal the words “HUGE SLUT” written on her forearms. Sakari, sporting a black jacket with a Four Corners patch sewn to the back, dances to the classics off the jukebox. According to Zane, “She’s the girl who remembers stuff like Mungo Jerry being the band behind ‘In the Summertime.’” A jukebox wizard. Give her three bucks and she’ll have the joint jumping for half an hour. I find out quickly it’s cheap to drink in Denver—or maybe it’s just ridiculously expensive to drink in New York. I don’t think about it too much. We get bombed, wax drunk philosophy, dance, close down the bar, part ways with the girls, get back in the Crown Vic, and return to Zane’s pad in one piece.