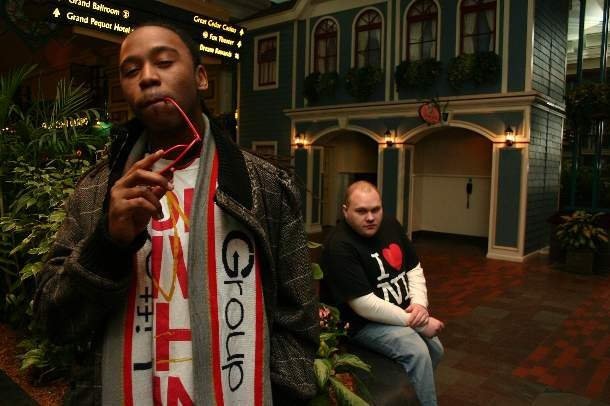 Cool-Aide's indulgent party album Flavor Ade closed up 2009 with a hybrid that celebrates '89, '99 and a bright future. I talked to both Icon the Mic King and Chum of Cool-Aide about the Flavor Ade album, b-movies, pasta, Eli
Porter, and much more.

What was the best part of the
nineties for you guys?

CHUM: Not
giving a shit, the lack of not having responsibilities to do whatever you want
and just get grounded. I got a kid and if I were to do that now, I’d go to to
jail. When you’re a kid there’s no such thing as a DUI.

Everything
about the nineties was different there’s, something about it, you got it keep
it moving.

Icon:
Everything was new, the whole world was new, being able to ride my big wheel down the street.

C: Back
in the nineties, man, it was about the all the parties. I’m from Connecticut and
I remember how exciting the parties were in New York at the time.

I: Hey Chum,
how long does this pasta last?

C: Five
days at the most.

I: No, not
the leftovers in the fridge. I’m talking about the one in the box.

C:
Shoot, it could last forever.

I: We’re
both cooking dinner over here, but yeah, back in the day going to New York was
exciting, but now I got to New York like twice a week. Everything back then was
so colorful and new; rappers were like musicians back then. We’d be like how
does he rap like that, how does he freestyle like that? Now it’s a process of honing
your craft, we just want to have fun.

C: Music
is supposed to flow, not sit there and rot.

What is about that old “new jack swing”
sound that you all find so liberating to rework into flows and the production?

C: When
all that stuff was coming out then, that stuff was exciting. I listen to it now
and it’s cheesy as shit. At that time it was so fresh and exciting, look at
these goofy dressed [dudes] with hoes! They got bitches! They got pussy!

I: Even
though they’re cheesy, even though they're fifteen years old you drop that at a
party and they go crazy!

C: Like
you drop “Poison,” (begins to sing Bell
Biv Devoe’s “Poison”) I sing that and I sound like DMC going through
puberty!

I: For
me, that style has never been done by a good MC and that’s what we’re here to
change. We just want to make good music
that people can just enjoy and not think too much about it; this way they can just
enjoy it.

The track “I’m the Best Mayne” is
a great prep for the larger than life “About Time,” before dropping into the
smooth “I’m So Cool.” Can this be interpreted as a personal biopic “song cycle”
on the album?

I:
That’s a great interpretation, but I just put them in the order that sounded
best. I personally appreciate the exegesis! Like when people first hear
“I’m the Best Mayne,” they think like, oh, this is his “down south” song like
Eli Porter battling Envy on that Iron Mic video:

And in
the middle he’s like, “I’m the best mayne. I deed it.” But our track “I’m the
Best Mayne” is just Chum, Has-Lo and myself having fun. A lot of people think I’m
the only one rapping on that song when they hear it, but there’s about four of
us on that track.

C: I’m
the asshole with the autotuner.

I: But
man, what if I told you that this album was the diet album? We did some more
stuff for a self titled album called Cool Aid. But this album is the “Flavor
Ade” version, before we release the real thing, so stay tuned.

“Run for Your Life” reminds me of
a seventies Rob Banks and the Dramatics style of production. What influenced
you and Chum to make this funky number?

C:
Somebody got mad about that beat…um, so a while ago a friend of mine who quoted
scriptures came over to my house and brought over with a whole bunch of
samples. So what I did was I chopped it up and we sat on it for six weeks.

“Run for Your Life” does bring to
mind that marathon you were training for, how did that go for you?

I: I
ran two hours and twenty-two minutes. I hadn’t ran in ten years. It was cool
though, I did it. After that I did a show, before the race I did a show and
then I had to get up at five in the morning for a check in. When it got to mile
three I realized I had to take a shit and there wasn’t a bathroom for another
mile! In the song I say I ran for this, and people at the show will tell me
they have Crohn’s and Colitis and it really humbles me. It was real cool; I
raised 4K as a result.

Describe the third renaissance of
hip-hop that you guys represent.

I: It’s
like the first renaissance was ‘88, hip-hop’s golden era. I wouldn’t call it
mine but everything was new and then ‘98 was the second renaissance where
mainstream rap was very tired. Now the third renaissance was like where the
musician works for the fans and the fans work with the musicians. The fans have
more buying power with the internet. They can choose whether or not they want to
pay for the album or just download it for free. It has leveled the playing
field for indie or major artists. If you have enough buzz you can be as big as
the major artists. Those people having that perfect knowledge of access to
what’s out there are making for a platform where only the stuff that people
like the most is going to get out. In this third renaissance, I bring something
other than the saturation of the mixtape game. I’m not into making mixtapes;
I’m into making a brand if you will, a brand you can trust.

That track “Take Steps” sounds
like the makings of a new dance craze. What kind of dance moves do you both
envision for people getting down on the dance floor?

I: I
don’t know, but there’s such a long break there I’m thinking damn, I should
have a dance there. I have been doing the running man in my sets, so it’s only
natural to do it while I’m recording it. I want to make a show like a concert,
where there are dancers, choreography, wardrobe switches and everything.

Do you need fly girls?

C: No, I
need dancing whores. Good ones.

I: Fill
out a Craigslist ad! Ha ha. We had a show in Portland, Maine and I fell asleep
or whatever, then wake up and there’s a girl in the room. I text Chum; did you
get a hooker? And he goes no, I got her on Craigslist.

C: It
was just some party bitch on a bender.

I: I
don’t know, but I’m going to do a video for it and I know at least Jazzy Jeff
will see it.

I: Ha
ha, Twitter is the best for when you’re drunk in the club and that’s pretty
much all it's good for.

I think he would tip his hat to
your carrying on of that old school torch.

I: He’d probably
get mad cause I curse in the songs. But I think I could ghost write for him.

C: Man,
I know Will Smith’s ghostwriter and he is expensive.

Describe the creative process of
creating patterns, lyrics and rhythm with your flows.

I: I
don’t know, I think I’m partly insane. (laughs)
You know, as for the patterns themselves it’s very mathematical. You got five
syllables here, you put five syllables there. My mind was melded from eighties
and nineties b-movies, I was completely influenced by those movies. What is
that one about these two aliens that came from outer space? You know, one would
shoot people with heroin and then suck the dopamine from their brains and then
there was another alien, who was a cop alien who dies and when he died, Dolph
Lundgren has to kill ‘em , but anways…

My
old stuff was like long bars, six minute songs. Now I’m just trying to have fun,
the delivery is there and the subjects are just easier. And then there’s always
bitches and hoes, you can always go into that! (laughs)

How is the sound, samples, synths
and beats manifested Chum?

C: I
just go with what sounds right, I don’t over think shit, wherever my
inspiration goes. There’s no set inspiration for everything. I don’t set up to
do a specific thing in the studio. I just sit down and let it go, there’s no
real method to it. I know producers who think like, got work on the drums
today, or got to chop up some samples today. Those might be inspirations, but
you got to take that inspiration and make it something that is you. None of us
ever sit down and know what exactly will happen. When I go into the studio I
don’t know if I’m going to make a beat, an electro sound, whatever happens,
happens. I don’t know what’s going to happen in that studio.

Who do you guys think does not
get the most credit in the hip-hop industry?

I: I honestly don’t care. I mean, every time
we’ve done stuff we’ve always done it to such a degree where it should have at
least got talked about more. Not that I have a sense of entitlement, but the
facts are there. We do some of the best live shows and put out the best tracks.

C: I
have produced albums for people that get sweated on a daily basis, but I think why
am I rotting in hell still? You’re sweating the album, and I’m like, come on
man, get your head out of your ass and give us credit.

Who gets too much credit in the
hip-hop industry?

I: Every
media darling!

C: I
could go off for days off the record on that…

I: At
the end of the day, I want to get my props. Everyone else can keep doing what
they’re doing just give me my thing.

Any plans to make it out to San
Francisco in the near future?

I. We’ve
never had a good show. When we do our shows, we try to make them parties. When
we’re on the bill, Chum will play jams to make people party and we try to blend
it all in. In America, there’s a show and there’s a party. Overseas, they party
and there just happens to be a rapper. People are having fun and as long as the
rapper is good then there’s always a party.

C:
Speaking of which, we’re going to party over at my buddy Murray’s house this
Saturday after the release party.

Thanks again for your time. Enjoy the pasta!