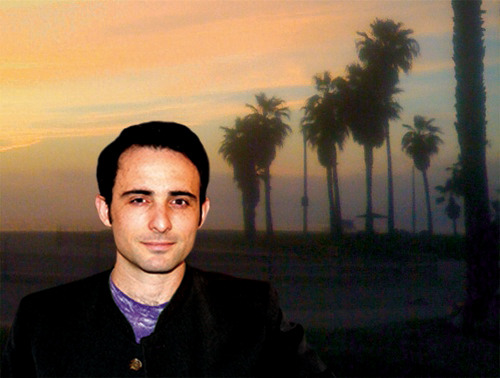 Farmer Dave Scher's first solo album is called Flash Forward to the Good Times (Kemado), and no title could be more appropriate. It's filled with sun-soaked California good vibrations and late night beach party jams. Unsurprisingly his contribution to Friends with Benefits makes you long for a never ending summer, just in time for shitty fall weather.

I've had many different jobs over the years.

I was a girl's volleyball team manager, worked on the Indiana Jones ride at Disneyland… but looking back at my time as a DJ at KXLU seems more and more like the raddest job I’ve ever had. It was a real treasure trove of an opportunity, sending me down my music road, and I'm damned grateful.

I Grew up “Beach Style” in Southern California, surfing, skateboarding, running around with friends, drawing comix, making videos, wanting to get tubed, listening to Dick Dale, dolphins, whales, but still, my musical references were pretty standard for a young dude from that part of the world.

It was the golden age of KROQ, so the soundtrack coming out of everybody’s cars and boom boxes was always pretty good back then. Growing up in Long Beach, NWA blew my mind, followed by Sublime, Snoop, the Pixies, Beastie Boys, Jane's Addiction, and Dinosaur Jr.

At the same time, I heard the churning of the big gears, the pull of the moon and the tides, the smell of the sage and flowers at Point Dume, the trees up in Big Sur, and the redwoods in Mendocino pulling me to west coast music from the past like Neil Young, the Byrds, Buffalo Springfield, Jefferson, Beach Boys… and even older feelings, wondering about the really old times Luiseño, Chumash, Gabrielino, and Pomo tribes… I was looking for more to hear in the world of sound.

After high school, I went to Loyola Marymount University home of KXLU 88.9 FM. Jose Salguero, the Program Director, hired me and gave me a shot at the beginner 2am-6am spot each week. The gig blew my mind wide open. Playing records and listening to them along with people in Radioland in four hour blocks was a great way of discovering many, many sounds.

And then there were the friends who were very passionate about records, up there listening to music and going bananas: Bahar Tolou, Tra Mi Callahan, Ben Knight, Brandt Larson, Danny Cavey, Jen Carrizo, the Rademakers, Chris Gunst, Jimmy Tamborello, Erik Cifuentes, Elvin Estela, Ian Mackinnon, Rex Thompson… we had a lot of fun. And the “Farmer” nickname. It was my DJ name that came from an ill-fated ant farm.

My DJ time ended when I finished school, and a new chapter began.

Psychedelic Pedal Steel guitar and the age of travel

My Dad bought me my first Hawaiian lap steel guitar at the Lark in The Morning shop in Mendocino.

It led to me playing with Beachwood Sparks and to traveling around the world and having adventures. Indians on the sky, prairie girls looking so pretty, eyes full of electric storms.

And now, several years and projects later, I’m living in Venice Beach, and KXLU’s signal comes in strong. Hearing the new guys/girls up there broadening their vistas has brought my own radio days back into focus. It’s not always an easy listen, but the fringe shouldn’t be long.

I still get to play records once in a while. Many of my friends from KXLU are now with Dublab, an online station. Those guys are really cool, and have a similar sense of adventure about sailing through the wide Sea of Sounds. I’m happy to get up there, and play some records, after years of travel, to loop back to an earlier time of John Fante, smurfing, coloring the landscape, and bicycling by the sea.

Recently, I stayed in and made a record that reminded me of those fun early times by the sea, influences and inspiration everywhere, sea land and sky… wallabees, reindeer gliding on, slide on through the cosmos till night melts into dawn skateboard gliding, bus surfing (not holding on w/ hands) and bending knees, dial it in to Endless Ride endless nature motion…

Cactus jams and misarrayed plans flashing / clanging like bells into being along the sea and around the beaches… studios with equipment, surfboards and feet throughout the day into the night… rolling tape, rolling highway, empty lodge hotels in the late summer… records drifting across the fields and screens.