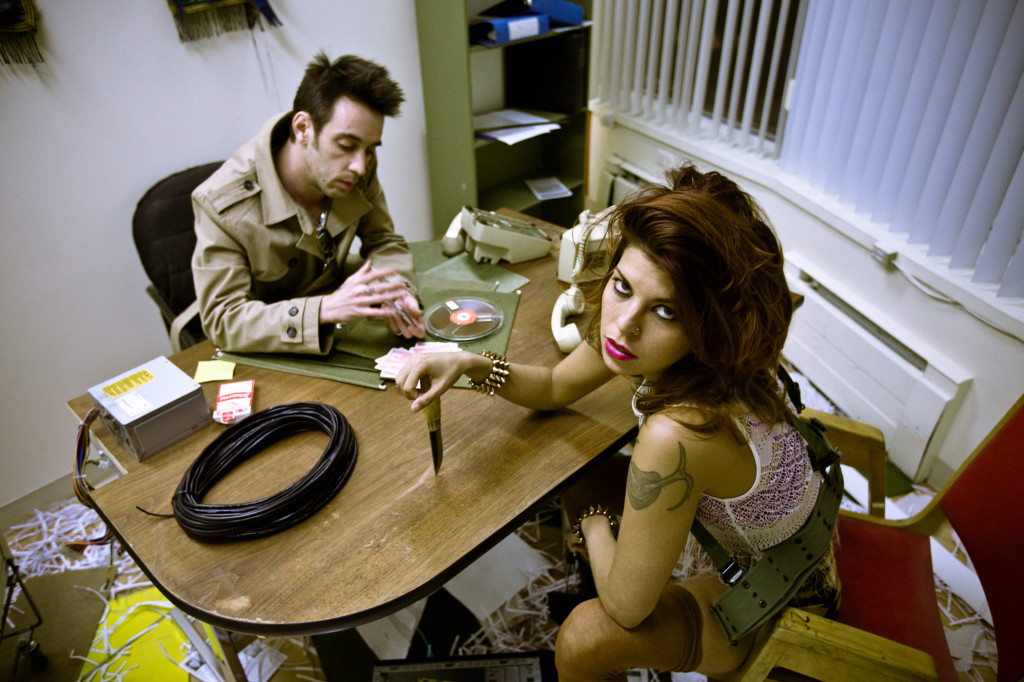 While most established bands are contented by the comforts of running the festival circuits and international tours of safe-travel country designations, Montreal's Handsome Furs tour the routes that most travel agents strongly advise against. In support of their excellent Sound Kaptial, husband and wife Dan Boeckner (of the former Wolf Parade) and Alexei Perry have pierced the iron veil of the former Soviet Union, Croatia, Sarajevo, Romania to the furthest reaches of South East Asia not featured in any Rick Steves travelogue. Upon return to Montreal, Alexei talked to us about their international adventures, the potential dangers, Sound Kapital and the global disparatity and unity of scenes.

Welcome back, how does it feel now with the completion of Sound Kapital?

I feel very proud of Sound Kapital and I’m very excited to talk about it with the world!

I think the last time we talked to you was after you and Dan finsihed Face Control. It seems like you’ve both been keeping with exploration of the Eastern blocs.

We definitely have been keeping in that mode of stuff like that especially since we have been travelling over to a lot of those places over east and lucky to have friends that helped us out a lot of the way. Things like making sure we arrived safely at our hotel, making sure we could get in with illegal visas, making sure authorities didn’t find out the show, lots of travelling under different pretenses.

How did you manage to sneak in?

Well like when we were at airport in Yangon, when the customs officials were checking our luggage they would put a chalk mark on your suitcase if there was any items like electronics or anything that would be of interest or a red flag to them. So that means they would go through your belongings if you had a chalk on your suitcase and we didn’t want them to know we had instruments so we wiped the chalk off our luggage so the customs official would let us through. It was pretty scary but we went everywhere we could. The shows had to be secret, no promotion, everything was word of mouth but it was an incredible time.

Wild, that is like something you would watch on one of those National Geographic smugglers shows.

Yeah I know I’m hesitant to talk too much about it because I really want to go back!

Well, with ringing endorsements! I was wondering with tracks like “Bury Me Standing,” the lyrics sound like they might have come from one of your own poetic prose pieces prior to the song. How did that come about?

I wrote that but it comes from a Romanian saying that goes, “bury me standing, I have been on my knees all my life,” we had recently toured in Romania and and I was also using some of those sayings in my writing. I mean it’s a song that has to do a lot with sayings and expressions that have double meanings.

You and Dan have a very international approach with all the places and people involved, like your production team abroad.

Yeah, we are fortunate to work with the good people Antti Joas and Jonas Verwijnen in Helsinki and Berlin. They are so nice and we are grateful to have their help.

I’m interestde from reading about your approach to recording if you will forgive the press release reference to 'writing the album as quick and possible on synthesizers.' How did that approach to album craft come about?

You know we have done so much of our writing on the road and between sound checks so once we’re in the studio we were able to work on these ideas that had developed over the course of the last tour.

So you guys have your own studio in Montreal and then satellite studios in Helsinki and Berlin?

Basically the way it works is that we record at our own studio in Montreal where we lay down the rough tracks and then we e-mail to Kaiku Studios in Berlin where we send them a new track for production while we would move on to lay the ground work for the next track. A lot of late nights of working on material, sending it out and they send it back to us…

Some wild coordination, which begs the question, being that you guys are a pan-global force to be reckoned with, what to you is Sound Kapital?

The reason we titled it Sound Kapital is to be more of a reference to a music scene for the whole world. I feel like when we play in Beijing or Belgrade, or Belarus or Shanghai and we get to be part of a scene that is growing and even though the scenes there are so wildly, wildly different from each other and feeling a sense kinship with the people we’re playing with and I think we wanted to Sound Kapital to represent something from this unique international scene that we feel lucky to have been a part of.

So from all of your travels where was some of the most interesting punk scenes?

I would definitely say Beijing has a wild scene. Also Macedonia, Bernay’s Propaganda was pretty cool and they would take us to all these places that we had never been to. We feel very lucky to be so close and to have played shows with them and for their support.

With tracks like “Serve the People,” who and what needs to serve the populous?

Well yeah, that line comes from Mao and was inspired by the peoples struggle in Myanmar, Singapore . These are people who live under the threat of this oppressive regime who are doing what they can with limited means. Despite their conditions they are living out their lives in secret in countries without democratic civil liberties.

And with tracks like “No Feeling,” I was wondering how did you manage to put so much, um, feeling into it?

Ha ha, yeah, I really like that one, but uh, let me think! With that song we were working on that one like late, you know and we felt wiped, almost without feeling but…

How did it become a 7 minute epic?

I don’t know, ha ha, we were at the studio late and just rocking out as hard as we could and having so much fun as we could have!

Well it’s incredible what you guys do where it seems like so many different people whereas you guys go as far reaching to the corners of South East Asia and beyond.

Well Dan and I enjoy working with different people and seeing what other people do with their music and we love to travel as far as possible and meet as many people as we can. We really feel fortunate to have been able to find so much support from people who probably had never heard our music before but who were excited to be a part of something.

Well it’s incredible what you guys do where it seems like so many different people whereas you guys go as far reaching to the corners of South East Asia and beyond.

Well Dan and I enjoy working with different people and seeing what other people do with their music and we love to travel as far as possible and meet as many people as we can. We really feel fortunate to have been able to find so much support from people who probably had never heard our music before but who were excited to be a part of something.