In The Atomic Garden with Jack Shirley 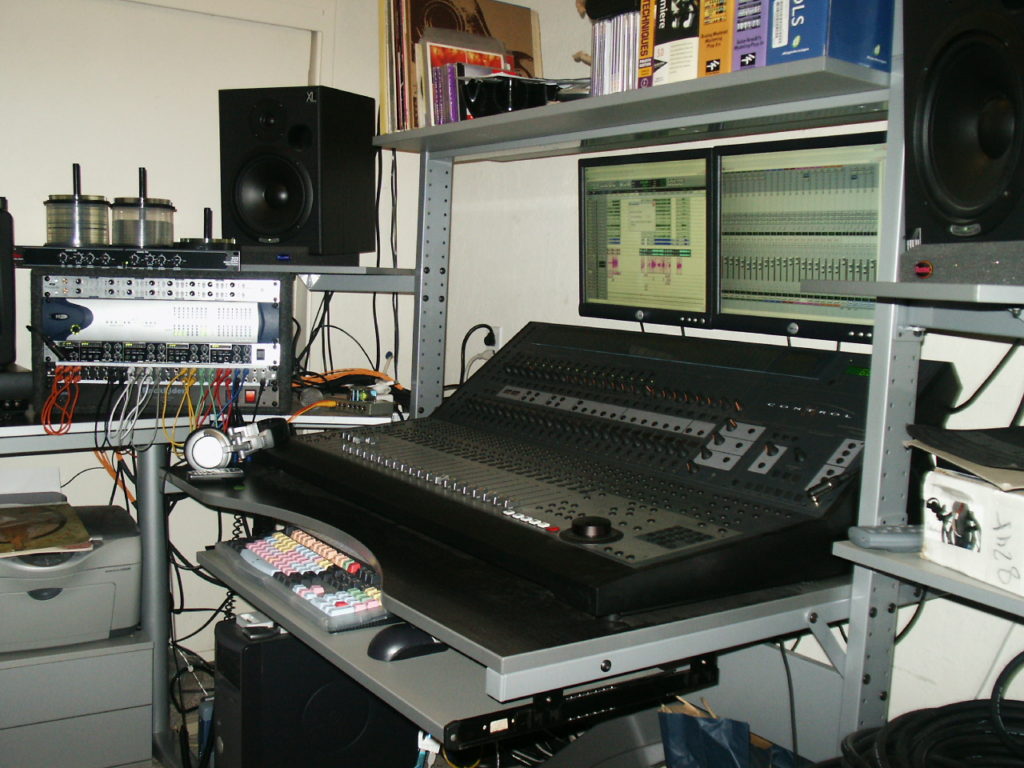 It’s 2003 and 22-year-old Jack Shirley is enduring 80 hour weeks working in an auto body shop, studying illustration at San Jose State University, and pursuing what’s for now a mere hobby: recording bands out of his bedroom in San Carlos. The Shitbox, a name that belies how well-organized Shirley is, had sprawled into his parents’ garage and annexed his bedroom to a closet, in order to accommodate a mixing console and large, equipment-laden steel desk. This schedule, Shirley recalls in a recent interview, was a “little fucked up,” but it was the last time his young life felt conventionally structured, shortly before abandoning job and school in favor of self-booked tours and nonstop recording.

13 years later, 34-year old Shirley and I talk outside Oakland’s Timeless Coffee, where he can be found without fail every Sunday morning. The cafe is worth the trek for him, not only for it’s vegan breakfast (Shirley is 10 years vegan, and makes his own vegan ice cream when not recording) but it also serves as a sort of hub for fans of more extreme music, many of the staff and regulars having recorded with him, or at the very least listened to a Shirley recording. We discuss how The Shitbox evolved, slowly, into a profession and an East Palo Alto recording studio called The Atomic Garden. Now, the studio is an international destination for underground bands interested in a live, analog sound, successful artists such as Deafheaven and Tony Molina helping further cement its status. If you live in the Bay, it’s near impossible to avoid a Shirley recording, his unique production talents tie together a constellation of musicians disparate, from punk to hardcore to pop, the sounds coming out of this warehouse in Palo Alto are turning heads, and it’s Shirley’s intense drive propelling it all.

“We had a whole system going at my parents’ house,” Shirley says, alluding to early analog experiments in high school. He’d wait for his parents to leave for the weekend, convene his band, and convert his house into a makeshift studio, separating players in different rooms and stringing together PA’s to record live to tape, something he tells me he would later realize was “a very old school and big boy technique for recording, but I just figured if we did all that we would have our demo as soon as we finished.” However, after a series of bad recording experiences, Jack decided to pursue it more seriously on his own, to “remove the middle man” between him and making a record.

“To me, being a guitar player meant I had an awareness of how to manipulate sound, so it meant that going into recording I knew what I wanted it to sound like,” he says. “I didn’t necessarily know how to get it to sound that way, but I knew what I wanted.” Feeling that things were getting too meticulous, Shirley took over mixing duties on a session for his band Ones Own Ruin, learning ProTools through trial and error, “It taught me that this was something I really loved and had a drive for,” he recalls. “It’s the beginning of everything that’s happening now.”

In 2004, Jack and his brother Steven formed Comadre, a blistering punk band that would become the flagship for Jack’s early recording career. Shirley handled all of their recordings, engineering and producing their first two records out of the studio in his parents’ garage, flipping his bed up against the wall in his closet to create an enclosed space for recording guitars. His setup around this time was still entirely digital, an important distinction for someone whose current goal is to record bands without the aid of a computer. I ask him if he felt he’d developed a sound at this point and he shakes his head. “No it was still too early,” he says. “When you don’t know anything you don’t know enough to fuck it up, so you keep it really simple.”

Comadre’s second record, Burn Your Bones, garnered the band international attention, but has received two retrospective remixes from Shirley over the years, who insists that he experimented too much. “When you put two mics on a cabinet but you don’t know what phase relationships are you end up doing more harm than good.”

2006 is a seminal year, only two semesters away from receiving a BFA in illustration at San Jose State, a prestigious program that was sending graduates “straight to Pixar, Dreamworks and shit”, Jack opted to cash in his credits for a general BA and pursue recording full time. “When I woke up in the morning I wanted to record bands,” he recalls. “These people wanted to draw”. Jack dismantled the Shitbox, and moved into a warehouse in East Palo Alto. He called it The Atomic Garden, poking fun the stereotypically grandiose studio name, and knowingly choosing one himself (throwing in a Bad Religion reference for good measure). With low overhead and a steady stream of bands, the once spare warehouse quickly began to fill out, analog equipment encroaching on all sides.

When you walk into the warehouse that is The Atomic Garden, you enter first into the live room, a moderately large space, it’s dark, wood floors intricately scraped bare by a decade of moving heavy equipment. Sound proofing lines the walls in evenly spaced intervals, as do mic stands, only punctuated by a piano, and a drum set stacked neatly in the corner. Proceeding, there’s the control room, which is of main interest. Shelving on one side houses records Shirley has worked on, small percussive instruments, guitar effects pedals, and his root beer collection, which takes up the most shelving. There’s not much standing room around the central couch; in tetris like fashion amps are stacked and guitars hang from the wall, there’s a tape reel with another stacked on top of it next to vintage effects equipment, more tape machines with extra reels stacked below them, and dominating the space is a mixing console that looks like a prop from 2001: A Space Odyssey.

Jack agrees, that although flexible, he’s developed an Atomic Garden ‘house sound’, borne out of years playing in visceral live bands and the desire to capture the sound of collaboration. “Right away I didn’t want to do the track by track thing, to me it’s a second nature thing,” he says, “I want to record the way I have band practice or the way I play a show, because that’s where the energy is.”  Several records can be credited as directly inspiring the Shirley sound, records he feels capture the essence of rock recording. He references ACDC’s Back in Black as a seminal recording, and when he describes it, it sounds like he’s describing one of his own recordings, “The frequency balance is perfect.. The drums are super punchy and upfront, guitars have the most healthy midrange, not grating but fills everything out, drums are crispy on top, really 3D and hi-fi.” Drum and bass prominence are hallmarks of a Shirley recording, and he insists that it’s just Back in Black combined with Jimmy Eat World’s Bleed American – a rhythm central approach to guitar music.

The record that Jack has obsessed over in perhaps the most detail is Refused’s The Shape of Punk to Come, listening to only the left or right channel and pouring over the drum miking techniques. “This actually goes back to my art education,” he says, “you learn that good artists use reference, it’s a really important part of the process, if you’re an artist and you’re painting a turtle you don’t try and remember what a turtle looks like and do your best drawing of it, you look at twenty pictures of one.” The Shirley sound is huge, and paired with good songs, it’s hard to deny the in your face power of it. Slowly building over the years, there’s a community of bands that have stuck with him and helped the Atomic Garden grow. Comadre, of course, but also powerhouse screamo quartet Loma Prieta, and more recently Deafheaven, whose melodic take on black metal has won them over a large audience. The Shirley sound doesn’t only work for ‘heavy’ bands, it’s served artists like Tony Molina, whose 70’s influenced pop music catapulted him to the esteemed Matador Records.

Central to Jack’s approach is the importance of the ‘recording chain’, from source to capture, every step becomes less significant, the tuning of a snare drum more important than what mic or preamp it’s running through. This philosophy informed his early approach, which was largely hands off, acting more as a sort of documentarian than a producer. In recent years he’s extended his reach, warning bands of sonic pitfalls and nudging away from post-production, emphasizing the weight of the live performance. “I wanted to have the studio outfitted in such a way that I could make a record without a computer” he says of his equipment quest. Besides Shirley’s production skills, the technology at the studio is part of the sound, the analog equipment imbuing his recordings with a unique presence and warmth.

Though he remains modest, insisting nothing he’s doing is genius or new in any way, the sounds that are coming out of Shirley’s studio put him in league with engineers like Kurt Ballou (Converge, Modern Life is War, Nails), Mark Trombino (Jimmy Eat World, Blink 182, Drive Like Jehu), and even Steve Albini (Nirvana, Pixies, Cheap Trick). 2016 will see him relocating to East Oakland, and almost tripling the size of The Atomic Garden, not to mention partnering with an additional engineer to take pressure off his calendar (which gets booked out 6 months in advance), and the workload that comes with being involved in at least 100 records a year. Nothing else is changing though, Shirley has never turned a band down and doesn’t plan on it. “I like working with young people, and punk kids in young bands, there’s a lot of fire in all that shit and it’s cool to be there.” The foundation he’s built over the last ten years has been no small feat, and it’s without a doubt cemented his place in the Bay Area.

When he first moved into the warehouse space, Shirley woke up on a Monday morning, and for the first time in his life had no schedule to follow, no prescribed responsibilities to fulfill. “What am I gonna do today?,” he recalls thinking. “Whatever the fuck I want.”