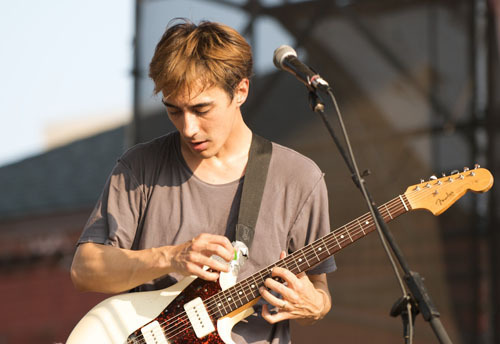 Liars' core-songwriter (with Angus Andrew) and nominal guitarist Aaron Hemphill is not as quiet as his press photos or stage presence indicate, and in fact had quite a bit to say about his band's latest record, Sisterworld, how it's the instinctual response to the cliché of California beach culture, and why the future of Liars could end up in a film lot.

I really heard Sisterworld as an album influenced by Los Angeles, especially after the press release told me to.

Definitely. With that comes the question of what does an L.A. record sound like. And I think [laughs] it's hard to verify the specific city of Los Angeles. But for us L.A. is my home town where I was born and raised and I think it depends a lot on whether you've been to L.A. or not: there's that difference of what is stereotypically viewed as Los Angles versus what actually is Los Angeles.

It's a wide target to hit. The whole theme of the album is pretty wide. We wanted it to be pretty vague so people could apply it to their own life rather than searching for an answer from us that would only realy make us look smarter than we are. [Laughs.]

Well the thing that struck me about it, even compared to your last album, is how weird it is, and how dark, and how it's the opposite of a cliché California record.

One of the perspectives is from Angus, who didn't grow up here his whole life. This stereotype of Los Angeles being sunny California, there's actors and actresses, everyone's beautiful and handsome; I think what such a clear stereotype of a city does is when you don't see that, when you see the real life, it's a more shocking contrast, versus, say I don't really know what the stereotype of Minneapolis is, I go there with more of an open mind, I suppose.

Some of the songs are almost hardcore. There's a violence in the lyrics and style that went farther than you guys have gone, at least since the first couple albums.

I think Angus and I both felt we weren't hearing enough darker or heavier music that connected with the not-so-pleasant things in this world and I think generally we wanted to hear an album that we couldn't find available. I think that we also wanted to work more on song structure and changes and direction and I think that somehow loosely reflects the surrounding and the subject material that we were focusing on. It provides a better soundscape rather than say repetition, which is almost like a hypnosis or a lull into a mantra.

Do you think this is the farthest you've gone in terms of structure?

I would think so. I think when me and Angus first started making songs we made some pretty strange structures, but no one's ever really heard that. So we tried to do more intricate things and have more parts. I think some of our structures before had been odd but they were more linear and based around repetition and with this, we were trying to appropriate a traditional songwriting structure into what we were doing, and making that the challenge. Like writing an outro. [Laughs.]

Structure is so L.A.

When I think about L.A. records that I really like, I think Love records, or we all like The Doors a lot, and they have interesting structures and they go different places and make turns in the tone of the structure. There's also the Germ's first record which is an L.A. classic and that's pretty straightforward. I think it has to reflect me being a native of Los Angeles and Angus being a new resident; it couldn't just have the immediacy of a Germs record and it couldn't just have baroque – like say a Doors record.

All the records that you listed are also pivotal because they reflect their times so well. This is a wide idea, but how do you think Sisterworld does that?

I could only speak on behalf of us, but I think we feel very uncertain. I feel very confused. Anytime I think about the world and how I can be a part of the solution that is actually achievable or worth putting any momentum into, I feel pretty lost and pretty scared and I think I tried my best to put that into the album and I think what makes records documents of an era, it involves the public finding the same sort of feelings and emotions in the records, whether or not the album has done that- it's something that we can't really take that much credit for.

Do you pay attention to “trends”? The past year was infatuated with the cliché of California summer music, and that has reflected a sort of escapism, in a similar vein of that uncertainty…

The appropriation of California beach culture? More and more while I was on tour, people would use lingo that's typically Californian or surf lingo or surf imagery and sometimes people do it well and I'm not trying to play referee but I've surfed since I was a teenager and I was born and raised in L.A. and I live a block from the beach and I made Sisterworld.

It's not to combat people who are being creative and appropriating their idea of what L.A. is. I would prefer to do things in the spirit of offering another option that you can't take for granted. You can't take the influence L.A. has for granted in thinking that you can just produce a reverb pop record. You know, Love didn't do that, The Doors didn't do that and the Germs are playful but there's a darkness to that record too.

An amazing outcome of people hearing our record is that even if they hate it, they'll know that there's a darker side to things that come from LA.

Do you guys keep any roots in New York or Berlin?

We have some friends we made. In New York, the Sightings guys or Oneida, but we don't really hang out too much, we're kind of loners. We kind of do the band and mainly talk to each other. We tour so much that it's hard to actually see the people we're firends with.

These? Oh, I haven't really heard much of them.

Did you guys ever talk about why Pat [Noecker, of These Are Powers] and Ron [Albertson] left the band?

It was a creative thing. I think Pat and Ron came from a more traditional band arrangement where you go down into the basement and hash out things and it's ultimately a democracy. Angus and I, we moved to New York and started making tapes on a four track. And we would write songs individually. And that's how we met those guys, we put up a flyer and we gave them a tape of 19 songs and probably 70% of which ended up on the debut album and they learned the songs and we played them live. So it was kind of a clashing of how we really made material, and for them to be happy they sort of had to have it a certain way.

Are there more videos coming out to accompany Sisterworld?

There is. I can't really talk to much about it, and it's not finished yet and they hate it if- Well. One of us is going to try to do a video. [Laughs.] We've done videos in the past but I don't want to talk about it in case something bad happens. I don't want to promise something we can't deliver. We'll find out really soon if that will materialize or not.

Have you shot it yet?

No, that's the problem. I'm kind of sad that MTV or VH1 don't play video but at the same time it means making a video is less formal – if a friend is like, “Oh I want to make a video for this song,” they can do it for their own sake and some people will see it on Vimeo or Youtube or all that.

I think the next single is “The Overachiever”, that one will probably have a video.

Man… No, we don't. I think we work in a very unique way. We're rarely all together. We're all together now to rehearse for tour and get the sound right, but as I mentioned before we don't write songs together in a room, we're very different people and we truly appreciate the difference in persepective that each of us offers, it's interesting, we haven't sat down to really talk about something as deep as that, I know we've thought about it, and it's kind of a scary thing, you know.

I think when we work on a project, especially this record, we just focus on the task at hand and pretty much immsere ourselves fully into it. And we sort of jump without looking. What's the phrase – diving in the pool without checking if there's water. I think that's how we approach every project and also why we've moved so many places and been able to be productive in different locations. To question the lifespan during those moments is sort of corrosive, but I think it always means we have something new to work on that we're excited about it doesn't need to be waning. I think every record we've done I genuinely feel like we made a record we wanted to hear we didn't feel like we could get it from someone else.

I know that Angus and I will always write songs and it doesn't seem like Liars would end anytime soon. I don't know. We could still just direct films but I think we'd still do it under the Liars name. In that sense maybe what Liars does could morp.

Turn into a production company.

When we first got together, we always sort of imagined things like that. I think Liars is already a production team, we don't really specify what instruments each of us play on the albums, or on what songs. The truth of the matter is, one person sometimes plays all the instruments on a song on the record.

Were any of the songs from this album that for you?

Oh no, not in that sense. Like this is so-and-so's song let him do it by himself. We sort of have the mentaltiy of a production team where we're not promoting me as a guitar player or Julian as a drummer because we do so many other things, and Angus too. I think it'd be very easy to work under different names as long as we appraoch the creative process the same.

It doesn't sound like you guys have the normal wear and tear of a touring band or something, that there's a lot more autonomy and freedom.

I think the result of us having that approach, and we just really respect each other's working habit and Liars to us is that process. It's how the idea comes together, that's such a limited object or mode for an operation, for a band.